Red Robin Gourmet Burgers (NASDAQ:RRGB) beat expectations when it reported first-quarter results recently and showed signs that the worst of its struggles may finally be history. Shares shot up by more than 20% as a result. 2017 looks like it could be a much different year for the chain than the last couple. 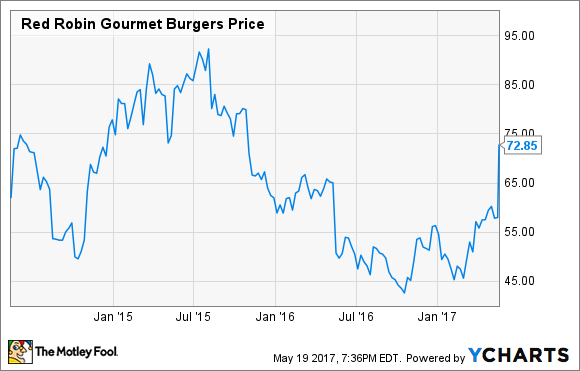 In the last year, the state of the restaurant industry has begun to look a lot like a barbell: growing on either end, with a shrinking middle. According to TDn2K, a service sector analytics company, comparable sales at casual-dining and fast-casual chains have been worse off than fine dining and fast food for over a year now.

The whole restaurant industry has been struggling, though, with average sales at individual locations falling since the end of 2015. Problems started to crop up as new store openings outstripped demand, and then started to cannibalize foot traffic from existing restaurants. The worst industry performance since the financial crisis came in the fourth quarter of 2016, with comps coming in down 2.4%, but the red has started to ease as of late. 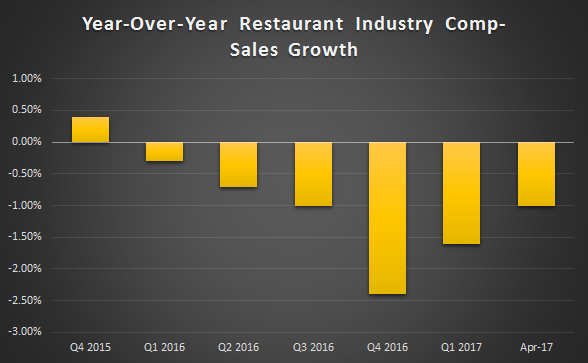 Indications are that the effects of the "restaurant recession" are starting to wane, and although Red Robin's casual family dining segment has been one of the poorest-performing segments, the April report showed it starting to improve a bit. Specifically for Red Robin, though, the last quarter was a good one in comparative terms.

Beating the average competition is a good thing, but it doesn't mean all is well. While comparable sales for restaurants were down 1.6% in the first quarter of the year, according to TDn2K, Red Robin reported comps down only 1.2% in its quarter ended April 16 thanks to falling traffic partially offset by higher total bills. That was also a big improvement from the 4.3% decline at the end of 2016. 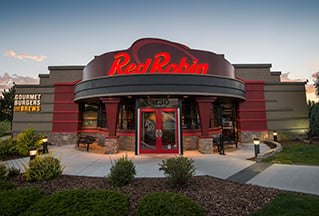 Revenue was up in the most recent quarter from a few new restaurants in operation as well as the acquisition of 14 previously franchised locations last year, but profits were down compared to the same period in 2016. In addition to the fall in foot traffic, the bottom line was affected by rising labor costs.

With profits down so much from last year, why did investors push the shares up? It has to do with the dire outlook given during the end-of-2016 report, where the company called for first-quarter earnings per share of $0.40 to $0.60. As it turns out, things were not nearly as bad as forecast and the "beat" fueled investor opimism.

2017 is off to a positive start for Red Robin, but headwinds remain, chief among them finding ways to sell more burgers and the never-ending management of rising food and labor costs.

The improvement in comparable sales was a good thing, though, as it was much-needed after how last year ended. The restaurant industry as a whole notching its first quarter-over-quarter improvement in some time also bodes well for Red Robin. It's too early to call an end to the restaurant recession, but there has been meaningful progress. So far, this year is providing a much-needed breather for owners of the business.