Warren Buffett transformed Berkshire Hathaway (NYSE:BRK.A) (NYSE:BRK.B) from a dying mill company to the massive conglomerate that it is today. Over more than half a century, Berkshire has achieved distinction as one of the most successful long-term stock investments in the market, and along the way, it has celebrated several key milestones. The following events have gone a long way toward defining the history of Berkshire Hathaway's stock, and investors hope that its past performance will make shares a good value going forward as well.

Buffett's stake in Berkshire Hathaway dates back to the 1960s, when his partnership identified the company as a cheap stock in the declining textile industry. Buffett identified that when Berkshire closed a mill, it would buy back stock, giving him an opportunity to turn a profit. Yet by 1964, Buffett owned a considerable amount of stock. At one point, Berkshire offered to buy back his stake, and they agreed orally to a price of $11.50 per share. Yet when the actual offer came, it was for $11.375 per share. That angered Buffett and inspired him to buy a controlling interest in Berkshire, and that laid the foundation for the company that eventually grew far beyond its textile industry roots. 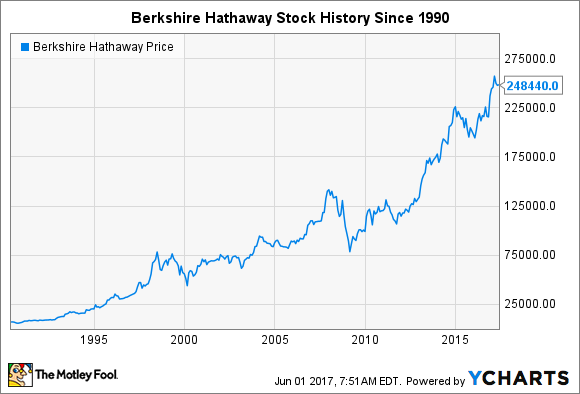 One key attribute of Berkshire Hathaway's renown is its huge share price. The company has eschewed stock splits in its Class A shares, allowing them to appreciate as far as the market was willing to carry them. That took the stock to the $1,000 mark by 1983, which at the time was even rarer than it is today. It took just six years for Berkshire to climb from $100 to $1,000 per share, and another nine years brought the company's share price to the $10,000 mark by 1992.

That strong performance outpaced the overall market, but it was supported by fundamentals. Each year, Berkshire has posted the gains in its per-share book value, and the trajectory bears a strong resemblance to its stock performance. Without actual business growth, Berkshire wouldn't have seen its share price reach unprecedented heights. 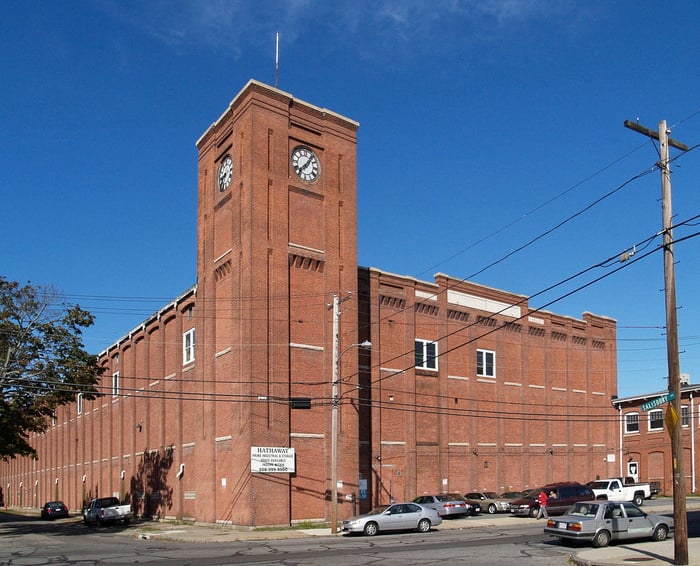 3. Reaching out to small investors with Class B shares

In 1996, Berkshire Hathaway created its Class B shares, giving the right to existing Class A shareholders to convert each share of Class A stock into 30 shares of Class B stock at will. The net impact was to give small investors a way to invest in Berkshire, which at the time commanded more than $30,000 per Class A share.

Buffett didn't want to make the move, but he did so in response to financial entrepreneurs who sought to create an alternative investment vehicle to make Berkshire accessible to those with modest amounts of capital. Rather than allowing outsiders to reap fees, Buffett instead made the move himself, potentially saving ordinary investors thousands of dollars in added costs over the years and creating a way for them to participate in Berkshire's amazing run.

Similarly, Buffett was never a fan of stock splits, but exigent circumstances did make one prudent. In 2010, Berkshire did a 50-for-1 split of its Class B stock. That made the shares more accessible to shareholders in railroad giant Burlington Northern when Berkshire bought out the company. The move allowed more Burlington shareholders to retain interests in Berkshire stock rather than having to liquidate what would have been fractional shares. Now, Class A shares are convertible to 1,500 Class B shares, and the current Class B price around $165 per share is squarely within the range of where typical stocks in the market trade.

In the past quarter-century, Berkshire's share price growth has slowed, but it has hardly come to a standstill. Just 14 years after reaching $10,000 per share for the first time, Berkshire hit the $100,000 mark in October 2006. Just a decade later, Berkshire stock fetched $250,000 per share, and that's close to its current level today.

Berkshire Hathaway looks little like it did half a century ago, and the way it has transformed itself is a testament to the investing prowess of Warren Buffett and his team. Long-time Berkshire shareholders have confidence that the company's legacy will survive Buffett and keep the stock's history looking favorable for decades to come.