When a company has to turn itself around, progress often comes in fits and starts. The home furnishings retailer formerly known as Restoration Hardware (NYSE:RH) has had to deal with plenty of ups and downs in its business, but earlier this year, RH had investors feeling good about its prospects for a full recovery.

Coming into Thursday's fiscal first-quarter financial report, RH investors wanted to see a reversal of the retailer's year-earlier loss and solid sales growth. RH delivered on both fronts, but its conservative guidance for the remainder of the year came as a big disappointment to those who wanted to see positive momentum continue. Let's take a closer look at Restoration Hardware and what its results say about its future. 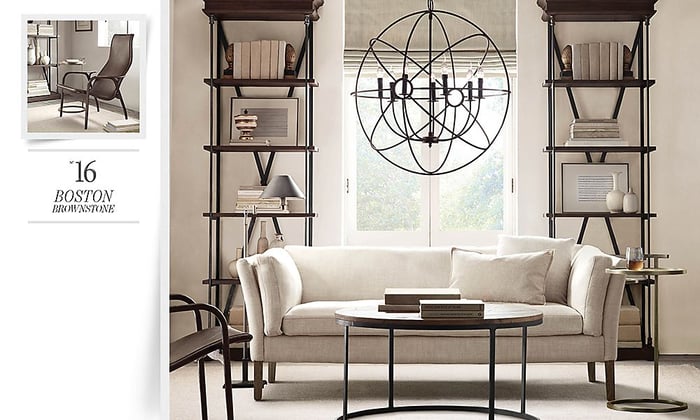 Restoration Hardware's first-quarter results had some real positives. Revenue jumped 23% to $562.1 million, and RH was able to exceed expectations among investors by a thin margin on the top line. GAAP net losses narrowed considerably from year-ago levels, and after making allowances for extraordinary items, adjusted net income of $1.79 million translated to $0.05 per share, matching the consensus forecast and reversing year-ago losses.

Looking more closely at RH's report, the retailer got strong performance from several quarters. The company said the acquisition of Waterworks accounted for about six percentage points of revenue growth, and six more came from inventory optimization efforts through RH's outlet and warehouse sales. That left 11% organic growth for RH, and growth in comparable brand revenue weighed in at 9%. That was far better than the declines RH has posted in recent quarters, as the company finally reached the one-year mark from the launch of its membership program. Growth was well balanced between stores and direct-to-consumer business, and RH benefited from a 26% jump in square footage and a 16-store rise in store count, to 85 locations.

RH spent a lot of time talking about its accomplishments. The company said its efforts to move to its membership model, redesign its supply chain, improve inventory management, and roll out various business initiatives have generally gone well and should help RH grow this year and beyond.

CEO Gary Friedman was aware of some of the controversy surrounding RH's efforts. "We understand that many of the strategies we are pursuing ... all are in direct conflict with conventional wisdom," Friedman said, "and the strategies being pursued by many in the industry." Nevertheless, the CEO thinks RH is "building a brand with no peer, creating a customer experience that cannot be replicated online, and have total control of our content from concept to customer," and that's worth taking criticism.

Why are investors unhappy with RH?

Yet the problem RH faces is that investors don't seem to be entirely on board with the sacrifices they've had to make in pursuit of the retailer's long-term vision. As Friedman put it, "We are taking a cautiously optimistic approach to our outlook given the uncertain macro environment in addition to the many initiatives and investments we are undertaking."

That showed up in mixed changes to RH's guidance. For the full fiscal 2017 year, RH now thinks revenue will be between $2.4 billion and $2.45 billion, as the company boosts the pace of inventory reduction and improves its product offerings. That's $50 million to $100 million higher than it anticipated last quarter. However, new earnings projections of $1.67 to $1.94 per share represents a $0.14 to $0.25 per share cut from its previous guidance, or roughly $5 million to $10 million, all told. That was a major disappointment for those seeking a faster return to strong profits.

Also, the speed with which RH wants to get rid of inventory will have big implications for the second quarter. Revenue of $595 million to $610 million would be 9% to 12% higher than last year's second quarter, but adjusted net income of $13 million to $15 million would only work out to $0.38 to $0.43 per share, far below the consensus forecast for $0.65 per share on the bottom line.

RH investors weren't happy with that guidance, and the stock plummeted 23% in after-hours trading following the announcement. Whatever you call the company, RH is running out of time, and if it can't make good on its promises to take the 2016 rebuilding year and turn it into a successful 2017, then investors might well run out of patience as well.