A big increase in first-quarter profits and a good month on the race track helped push Ferrari's stock higher in May.

Forza Cavallino Rampante! Shares of supercar maker Ferrari N.V. (RACE -0.74%) -- whose symbol inspired the racing cheer here, which translates roughly from Italian as "Go, Prancing Horse!" -- were on a very hot lap in May, racing up 14.5% during the period to close out the month at $86.72.

Why the big gain? Here's a clue: Much of the increase happened early in the month, after Ferrari's first-quarter earnings report on May 4. 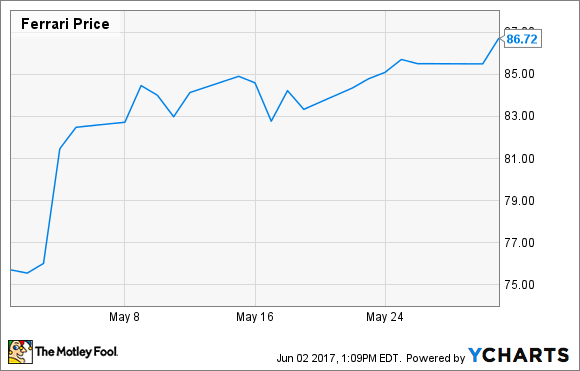 Ferrari reported the best kind of earnings news: a 60% year-over-year increase in profit, along with an eye-popping 21.6% EBIT profit margin. ("EBIT" is earnings before interest and taxes.) That latter number is simply stunning for an automaker, but it's not a fluke: It's simply clear evidence of Ferrari's tremendous pricing power -- a power that CEO Sergio Marchionne is determined to exercise fully. 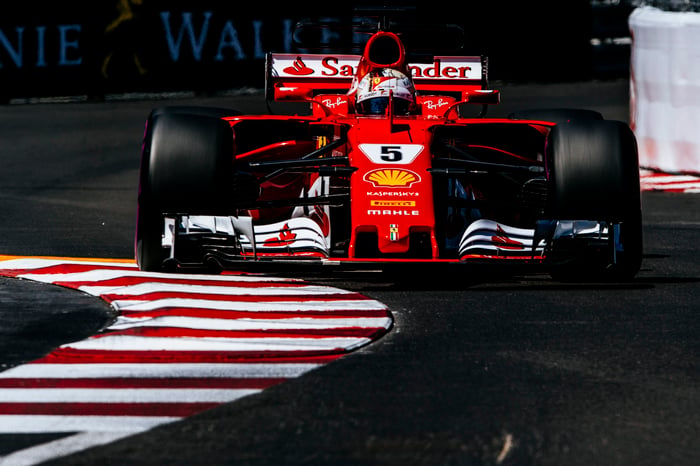 Ferrari's Sebastian Vettel on his way to a win at the Monaco Grand Prix on May 28. Image source: Ferrari N.V.

Ferrari's profit growth and margin were the big news, but upbeat full-year guidance didn't hurt the stock price any. Nor did it hurt when later in May, Ferrari's star Formula 1 racing driver, Sebastian Vettel, brought home a second-place trophy from Spain and an outright win at the Monaco Grand Prix.

(You may think racing is just for fun, but consider: Ferrari's racing team isn't just one of the most widely followed sports teams in the world and a key marketing tool for the brand, it's also a nice generator of revenue via sponsorships. That revenue is highest when the team is winning.)

Marchionne has set in motion several potential drivers of profit growth. We'll have an update on how those are proceeding when Ferrari reports its second-quarter earnings on Aug. 2.