Shares of ExOne Company (NASDAQ:XONE) soared 30.4% in May, according to data from S&P Global Market Intelligence. The industrial 3D printing specialist's stock has gained 41.2% in 2017 through June 2. 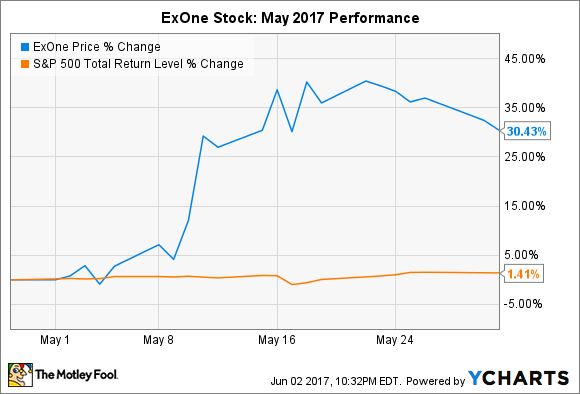 We can attribute ExOne stock's powerful monthly performance to the company's release of its first-quarter 2017 earnings on May 10. On that day, the stock jumped 7.6%, and it tacked on 15.3% the next day following the company's analyst conference call.

For the quarter, revenue grew 29% to $10.9 million, net loss widened 24% to $6.8 million, and loss per share expanded 20% to $0.42. Investors were likely pleased with the solid increase in revenue, which included a 95% jump in revenue from sales of 3D printers. Five printers were sold in the quarter, versus one in the year-ago quarter. Moreover, investors were probably encouraged by the 19% sequential growth in backlog to $23.5 million, and management's statement that the company is on track to achieve its goal of positive adjusted earnings before interest, taxes, depreciation, and amortization (EBITDA) by year's end.

Current ExOne investors are surely pleased with a 30% gain in one month and a year-to-date gain of 41%. However, I wouldn't advise new investors to jump in without abandon.

There were some positives in the earnings release and on the conference call. However, the company has yet to prove it has a sustainable business model and can turn a profit. Moreover, analysts don't expect it to be profitable five years out. ExOne is worth watching since it's involved in the metals space, which is the fastest-growing space within the 3D-printing realm. In fact, Stratasys just invested in a potential ExOne competitor, Desktop Metal. (Although there should only be partial overlap in their target applications and markets.) However, investors should not assume that profitability is a sure thing at some point in the future.

Investors should look at ExOne's results through a wider time lens than one quarter. Its quarterly revenue and other metrics will be very "lumpy" due to the small number of high-priced 3D printers it sells.