Big changes are afoot at the top of Buffalo Wild Wings.

Buffalo Wild Wings (BWLD) is about to lose its leader. The company announced that Sally Smith, its president and CEO, served notice that she will retire by the end of the year. Regardless, her employer said she will continue to serve in both capacities "until the end of the year or until such time as a successor has been named."

Buffalo Wild Wings said it has launched a search for a new CEO.

Shortly thereafter, the company elected a new slate of directors at its annual shareholders meeting. Candidates associated with Marcato Capital Management, the activist investor that has been agitating for changes, won three out of nine seats on the board. It should be noted, however, that one of the Marcato candidates was supported by Buffalo Wild Wings, and a fourth nominee was not elected. 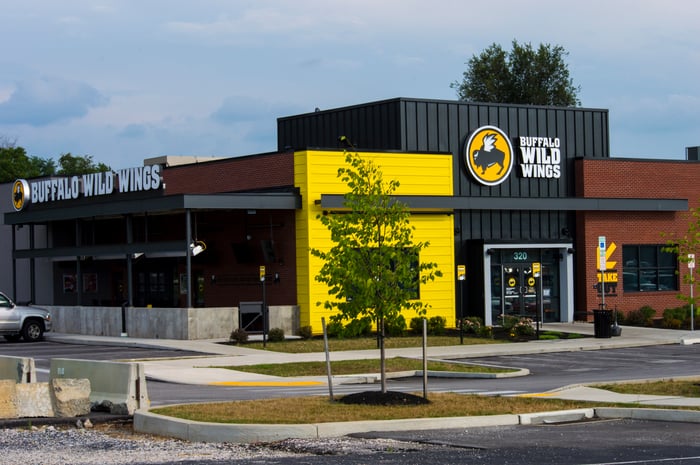 The retirement of Smith -- a change Marcato pushed for -- and the board ascensions are clear victories for the activist investor. In fact, one of the elected board members is Marcato founder and managing partner Mick McGuire. So it now has a much better chance of implementing its strategy for improving Buffalo Wild Wings' fortunes.

But is that strategy sound? A cornerstone of Marcato's ambitions is for the restaurant owner to franchise 90% of its locations, as opposed to the just under 50% at present. Marcato believes that a heavily franchised operation would make for a more efficient and profitable company.

I'm not particularly convinced. The restaurant-chain space these days is crowded and competitive; franchisees therefore are operating in something of a buyer's market, and it might be tough for Buffalo Wild Wings to command premium franchise sales and fees. A big shift like Marcato's plan could also lead to quality-control concerns with franchised restaurants, and the effort to maintain standards might prove resource- and capital-intensive.

So although this is a big win for Marcato, I'm unsure we could say the same for Buffalo Wild Wings' and its future. It might not be advantageous to be invested in this company just now.