Business Chat is a direct challenge to Facebook's Messenger for Business.

The Mac maker has added a new section to its developer site that details a feature called Business Chat that will make its way into iMessage. It's pretty much exactly what it sounds like: Apple hopes to connect businesses to customers directly within the core Messages app. Here's Apple's description: "Business Chat is a powerful new way for your customers to get answers to their questions, learn about and purchase your products, and engage with your existing support channels. Integrated into Messages and discoverable through Maps, Siri, Search, as well as your own app and website, Business Chat helps you build persistent, long-lasting relationships with your customers." 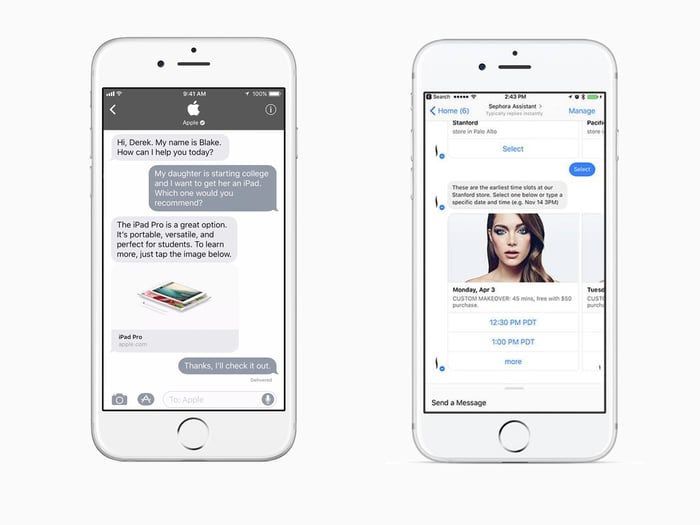 The social age of customer service

Modern mobile consumers have increasingly turned to social media channels to interact with businesses or ask for free chicken nuggets, a trend that largely started on Twitter. Apple officially launched its own Twitter support account, @AppleSupport, early last year, but many businesses had already hopped on the bandwagon. Firing off a few tweets when you're seeking support is a whole lot easier than calling in and navigating an annoying phone tree.

Facebook is a uniquely ideal platform for these types of interactions, in part because of its real-name policy that makes it easier for a business to know who it is interacting with. Anonymous Twitter trolls aren't worth paying attention to (in more ways than one).

Facilitating customer support is also a key reason why Facebook is pushing so hard with Messenger chatbots, since automation will be utterly critical to scaling. Conceptually, sending messages to businesses on a unified platform has a lot of appeal, far more than the outdated model of seeing pop-up chat prompts when you visit a company's website, or being directed to a bloated support forum to dig up answers on your own.

Apple will detail its Business Chat plans further later this week when it streams a WWDC live session on June 9, but it remains to be seen if the company will outline the economics. Will Apple attempt to charge businesses for implementing Business Chat? Or will it offer Business Chat as a free developer tool that any company can use to integrate directly into iMessage with no fee?

If Apple chooses the latter, since it has no need to monetize such an offering, we could be talking about really disrupting Facebook's burgeoning efforts to offer the exact same thing for a price.