While many in the restaurant industry deal with falling comps and increased competition, some players have found a way to keep their heads above water while continuing to expand their footprint. Dave & Buster's (NASDAQ:PLAY) is one such example.

The restaurant chain -- which focuses just as much on providing amusement options as it does food -- announced earnings this week that showed while it is not immune to such macro factors, it is indeed doing a solid job of driving business. 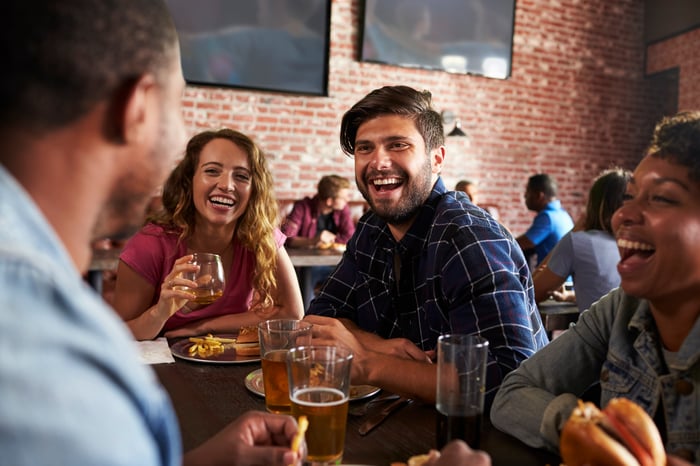 The results were in line with what management laid out for fiscal 2017 three months ago.

Obviously, there's been impressive leverage at play, with net income more than doubling sales growth. The two biggest contributors to this leverage were from payroll and amusement games. The amount of money the company spent on operating payroll and benefits was up just 6% versus the overall 16% jump in sales -- meaning each employee is bringing in more sales. The amusement and other category -- the games that kids and adults play while not eating -- showed impressive margin expansion of 206 basis points to 90.66%., with some of that benefit coming from a tax settlement.

Herein lies the beauty of the company's business model: Though games are constantly being refreshed, they are largely one-off purchases that -- once they pay for themselves -- let cash flow directly to the company's bottom line.

Of course, there's no number that investors watch closer than comps -- or the sales increase at existing stores over the past 12 months. Management told investors to expect 2% to 3% growth this year, and the 2.2% comp posted during the first quarter was well within that range.

Digging deeper, amusement comps were up an impressive 6.4%. As I said above, the importance of this cannot be overstated. While food brings customers is, it is the games that drive the chain's impressive financial results. In fact, the food and bar businesses were down 2.2% and 4.2%, respectively, during the quarter.

In other words, Dave & Buster's is no different than any other chain when it comes to the recent weak market. It's just that the addition of amusement to the company's bottom line is a game-changer.

On the last point, CEO Stephen King said, "We now expect to open 12 new stores for this fiscal year, which equates to unit growth of 30%...By the end of fiscal year 2017, we'll have 104 stores operating across 35 states in Puerto Rico, and that's just under half of our long-term goal."

Management also bumped up its estimates for fiscal 2017, which will end next February. While comps are still expected to come in between 2% and 3%, revenue and net income forecasts increased slightly.

The key moving forward will be the company's ability to balance opening up new stores to grab market share in new cities while not overextending itself. Thus far, that approach seems to have worked.