NVIDIA's latest deal with this mass-market automaker can help put it ahead of the curve in the self-driving car space.

As many as 44 companies are currently working on self-driving cars, according to CB Insights' venture capital database. But NVIDIA (NVDA 2.84%) seems to have made a distinct mark in this fledgling space.

The graphics-chip specialist already boasts an impressive number of partnerships with top automakers and component suppliers, including Audi, Tesla (NASDAQ: TSLA), Mercedes-Benz, and Bosch, among others. However, its latest partnership with automotive giant Toyota (TM 1.16%) has the potential to accelerate its automotive revenue like no other given the volume of automobiles it sells. 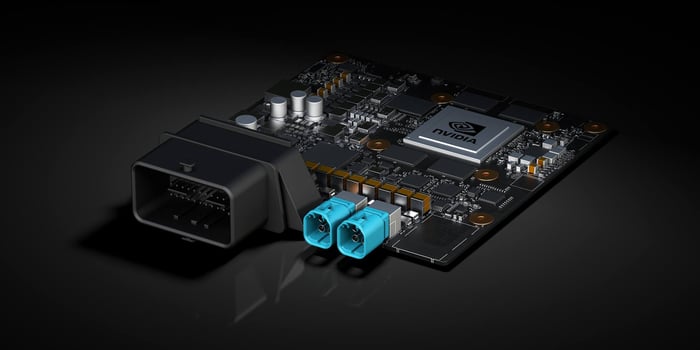 Why the Toyota deal could be a big one for NVIDIA

Tesla is NVIDIA's biggest automotive win so far. The electric-vehicle maker is currently using the chipmaker's DRIVE PX2 platform across its entire model lineup, including the entry-level Model 3 that could push its annual production to 500,000 units next year.

There's no doubt that the Model 3 will boost NVIDIA's automotive revenue once deliveries begin later this year, but it cannot be denied that Tesla's potential sales next year are still a fraction of the major automakers'.

Luxury carmakers such as Audi and Mercedes don't move too many units either, as their combined sales stood at just over 4.1 million cars last year. Meanwhile, Toyota was the second-largest automaker by sales last year, moving over 10 million units, which makes it a truly mass-market operator.

Toyota has decided to work with NVIDIA's DRIVE PX2 self-driving supercomputer platform, which will be powered by its next-generation Xavier chip. Though neither company went into the specifics of the deal, which was announced May 10, it is likely that the automaker is going to use NVIDIA's technology in its mass-market cars.

Toyota seems willing to integrate NVIDIA's DRIVE PX2 system in its vehicles rather than tap the chipmaker to develop and test a separate self-driving system from the scratch, as other car companies are doing. NVIDIA can simply supply its DRIVE PX2 supercomputer to Toyota's vehicles instead of building a new self-driving car around this platform, which has the potential to substantially boost the former's automotive business given the number of cars the Japanese giant sells.

In fact, the Japanese carmaker is already using self-driving tech in its existing vehicles, such as a collision detection system in the Corolla. Therefore, it can accelerate its technology development by using NVIDIA's self-driving supercomputer to integrate more self-driving features into its cars going forward.

Audi, meanwhile, is working with NVIDIA to bring a "proper" self-driving vehicle, which could drive itself with minimal human intervention, to the market in 2020. Similarly, NVIDIA also has a deal with the world's largest carmaker, Volkswagen AG, to develop artificial intelligence (AI)-enabled cockpits across its entire portfolio.

Taking a lead over the competition

NVIDIA's latest deal gives it an upper hand compared to other companies such as Samsung and Intel (NASDAQ: INTC) that are trying to make a mark in driverless-car systems. Both these chipmakers have tried to buy their way into the autonomous-car industry, with Intel recently moving to acquire Mobileye for $15 billion.

The chip giant's acquisition of the Israeli tech company gives it access to a wide range of technology that can be deployed in autonomous cars, such as high-definition mapping and camera-based sensor applications. What's more, Intel has also gained numerous automotive partnerships with the likes of BMW, Audi, and others, so it could be a strong challenger for NVIDIA.

For instance, BMW started collaborating earlier this year with Intel and Mobileye to test 40 driverless cars. However, Mobileye failed to convert its Tesla partnership into a long-term deal, leading to a win for NVIDIA. In the same way, the graphics specialist's Toyota deal looks like a win over the Intel-Mobileye combine.

NVIDIA's automotive business is gradually getting better as the company brings more partners on board to test its technology. Last quarter, the chipmaker saw a 23% year-over-year jump in its automotive revenue to $140 million. But investors can expect stronger growth, if Toyota deploys NVIDIA's solutions in mass-market vehicles.