One of these solid dividend-paying companies owns familiar retail brands -- the other one may be new to you.

If the home-goods industry has caught your eye, proceed carefully! Companies that provide home goods, such as furnishings, often see their performance tethered to consumers' spending power -- and that can be volatile.

The two best dividend stocks in this category are stable, large-capitalization corporations with growth potential and diversified revenue streams: TJX Companies Inc (TJX 0.16%) and Leggett & Platt, Inc (LEG -2.13%). Both offer the dividend investor a measure of safety, in addition to the potential for generous shareholder returns.

Working behind the scenes

Legget & Platt is a manufacturer of numerous components that find their way into home goods, including spring-mattress parts, carpet cushioning, motion mechanisms for chairs and sofas, and private-label finished seating. The company also sells industrial products, such as steel wire and tubing for the aerospace industry. Leggett & Platt estimates that its automotive components, which range from wire suspensions to adjustable lumbar-support units, are found in 85% of the cars manufactured in North America, Europe, and Asia.

The company is a member of the exclusive group of S&P 500 Index corporations known as "Dividend Aristocrats." These organizations have raised their annual dividends for at least 25 years or more. Leggett & Platt boasts one of the most impressive runs among Aristocrats, having bumped up its dividend for 46 consecutive years. The current quarterly dividend of $0.34 equates to an annualized yield of 2.6%.

An investment in Leggett & Platt provides some cushioning from the periodic consumer caution that hits other home-goods companies. Furnishings and consumer products make up 62% of Leggett & Platt's revenue, with the remainder of revenue devoted to industrial goods. This composition provides diversification to investors who worry about the home-goods industry's vulnerability to economic cycles.

The most attractive aspect of Legget & Platt, however, is its focus on delivering consistent shareholder value. The component supplier's management team is incentivized to hit performance targets largely through grants of stock, which means that C-level employees have skin in the game. 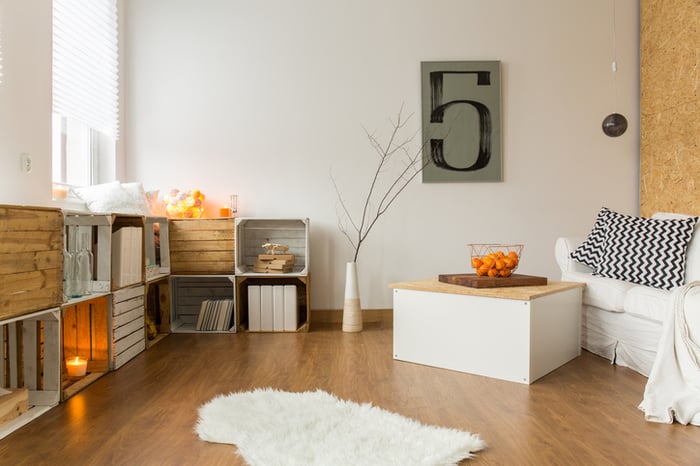 TJX Companies is best known for its "off-price" fashion retail stores, which include the Marshalls and T.J. Maxx chains. But home goods has prospered into an increasingly vital component of TJX's business: The aptly named HomeGoods stores in the U.S. comprise the company's fastest growing revenue stream.

This business segment, accounting for 14.4% of total revenue, expanded at a rate of nearly 11% in the first quarter of the company's fiscal 2018 year. In comparison, the "Marmaxx" segment (Marshalls and T.J. Maxx stores), which claims nearly two-thirds of total company revenue, grew just 2% in the same quarter.

TJX plans to build on this momentum by opening a new home-goods concept in the U.S. later this summer, named "HomeSense." Per management, HomeSense will carry differentiated merchandise not found in HomeGoods stores, but with a similar discount strategy.

Like Leggett & Platt, TJX Companies is a member of the S&P 500 Index. It's working on a dividend streak of its own, having recently issued its 21st consecutive annual dividend increase, and is likely to join the Dividend Aristocrat's club in four years.

This most recent increase of 20% raised the company's quarterly dividend to $0.3125, and pushed its annualized yield to nearly 1.7%. An attractive feature of TJX's dividend is its payout ratio of just 29.5%.

In comparison, Leggett & Platt's payout ratio weighs in at 52%. That's still considered a quite efficient ratio. However, TJX's comparatively lower payout per dollar of earnings implies that its dividend may have comparatively more room to expand in the future.

TJX generates attractive free cash flow, and as of late, management has been using excess cash to repurchase company shares. In the company's most recent quarter, TJX bought back $350 million of its own stock, more than double the $169 million paid to shareholders in the form of dividends. Together, these spends show evidence of a management team that, like the management of Leggett & Platt, is focused on building shareholder value and distributing returns in kind.

Start with these two foundational positions, and then branch out

Over time, investment in the home-goods industry can add an attractive mix of dividend income and share-price appreciation to your portfolio. Add Leggett & Platt and TJX Companies to your account as core holdings for their growth potential, dividend track records, and stability. You can then proceed to furnish your holdings with more aggressive home-goods ideas as opportunities arise.

Is This Under-the-Radar Dividend Stock a Buy?