The equipment company's deal for Europe-based Wirtgen Group is being touted as a highly synergistic buy.

For its latest big-ticket acquisition, Deere & Co. (DE -0.12%) has elected to go international. The company announced last week that it had struck a deal to buy German road construction equipment maker Wirtgen Group.

The acquisition won't come cheap. Deere agreed to pay a cool 4.36 billion euros ($5.2 billion) in cash for the company. That's a lot of scratch. Here's why Deere is willing to pony up so much for a new asset.

Although Deere doesn't break out numbers specifically for its road construction activities -- or the broader construction segment -- it's a crucial area for the company. After all, the wider category it's part of -- construction and forestry -- was responsible for nearly one-fifth of the nearly $8.3 billion in revenue it booked in its recently reported Q2.

The company touts the synergistic effects of the Wirtgen Group buy. In the press release heralding the deal, Max Guinn, Deere's president of construction and forestry said that it "enhances our global distribution options in construction equipment and enhances our capabilities in emerging markets."

Guinn also pointed out that global spending on infrastructure projects has outpaced that of the general construction sector and isn't as cyclical.

What helps greatly is that Wirtgen Group's products effectively fill out the road construction offerings of its American parent-to-be. Deere illustrated this point in the following graphic, showing its current product categories in the segment (in yellow numbers) matched with those of Wirtgen Group. 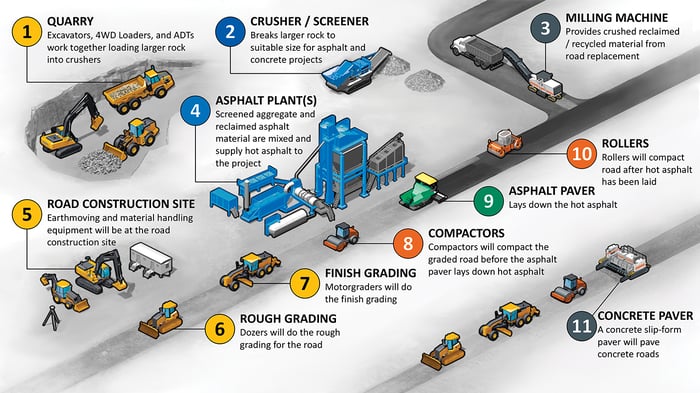 Owning its German peer will also add some meat to the top line. Deere said that Wirtgen Group's 2016 sales totaled 2.6 billion euros ($2.9 billion). Although Deere runs a massive operation that brought in $27 billion in trailing-12-month revenue, its new asset's take will represent more than a bump in that number.

Deere's been doing well lately, with revenue advancing by 5% on a year-over-year basis, and per-share net profit ballooning by 60% in Q2. Although the construction and forestry segment's sales rose by 7%, it's a thin-margin business at the moment: Its operating profit margin was 7%, notably under the 11% in Deere's core agriculture and turf segment.

So in addition to the revenue bump it'll provide, Wirtgen Group should also help Deere improve that margin figure. As the two companies' road construction product lines are very complementary, there is obvious scope to eliminate redundancies to cut costs.

Meanwhile, Wirtgen Group has a much better geographical range than the still very U.S.-focused Deere. That should nicely pad and broaden the new owner's client list, even if the American dollar is a bit strong at the moment. It should also fuel the segment's growth, in spite of growing doubts that the current presidential administration's plans to spend $1 trillion on infrastructure will be realized.

In short, I believe this is an opportunistic buy, made at the right time by a company on the upswing. In spite of the expense -- the purchase price well exceeds the company's cash position -- Deere shareholders should very much consider it a positive development, and another reason for holding on to the company's stock.

Deere believes Wirtgen Group will be accretive to per-share earnings, although it didn't provide a specific number. The deal will be financed by a combination of cash on hand and (necessarily) debt. It's been approved by Deere's board and is expected to close in the first quarter of the company's fiscal 2018.

You Can Boost Your Passive Income With These 3 Dividend Raises

Is Deere an Excellent Defensive Stock to Buy Right Now?

Here's Why Deere Is a No-Brainer Machinery Stock
413%