The struggling fashion house needs a CEO who does more than tread water.

Shares of Michael Kors (CPRI 0.75%) recently plunged after the fashion house followed up a fourth-quarter earnings beat with dismal guidance for the first quarter. In a recent article discussing that miss, I told investors that it might be a good idea to sell Kors, due to its waning market presence and brand appeal.

Much of that blame falls on John Idol, who has served as CEO of Kors since 2003. Let's examine six of his biggest failures since the company's IPO in 2011, and whether or not a new leader can get this company back on track.

Kors spent over 100% of its free cash flow on stock buybacks over the past 12 months. This means that it partly funded the buybacks with debt -- which wasn't wise considering that the stock plunged 30% during that period.

Instead of halting those buybacks, Idol authorized another $1 billion buyback plan on May 25. That's very disappointing, because the company could have allocated that cash to a dividend, new design and marketing initiatives, or acquiring other companies.

One potential acquisition was Kate Spade (KATE), which Coach (TPR 0.87%) recently agreed to buy for $2.4 billion. Kors was also reportedly interested in buying Kate, which would have helped it generate more annual revenue than Coach, but the management clearly couldn't pull the trigger. As a result, a beefed up Coach and Kate Spade will soon likely use their combined scale and marketing budgets to marginalize Kors.

Under Idol, Kors expanded its brick-and-mortar presence too quickly, opened too many outlet locations, and added too many department stores to its wholesale channel. When Kors went public in late 2011, it had just 203 stores worldwide. At the end of last quarter, it had 827 retail stores. That rapid expansion bolstered its top line growth, but undermined its appeal as a luxury brand.

That's why Kors recently announced the closure of up to 125 locations over the two years. But much of the damage was already done, and the company is now struggling to win back shoppers in the Americas and Europe.

Another ongoing problem for Kors is its wholesale channel, which sells its products to department stores and specialty retailers. Kors has little control over how these products are priced or displayed, so its bags are often marked down and tossed into unappealing piles -- which further erodes its brand appeal.

This problem has become so rampant that Coach started pulling its merchandise from 25% of all department stores last year. Kors made similar reductions last year, and excluded itself from department store coupons and friends and family discounts. 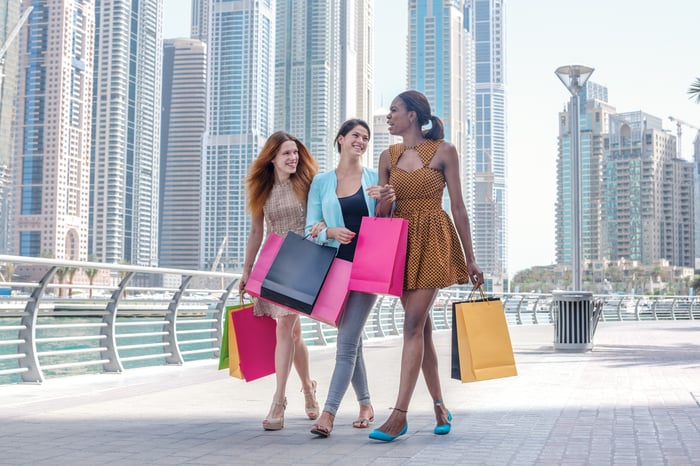 Meanwhile, Gucci and Versace's share of the 18-24 group posted double-digit gains -- indicating that Kors' aforementioned missteps have tarnished its "luxury" reputation among younger shoppers. Moreover, if Kors had spent the money it used on buybacks to hire new designers or create new looks, it might have retained the interest of younger shoppers.

If Kors' insiders were confident in Idol's leadership, they should be buying the stock instead of selling it. Yet company insiders sold 338,427 shares on the open market (worth $11.6 million at today's prices) without buying a single share.

This doesn't inspire much confidence, considering that the stock currently trades at just 10 times earnings -- which is well below the industry average of 24 for apparel manufacturers.

At this point, we've seen what Idol is all about: big debt-funded buybacks, a timid approach to acquisitions, and an overly aggressive expansion plan that backfired and cheapened the brand.

What Kors needs today is a leader who will halt those buybacks, pay out dividends, acquire smaller fashion houses, or hire new designers to rejuvenate the fading brand. All these moves would likely be better than Idol's current strategy of treading water.