The streaming-video giant's business model is deceptively simple. Here's what you need to know.

Digital-video veteran Netflix (NFLX -1.12%) collected $8.83 billion of top-line revenue in fiscal 2016. About $187 million of those sales dropped all the way down to the bottom line in the form of net income.

You might wonder how Netflix can pull in billions of dollars in quarterly and annual sales. It's pretty simple, so let me break it down for you.

The domestic subscriber list grew 10% longer last year, but sales increased by 21% thanks to higher average subscription prices. The same holds true overseas, where the subscriber growth stopped at 48% but revenue jumped 64% higher. Average DVD plan payments held steady, so the 16% lower subscriber count was matched by a 15% revenue reduction.

These numbers tell a simple tale of changing priorities. Just five years ago, Netflix culled 31% of its total 2012 sales from the DVD service that had been separated from streaming in the summer of 2011. Less than 1% came from international streaming, which was limited to services in Canada, the U.K., and Scandinavia at the end of 2012.

Today, DVD revenue stands at roughly 6% of Netflix's overall sales and continues to shrink. Meanwhile, international streaming has climbed to 36% of Netflix's annual revenue and should pass the domestic streaming segment's financial muscle by the end of 2017. The future of Netflix's growth belongs to customers in Europe, Asia, South America, and Africa. 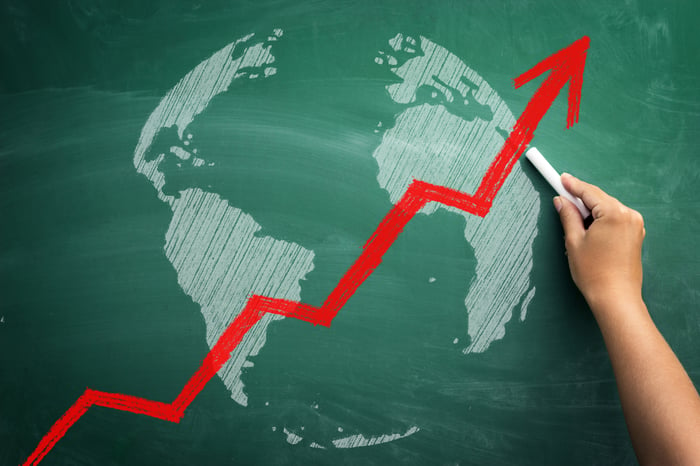 The international streaming segment is still unprofitable in 2017, but that should change in short order. Netflix continues to invest large sums into producing original content at home and overseas, but content costs as a whole are growing slower than top-line revenue, and the budget increases for technology and equipment have started slowing down as well.

As a result, operating income nearly tripled year over year in the fourth quarter of 2016 and increased more than fivefold in the first quarter of 2017. That trend should continue in 2017 and beyond, eventually lifting international streaming services out of the red to generate solid and predictable operating profit. Management expects to hit a 7% overall operating margin in fiscal year 2017 and grow at a modest rate from there. For your reference, operating margin stopped at 4% in 2016 and 2% in 2015.

So Netflix has just started its global growth story -- on both the top and bottom lines.