The global server market isn't the most flashy part of the technology industry, but it is one of the most important sectors in all of tech. Whether physical or cloud-based, servers are the backbone of modern computing. Without them, our tech-laden world could not exist.

That's why the companies that make servers can be steady, reliable investments. International Business Machines (IBM 1.84%), Hewlett-Packard Enterprise (HPE 2.27%), and Intel (INTC 3.01%) are three prominent names to consider in this space. Let's take a closer look at them.

The shift from physical servers to cloud-computing products is one of the biggest trends in the server market today. It's also the reality for IT giant IBM.

IBM saw its server sales decline 22% from $7.5 billion in 2015 to $5.9 billion in 2016. The company is in the third year of the sales cycle for its z13 mainframe server, and it emphasized that it continued to add server clients in 2016. However, in fiscal 2016 alone, cloud service revenue rose 49%, from roughly $3.9 billion to $5.9 billion, more than compensating for the revenue decline in physical servers.

Of course, selling cloud services involves increasing the number of its own servers in use. It's just that the physical servers are separated from the cloud-computing software, which changes the sales model but not the computing product being delivered. So IBM's revenue model will always be connected to the server market, even as the way it sells its computing power changes along with the rest of the industry in the years to come. 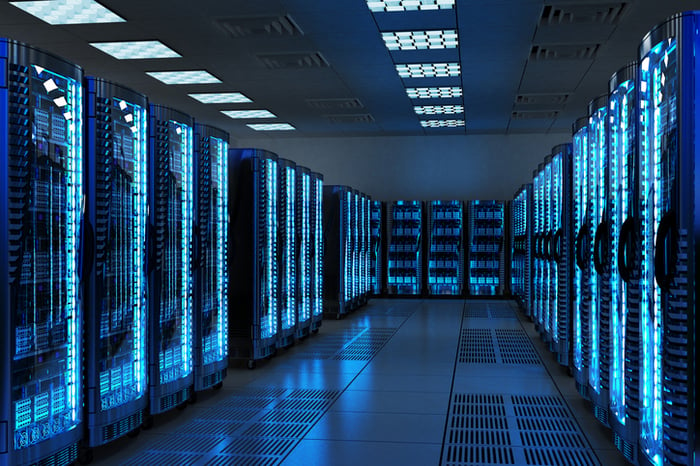 Servers are the largest revenue driver for Hewlett-Packard Enterprise, the largest server producer by market share. Their sales accounted for $14 billion  of its $50.1 billion in total 2016 sales.

Hewlett-Packard Enterprise has so far weathered the changes in the server industry better than expected, as server sales for the IT giant fell just 0.7% in fiscal 2016. However, some of the long-term trends affecting the sector may be catching up with it, as server sales declined 14% year over year, from $3.5 billion to $2.9 billion, in  the most recent quarterly report.

The bigger problem is that the company lacks a dedicated cloud suite of products like IBM does. IBM can hope to hold on to many of its customer relationships by transitioning their solutions from physical servers to cloud computing as a service. Whether Hewlett-Packard Enterprise can figure out a similar solution will be the thing for investors to watch in the coming years.

The world's largest chipmaker rules over the server market; estimates of its share of server market microprocessors hover around 99%. So the company stands a great chance of continuing to print profits from the computing infrastructure space, even as the way computing is delivered changes.

That's great news, because Intel's data-center group, which represents the company's server sales, produced a 43% operating margin in fiscal 2016. This segment has, however, seen its operating margin decline from as high as 50% in 2014, a drop that Intel seems to pin on increased operating expenses.

If that's so, it implies that the company hasn't lost its top-line pricing power. That seems like a possibility, as leading cloud companies such as Amazon.com, Alphabet, and others could seek volume discounts for their server chips. Investors will want to keep an eye on this trend, but there's little doubt that Intel is one the most indispensable companies in the server market today.