The internet retail space traditionally is not the first place income investors look on their hunt for winning dividend stocks. Historically, names like Amazon.com or Alibaba have garnered headlines for their high growth rates and disruptive business models, and this won't change any time soon.

However, there's one company in the space that pays the most minute of dividends, which technically satisfies this article's main constraint. As you will see below, Latin American e-commerce titan Mercadolibre (MELI -3.21%) is an incredible all-around stock that all investors -- including those seeking dividends -- should absolutely have on their radars.

For those who have never heard of it, Mercadolibre is the leading e-commerce company in Latin America. Think of it as Amazon meets eBay meets Latin America, and you'll have a general gist of the company's core function. Founded in 1999 by current-day CEO Marcos Galperin, the company applied to Latin America the blueprint that Amazon and eBay were implementing in the U.S. to such great effect, and it hasn't looked back since.

Today, it operates the largest e-commerce website in Latin American countries including Argentina, Brazil, Chile, Colombia, Costa Rica, Ecuador, Mexico, Peru, Uruguay, and Venezuela. It also maintains a presence in eight additional countries within the region (plus Portugal). With an estimated online population of roughly 350 million and growing -- out of a total regional population roughly 610 million strong -- it should come as no surprise that Mercadolibre's financial performance has simply exploded since its 2007 IPO. 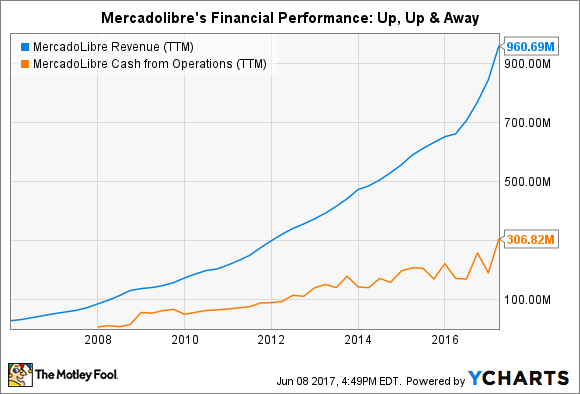 The company has continued to innovate, in hopes of capturing as much of this growing market as possible. In addition to its core marketplace, Mercadolibre has also introduced MercadoPago, an online payments service akin to PayPal in the U.S. It also launched an advertising platform within its marketplace, a dedicated online store solution for large sellers, and a shipping and fulfillment service. Combined, these moves should help bolster Mercadolibre's platform status and cement its place as the go-to provider of all things e-commerce within Latin America.

It also pays a dividend. 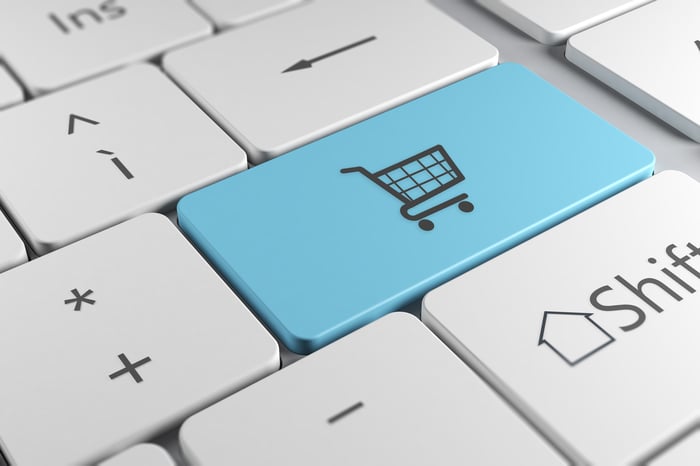 Mercadolibre: Much more than a dividend stock

Let's just get this out of the way: Mercadolibre isn't the best dividend stock in technology. However, the company's combined income and growth narratives still make this longtime Fool favorite an incredible company to own today.

In terms of Mercadolibre's dividend, the company's shares currently yield just 0.2%. For context, the current yield on the S&P 500 stands at 1.9%, and the 10-Year Treasury pays 2.2%. Mercadolibre is also relatively new to paying its dividend, starting its cash distributions in 2011.

Most substantively, investors shouldn't look to Mercadolibre for its near-term income-producing potential. Rather, Mercadolibre's dividend should be thought of as icing on the cake rather than the entire meal. Thankfully, the company's long-term growth outlook remains extremely bright, as you can see below. 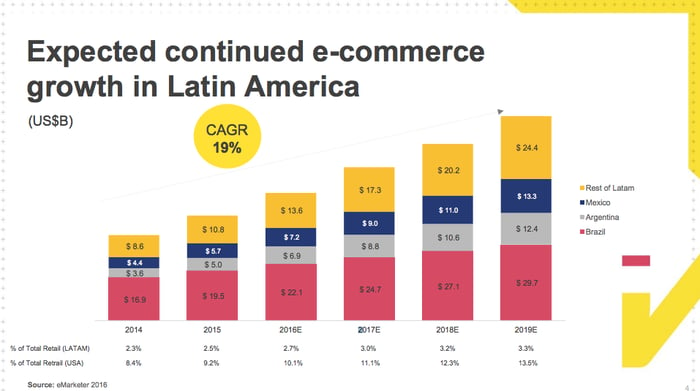 Perhaps more encouragingly, the overall adoption of e-commerce in Latin America suggests that the category, as a whole, still enjoys ample room for growth. For example, research firm eMarketer estimated that total Latin American retail sales topped $1.8 trillion in 2015, the latest year for which I could find data. The same eMarketer research suggested that total regional e-commerce sales accounted for just 2.6% of total retail transactions in 2016, far below the 8.2% level in the U.S in 2016.

Last year, Mercadolibre generated $844 million in sales, an impressive record for the company. However, the company still accounts for less than 10% of its region's total e-commerce sales, which is just a drop in the bucket within the region's overall retail ecosystem.

It's hard not to get excited about what the future holds for Mercadolibre over the long term when looked at this way. Like Amazon in the U.S., the company has shrewdly developed a full-scale suite of tools, like payments and fulfillment, that give it competitive advantages over the competition.

It surely isn't the most exciting dividend stock out there today. However, few companies anywhere in technology can match Mercadolibre's potent combination of income and growth potential, and that's precisely why it deserves investors' attention.