Please ensure Javascript is enabled for purposes of website accessibility
Free Article Join Over 1 Million Premium Members And Get More In-Depth Stock Guidance and Research
By Daniel B. Kline - Jun 16, 2017 at 9:19AM

There's money to be made, but it involves changing how they operate.

Lost in the many stories about the death or slow, painful collapse of so many well-known retailers is that American consumers are still buying stuff.

In fact, when you look at a chart of United States retail sales the numbers have been moving steadily higher since about 2009. What's changing isn't whether people spend money, it's how they spend it.

Of course the driving force for that has been the internet. Consumers buy more online, and have become comfortable purchasing things digitally -- like shoes -- that seemed unlikely to move into that realm just a few years ago.

The changes on how people buy have only just begun. In fact the introduction of Accenture's ( ACN -1.06% ) Painting the Digital Future of Retail and Consumer Goods Companies report contends that those industries will change more in the next 10 years than they have over the past 40. In the study, based on analysis from the World Economic Forum, Accenture contends that "a digital wave is underway that could bring a cumulative $2.95 trillion in operating profits by 2025 for the retail industry."

That's quite a bit of money, getting a piece of the pie involves making major changes in how a retailer operates. It's no longer just about having a website and competing with Amazon ( AMZN -1.38% ). It's about adapting to the different ways in which the American consumer has become willing to buy goods and service. 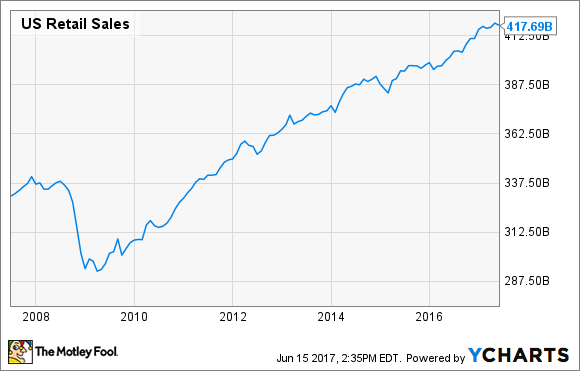 How does a retailer get a slice of the $3 trillion pie?

The Accenture report lays out four distinct areas that are going to keep growing. All of them exist now and their growth has only just begun.

The numbers back up the changes the report sees coming. More than one third of U.S. consumers (37%) said they would use a rental subscription for clothing, renting an item for an occasion and returning it after, instead of purchasing it outright.

There is huge opportunity

Amazon already has staked out a major place in both the replenishment economy and the service economy (at least in some markets). That does not mean that other retailers -- both pure-digital and brick-and-mortar -- don't still have time to get in on the action.

This is a major shift in how people shop. It almost certainly means less visits to stores but that does not have to mean the end of physical retail. Instead, traditional retailers need to use their stores as hubs to initiate, explain, and sell the types of experiences detailed above.

Retail is shifting, but it's not going away. Opportunity remains for the companies willing to accept that how people buy has changed and it's going to change even more.

Amazon does have a clear lead in addressing the market, but chains like Best Buy, which has embraced service and is trying out a rental program, have shown that it's possible to adapt to this new economy. Others will either follow and grab a piece of the nearly $3 trillion pie or they will continue to shrink and disappear.