All 30 Dow components pay dividends, and here are the top 10.

The Dow Jones Industrial Average is made up of 30 of the most established and mature U.S. companies, so it shouldn't come as a surprise that many of the index components pay strong dividends. In fact, all 30 Dow components pay dividends, with annual yields ranging from 0.70% to 4.94%.

Here are the 10 highest-paying Dow Jones Industrial Average stocks, and a look at which ones are worth an investor's consideration now.

Data Source: TD Ameritrade. Prices and dividend yields as of 6/10/17.

To be clear, I wouldn't call any of these stocks, or any other Dow stocks, bad long-term investments. And it's also important to point out that a high dividend all by itself doesn't make a stock a good investment choice. In fact, Apple and Goldman Sachs are two of the lowest-paying Dow stocks, but I consider them to be among the best buys in the index.

Having said that, if you're looking for high-dividend stocks, here are three Dow components that may be worth a look right now.

Telecom giant Verizon (VZ 0.92%) is perhaps my single favorite stock for investors whose top priority is income. It pays nearly 5% per year, and its dividend is backed by reliable cash flow generated from its subscribers. In fact, Verizon's dividend represents about 62% of 2017's expected earnings of $3.75 per share, so the company could even absorb a significant earnings drop and still maintain its dividend payment. 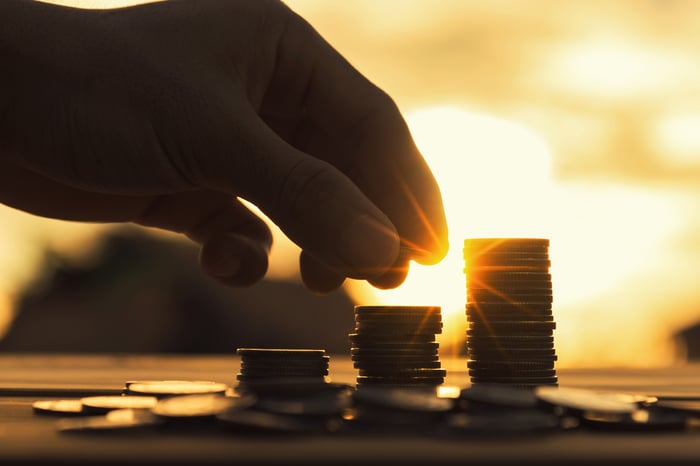 The stock also has a history of low volatility, so it can produce a bond-like income stream, while still allowing you to sleep soundly at night. In addition, the stock trades for just 12.4 times 2017 earnings, far below the S&P 500's average forward earnings multiple of approximately 19.

Tech giant International Business Machines (IBM -0.04%), better known as IBM, hasn't exactly performed well lately. "Big Blue" has fallen out of favor with investors, and its share price has fallen by 16% in the past three months alone, fueled by weaker-than-expected earnings in April and a downgrade of its credit rating in May. Warren Buffett's decision to sell 30% of Berkshire Hathaway's stake in the company didn't help, either.

However, picking up shares of IBM now while the price is low could be a smart idea. IBM's cloud-related business is thriving and has room to grow. In fact, IBM's software-as-a-service (SaaS) sales grew 59% over the past year, and its high-growth "strategic imperatives" businesses now account for 42% of revenue and are growing at a double-digit rate. Plus, at just 11 times forward earnings and a nearly 4% yield that's covered more than twice over by the company's earnings, this could turn out to be an excellent value play for patient investors.

ExxonMobil (XOM -1.83%) is one of the largest oil companies in the world, and is among the top dividend payers, as well. Not only is ExxonMobil's dividend one of the highest in the Dow, but the company has a 34-year track record of dividend increases, no matter what the economy or the price of oil was doing. To be clear, I'm a fan of both oil stocks on the list (Chevron being the other), but I think ExxonMobil's size gives it a bit of an advantage.

Perhaps my favorite thing about Exxon is its diverse business, which includes oil drilling, chemicals, and refining, just to name a few. Some of these obviously do better when oil prices are high, such as the company's drilling operations. However, when oil prices fall, refining profits actually increase. In other words, ExxonMobil is set up to make money no matter what oil prices do.

In addition, the company has a rock-solid balance sheet and has historically been more effective at generating returns on capital than peers, as my colleague Reuben Gregg Brewer pointed out in a recent article. Finally, while renewable energy is definitely surging in popularity, oil demand is still expected to grow going forward. So don't worry about oil "going away" -- it isn't happening anytime soon.

3 Stocks to Buy with Dividends Yielding More than 4%
405%