The sportswear brand should be using its star to create a luxury product, but is instead turning it into a commodity.

Steph Curry may be the most highly regarded player in NBA after leading his Warriors to the title for two of the last three years, but you wouldn't know it from his shoe deal.

The sharp-shooting guard is Under Armour's (UA 2.49%) (UAA 2.95%) highest-profile sponsor, but he was only No. 6 on Forbes' list of most lucrative shoe contracts.

Curry earned $12 million from his Under Armour deal last year, which includes bonuses and royalties, but that was a pittance compared to Jordan's $110 million and significantly less than what James ($32 million) or his teammate Durant ($25 million) earned from the Swoosh. 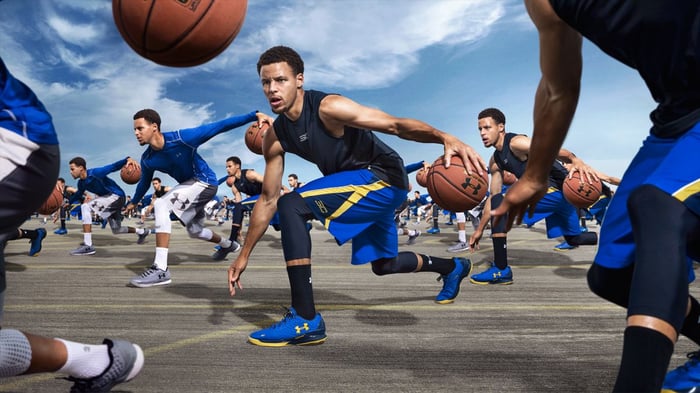 Under Armour nabbed Curry from Nike a few years ago in a major coup, but the upstart sportswear company has been unable to unleash the full power of Curry, who's arguably the league's most electric player since Jordan.

Meanwhile, Under Armour stock has imploded over the last year as footwear sales growth has ground to a halt. The company also admitted that Curry's latest sneaker, the Curry 3, was a disappointment as the company failed to sell through its inventory, leading to discounting at retailers. On Under Armour's website, the sneaker is marked down from $139.99 to $99.99.

But the company's inability to generate sufficient demand for the Curry 3's is a sign of its own failed strategy in how it marketed the basketball star. Instead of using him to promote a luxury product, the company misread demand and is now stuck with something more like a commodity.

A shot at greatness

The success of Nike's Jordan brand is the result one of the most brilliant marketing strategies of the past generation. Through a combination of advertising, scarcity, pricing, and design, the Jordan brand has grown to generate $3 billion in annual revenue for Nike, and has made its namesake a billionaire.

Thanks to Jordan's status as an icon and a policy of artificial scarcity, Jordans, as the sneakers are known, have been one of the most coveted items on urban streets for the past generation, and are arguably the defining status symbol of the inner city.

The sneakers have even generated a healthy secondary market as resellers often wait overnight outside stores before release days for new Air Jordans, which can fetch a hefty premium because of the limited run. The sneaker resale market is now estimated to be worth $1 billion a year, and Jordans are its biggest component.

More recently, there are signs that the Jordan brand's dominance may be slipping as tastes have moved to classic Adidas shoes and supply has increased for more recent Jordan models, but the brand's historical supremacy is undeniable.

Building an iconic product isn't easy, of course, and a high price alone isn't enough to generate a halo effect. College star Lonzo Ball's Big Baller Brand shoes' $495 price tag inspired mockery when they were released, for example, but demand is more important than profits for Under Armour. Taking a star like Curry and building a buzzworthy line of shoes around him is the challenge ahead for the company. CEO Kevin Plank sees UA as a luxury brand, but it has been unable to make the transition from a functional brand to a fashionable one. Curry represents its best opportunity to achieve that.

At age 29, the "babyfaced assassin" still has several more years in the prime of his career. Under Armour needs to give him the marketing muscle he deserves or risk losing its best opportunity to break through in the footwear market and assert itself as a luxury brand.