Are Amgen, Illumina, and Sarepta Therapeutics really the most overvalued biotech stocks on the market?

Biotech stocks aren't exactly known for being cheap. While there are some bargains to be found, most biotech stocks trade for more than their financial results justify. And a few biotech stocks fall into the wildly overvalued category.

The most overpriced biotech stocks based on their PEG ratios, which factor in expected growth targets from Wall Street analysts, are Amgen (AMGN 0.32%), Illumina (ILMN 1.95%), and Sarepta Therapeutics (SRPT 3.40%). But are these biotech stocks really as wildly overvalued as they appear? 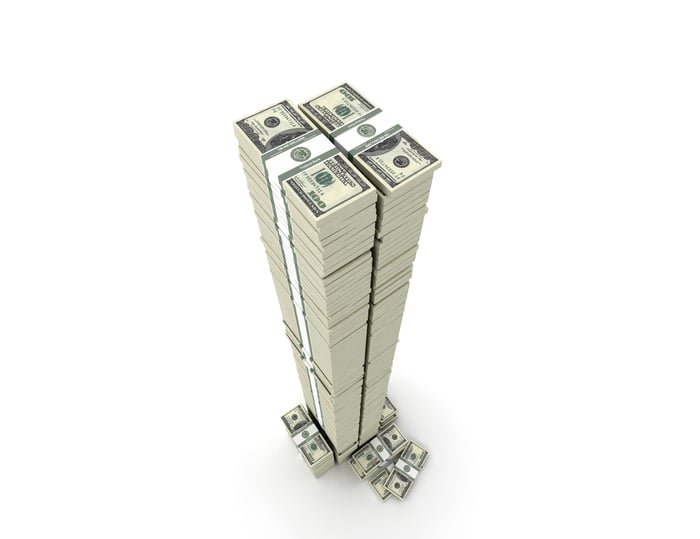 Amgen ranks as one of the biggest biotechs around, with a market cap of roughly $120 billion. Its stock price has more than doubled over the last five years, thanks to solid earnings growth. Wall Street analysts, though, think Amgen's growth is about to taper off dramatically. As a result, the stock's PEG stands at 3.15. That certainly makes Amgen stock seem overpriced.

The projected drop in earnings growth doesn't appear to be overly pessimistic as things stand right now. In the first quarter, sales for two out of Amgen's three top drugs fell compared to the prior-year period. The one exception, bone marrow stimulant Neulasta, grew sales by only 2% year over year.

Amgen needs some help for its current product lineup. The biotech does have a couple of approved drugs that could be winners, cholesterol drug Repatha and blood cancer drug Blincyto. Amgen also has a couple of potential blockbusters in its pipeline. However, it's too early to know if any of these drugs will live up to their potential.

So is Amgen wildly overvalued? If you only look at the PEG ratio, the answer is yes. The problem, though, is that doesn't account for Amgen's huge cash stockpile and strong cash flow. The biotech has plenty of money to make acquisitions that could improve its growth prospects. Amgen stock is expensive, but I wouldn't hate on this stock too much.

Illumina stock has soared nearly 340% over the last five years. As a result, the genomic-sequencing company's market cap now stands at $25 billion. This tremendous run has also pushed Illumina's PEG to the high level of 3.36.

Analysts project average annual earnings growth of 14% for Illumina over the next five years. That's not bad, but it's lower than the more than 20% annual growth experienced by the company in recent years.

This year could be somewhat problematic for Illumina. Although the company reported a solid first quarter, the transition to its new NovaSeq sequencing system could be disruptive in the next few quarters as customers slow down purchases of consumables while they wait to get the new system.

I'll be the first to admit that Illumina has a stratospheric valuation compared to most stocks. However, the valuation has actually been a lot higher in the past than it is now. I also think that Illumina's growth prospects could be better than expected with the roll-out of NovaSeq and the precision medicine initiative in China.

Sarepta Therapeutics stock has been the biggest winner of the three, gaining over 650% in the last five years. However, it was a wild ride for investors with huge swings along the way. Sarepta's PEG ratio of nearly 170 is also pretty wild.

Why is Sarepta's PEG so high? It's mainly because the biotech is only in the early stages of marketing its Duchenne muscular dystrophy (DMD) drug Exondys 51. The drug won FDA approval in September 2016. So far, the company hasn't made a lot of revenue from Exondys 51.

Whether or not Sarepta stock is way overpriced or not depends heavily on what payers do regarding Exondys 51. The FDA approval decision was very controversial, with one FDA scientist calling the drug "a scientifically elegant placebo." Some payers have refused to pay the steep price tag for Exondys 51 because its efficacy hasn't been proven clinically.

If payers ultimately decide to cover the drug, Exondys 51 could eventually generate sales of $1 billion or even more. In that scenario, Sarepta's market cap of roughly $1.8 billion isn't too high at all. If payers don't cover the drug, however, Sarepta Therapeutics just might be the most wildly overvalued stock in biotech.

Why Sarepta Therapeutics Stock Is Perking Up Today
395%