The much-followed investor is far from perfect this year. Find out what's holding Soros back.

Billionaire investor George Soros has a reputation for making smart moves with his money. He has a long track record of successful investments, but even Soros gets some things wrong. In particular, some of Soros' bets in the energy sector have let him down so far in 2017, and some other value-based bets have yet to pay off for the billionaire as we near the halfway point for the year. Below, we'll take a closer look at Soros energy holdings California Resources (CRC) and Key Energy Services (KEG -60.00%), as well as ServiceSource International (SREV) and Eastman Kodak (KODK -0.29%), to see how they've hurt the investor's overall performance so far this year. 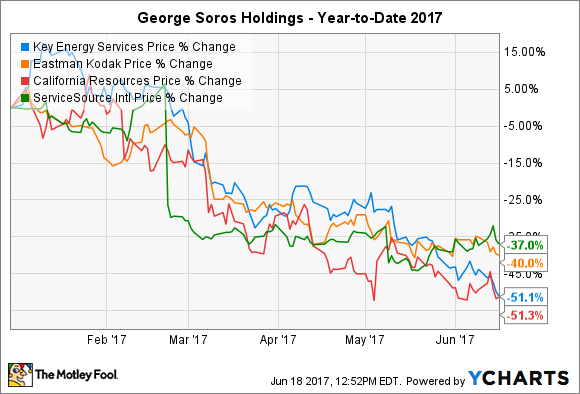 Overall, Soros doesn't have a huge allocation to the energy sector, with his holdings in the industry amounting to less than 6% as of the end of the first quarter. That has served him well, because the energy sector has had a tough first six months of 2017. After having recovered substantially in 2016 from the big plunge in crude oil that took prices from triple digits all the way down below $30 per barrel, energy prices have stalled out this year, and recent declines have put many energy companies under pressure.

Soros' 2 million share position in California Resources made up just 0.6% of his portfolio at the end of the first quarter, and his nearly 1.25 million shares of Key Energy Group was only the tiniest bit lower in value. However, they're among the worst performers in Soros' portfolio, with losses of more than 50% so far in 2017.

For California Resources, recent declines have stemmed from the latest drop in oil prices, following reports of unexpected supply gluts that have thrown the market into turmoil. Meanwhile, for Key Energy, falling prices could spell trouble for its production enhancement and late-stage well servicing businesses, because producers might choose to cut back on their efforts and thereby reduce their use of Key's services. 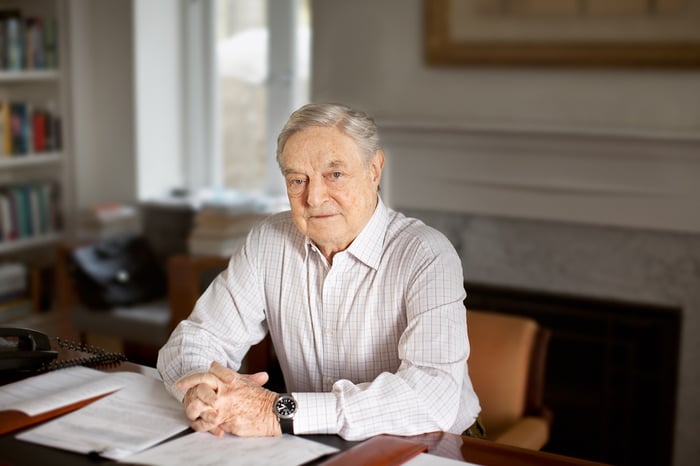 The business of helping corporate clients take maximum advantage of their customer bases has gotten bigger recently, and ServiceSource aims to offer technology-enabled solutions and best-practice processes to help its corporate clients serve their customers more effectively. However, ServiceSource has run into trouble this year, with revenue growth slowing to just 6% and producing minimal profit on an adjusted basis. Concerns about the sustainability of long-term sales growth also weighed on the stock. That has helped lead to a 37% drop in price so far in 2017.

For Soros, the impact of the move hasn't been quite as bad, because most of his position is held in a convertible note with a value of more than $100 million. Soros' common stock holdings amount to less than 1 million shares worth less than $4 million, or about 0.08% of the overall portfolio. However, Soros has been building up his stake in the company, so he's hoping that the business will turn around.

Kodak: Not a pretty picture

Finally, Eastman Kodak hasn't been a good contributor to Soros' performance. The stock has dropped 40%, largely because of poor performance when it reported its full-year 2016 financial results. Even though Kodak managed to eke out a profit, revenue fell by double-digit percentages, and the company predicted another top-line decline in 2017. Kodak's future depends on its digital printing plates and services for commercial customers, but rising competition in that area could prevent it from establishing a durable competitive advantage.

Soros doesn't have high confidence in Kodak, as his roughly 24,000-share position amounts to just $277,000 in value, or 0.01% of his overall portfolio. Nevertheless, Soros isn't likely to hold on to even that small position unless the company starts delivering better results soon.

George Soros is known for his investing prowess, but no one gets every pick right. These four stocks show how even the best investors can suffer poor results from time to time.