Video game stocks have been flying high over the last year, and Take-Two Interactive (TTWO 7.85%) has been one of the industry's best performers, with its share price roughly doubling over the last year and currently sitting at new heights. Take a look at some of the key figures from the company's most recent quarterly report for some context on the publisher's post-earnings gains:

As shown above, Take-Two is posting fantastic sales and maintaining earnings momentum. These gains are even more impressive in light of the fact that it's been roughly two years since the release of Grand Theft Auto V -- the company's hugely popular entry in its most valuable franchise.

Since growth in high-margin digital sales has been at the heart of the company's improving top- and bottom-line results, it's worth taking a look at some pertinent quotes from Take-Two's May 23 earnings call as the market tries to map out what might come next for the company. 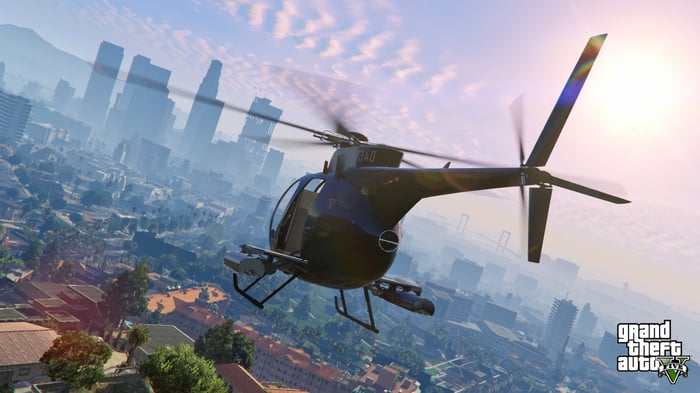 Take-Two has consistently beat its own earnings targets and analyst estimates over the last year, and continued sales from Grand Theft Auto V's online component have been the driving factor in the company surpassing expectations.

In recent quarters, management has guided for declining performance from Grand Theft Auto Online, but strong sales for the core game, better-than-anticipated player retention, and the addition of new modes have helped the game's digital bookings continue to grow. Recurrent consumer spending (a term used to describe in-game content sales made after the initial purchase) constituted 50% of total digital sales in the quarter and fiscal year, with Grand Theft Auto Online being the chief sales driver. Here's CEO Strauss Zelnick on the significance of GTA V's hit online component [transcript via Thomson StreetEvents]:

In addition, Grand Theft Auto Online again delivered year-over-year bookings growth in the fourth quarter, substantially exceeding our expectations, and was the single largest contributor to recurrent consumer spending. Rockstar Games has driven sustained engagement through the ongoing release of a wide array of additional content. ... It's a remarkable achievement that recurrent consumer spending on Grand Theft Auto Online has grown every year since its release and reached record levels in fiscal 2017 more than three years after its initial launch.

Take-Two and Grand Theft Auto series developer Rockstar Games have done a great job supporting the game, and continued updates should ensure that the mode continues to post strong sales down the line. Zelnick reiterated expectations that revenue from Grand Theft Auto Online will begin to moderate in calendar 2018. He also emphasized, however, that while the company is targeting for declining sales, it's never had a comparable title, so future performance is difficult to map.

The company's NBA 2K franchise has been a strong performer and appears to have great momentum. Said Zelnick:

Engagement with and recurrent consumer spending on our industry-leading basketball series continues to grow, with over 2 billion games of NBA 2K17 played on PlayStation 4 and Xbox One, up 16% over NBA 2K16. More than 1.3 billion of these games were multiplayer, a 40% increase, and the average time the consumer spent playing multiplayer games increased by nearly 30%. This remarkably strong engagement helps to drive record recurrent consumer spending on NBA 2K, which grew 71% during fiscal 2017.

It's worth pointing out that the company didn't break out digital-sales figures for WWE 2K17 -- a possible indication that they haven't been that impressive. However, Zelnick did state that Take-Two sees WWE 2K as a growth driver for digital sales this year and that there's a long-term growth opportunity with the wrestling franchise, so the omission might not be significant.

Take-Two is just getting started in mobile

Mobile gaming now generates more revenue than the PC or console segments, and Take-Two has the opportunity to claim a much bigger slice of what's already a $41 billion market. In order to speed its growth in the category, the company acquired developer Social Point earlier this year in a $250 million cash-and-stock deal. Take-Two expects that roughly 6% of its revenue in the current fiscal year will come from Social Point, or between $117 million and $123 million based on its sales target.

Here's Zelnick on the performance and outlook for the company's recent acquisition:

And Social Point, which we acquired in January, already is outperforming our expectations. Bookings from its two biggest games, Dragon City and Monster Legends, grew in the fourth quarter, and daily average revenue per user increased nearly 30%. We expect this acquisition to be a significant contributor to recurrent consumer spending in fiscal 2018 and a meaningful growth opportunity over the long term.

In terms of earnings, Social Point's sellers are set up to receive bonuses for EBITDA contributions in excess of $32.5 million in 2017 and $38 million in 2018. Management wouldn't comment on whether $38 million was the figure that it had factored into guidance for the current fiscal year, but those numbers are likely in line with the mobile developer's short-term earnings and growth outlook.

Management stated that Social Point has multiple games planned for release over the next two years, though it was unclear on whether there would be a release in fiscal 2018. Whether some of the mobile developer's upcoming games will make use of established Take-Two intellectual properties is also unclear, but mobile titles are likely to be an avenue to continued growth as they become a much bigger part of the company's digital-sales story.