The restaurant industry has struggled overall, but the pain has been worse for full-service sit-down chains including DineEquity's (NYSE:DIN) Applebee's and the now-bankrupt Ignite Restaurant Group's (NASDAQ: IRG) Joe's Crab Shack.

Those chains and much of the full-service segment has suffered for a number of reasons. The first is simply that traffic to restaurants overall has been down, likely because the internet has made it so people can shop without leaving their houses. The second, and perhaps the one that should scare the industry the most, is that fast-casual concepts have taken business by offering cheaper prices, with food that's equal (if not better than) the meals served at sit-down eateries.

Consumer acceptance of limited-service brands (what many think of as fast food) has been driven by chains like Chick-fil-A and Panera Bread (NASDAQ:PNRA), companies that offer higher-end food. That has led to a first for the fast-food industry which is bad news for full-service restaurant companies, according to a new report from the American Customer Satisfaction Index (ACSI).

Consumer satisfaction in the Accommodation and Food Services sector is down 0.9% to 78.0 on ACSI's 100-point scale. That drop is due to "a sharp drop in customer satisfaction with full-service restaurants," according to the just-released report. 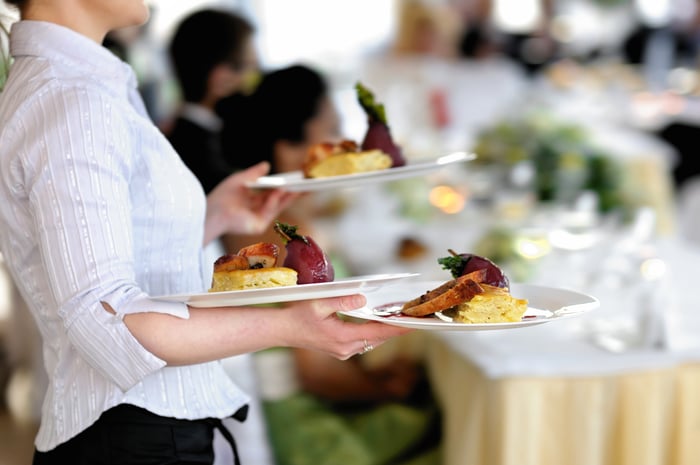 Struggling full-service brands like Applebee's have made menu tweaks and marketing changes in order to win customers back. Those efforts may prove futile because offering a few new dishes or creating a clever slogan does not address the industry's underlying problem.

"Full-service restaurants cannot lose to fast food on quality and customer satisfaction because they can't compete on price," said ACSI Chairman Claes Fornell in a press release. "If a lower-price competitor has higher customer satisfaction than a rival that competes on quality, the latter is obviously in serious trouble. Low price alone rarely leads to high levels of satisfaction, but high quality usually does."

Prices are going up at full-service restaurants, according to the ACSI report, but consumers don't believe the quality of their offerings justifies that. Basically when you have chains like Panera, Chick Fil-A, and even a recovering Chipotle offering food that consumers perceive as being high quality, the value of being served by a waiter does not justify the difference in cost.

Numbers are down in most categories

While some full-service chains including top-rated Cracker Barrel (NASDAQ:CBRL) saw their scores improve, the overall industry was rated less well. On a series of nine questions asked by ACSI, full-service restaurants lost ground on all except "courtesy and helpfulness of waitstaff," which stayed the same, and "website satisfaction," which climbed from an 83 in 2016 to an 84 this year.

The industry lost ground in categories including "food quality," "variety of food," and "accuracy of food orders." Those are areas that are almost certainly being impacted by the improved perception that consumers have for many fast-food/limited-service brands. It's also worth noting that on the same nine questions, the limited-service industry stayed the same or improved in every category except "website satisfaction," where it dropped from an 83 last year to an 82 in 2017.

What can the industry do?

Consumers have not stopped wanting to eat out. They just have become more careful with their dollars. If they can eat a satisfying, high-quality meal at Panera Bread or Chick-fil-A for less money than going to a full-service restaurant, they clearly will.

Addressing that means giving consumers a reason to spend more. Cracker Barrel, which at an ACSI of 84 topped its category, but came in below Chick-fil-A's industry-leading 87, clearly does that. The chain has its engaging, kitschy retail stores, along with games on its tables, and a menu that pushes value.

That's a recipe the rest of the full-service industry should look at. Bringing customers back requires a combination of value and offering experiences that limited-service restaurants can't offer. That's not a simple problem to solve and it's one that involves sacrificing margin for the hope of volume -- a dicey proposition for chains that are already in financial distress.