Here are a few of the ways you can expect Whole Foods to change once Amazon takes over.

By now, most of the country has probably heard that Amazon.com, Inc. (AMZN -1.65%) is buying Whole Foods Market, Inc. (WFM) for $13.7 billion. The deal announced last Friday set off waves throughout the food retail industry as competitor stocks, including Wal-Mart, Costco Wholesale, Target, and Kroger, all plummeted.

Clearly, the market fears what Amazon CEO Jeff Bezos will do with one of the country's best-known supermarket chains. But while it's clear that the market approves of the deal, and some have even speculated that another offer could emerge as shares have risen past the buyout price, the question of how Whole Foods will change under Amazon's guidance remains open. 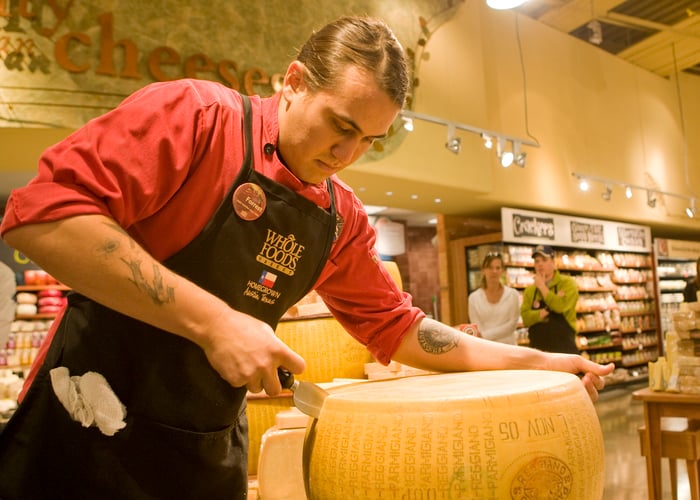 Here are three areas that investors and Whole Foods customers can expect to change soon after the deal closes, which is planned for the second half of the year.

In addition to its e-commerce might, Amazon is no slouch in the technology realm. It has become a respected innovator with its leading cloud computing service, Amazon Web Services, and devices such as the Echo, driven by the voice-activated Alexa technology.

Amazon's most ambitious designs on physical retail came with the Amazon Go cashierless convenience store, which relies on a network of cameras and other sensors to determine what items a customer takes off the shelves and charge them accordingly. The technology is still being fine-tuned as the store is only open to Amazon employees for the time being, but it could potentially revolutionize the industry.

Amazon could begin experimenting with some version of the "Just Walk Out" technology in Whole Foods, and the company will likely look to make the checkout process more seamless. In all of its brick-and-mortar formats, which now include seven AmazonBooks stores and two AmazonFresh pickup sites, the company does not accept cash, preferring to rely on credit cards and payments through the Amazon app instead. Expect Whole Foods to move closer to automated payments when Amazon takes over, which should save the company money and make the customer experience faster and more convenient. A Bloomberg source said the company would look to trim headcount, which would likely include cashiers, though a spokesperson for Amazon said it was not planning to cut jobs.

Whole Foods' biggest problem has been its reputation for high prices. The company has gained the moniker "Whole Paycheck," and when the deal was reported many joked on Twitter that the price was nothing for a Whole Foods shopper.

WHO AMONG US can leave a Whole Foods without spending $13.7 billion.

What Whole Foods needs most, then, in order to break its streak of seven straight declines in comparable sales and return to profit growth, is to bring its prices more in line with those of competitors and erase the perception of being a ripoff.

Amazon can help with that in two ways. First, by combining its own supply chain, logistics, and buying power, the company should be able to lower supply chain-related costs at Whole Foods and negotiate lower price on goods. Second, and more importantly, Amazon is an expert at price manipulation. Its prices online change constantly to react to competitor moves and other factors like supply and demand, and the company often prices popular items competitively to create the perception that everything it sells is low-priced. Such a strategy and pricing algorithm could help Whole Foods overcome its pricey reputation. The company is already using digital price tags at its new 365 stores. I'd expect Amazon to roll those out at all Whole Foods location so that the company can experiment with customer responses to different prices and quickly adjust them as needed.

Ten years ago Amazon launched AmazonFresh, its first attempt to break into groceries. The company tested that format for six years before expanding it to other cities, and like the rest of its e-commerce business, it's entirely dependent on delivery. Despite the company's purchase of brick-and-mortar supermarket chain with more than 400 locations nationwide, Amazon and Bezos likely see delivery as a way to differentiate itself from competitors and bring value to its customers. Amazon can use Whole Foods stores as a staging ground for its own AmazonFresh deliveries, or a combined delivery program. Whole Foods currently partners with, and is also an investor in, Instacart, and it's unclear what will happen to that partnership once Amazon takes over.

Still, Whole Foods has hundred of stores close to the affluent customers Amazon targets for its Fresh program. Shortening the distance between it and its customers will make delivery easier and allow Amazon to lower costs. That could lead to the company lowering the $15/month premium on Fresh membership to $10/month or less. Either way, it's clear that the Whole Foods-Amazon combination will make delivery more powerful.