Please ensure Javascript is enabled for purposes of website accessibility
Log In Help Join The Motley Fool
Free Article Join Over 1 Million Premium Members And Get More In-Depth Stock Guidance and Research
By Rich Duprey - Jun 21, 2017 at 7:44AM

The fashion retailer's Anthropologie chain seems like it's making a big mistake.

Urban Outfitters (URBN 6.21%) still thinks customers want to spend all day hanging out in its stores rather than coming in, finding what they want, and getting on with their day. Despite lower sales and falling comparable store sales, it remains committed to turning its Anthropologie brand into the women's apparel equivalent of Ikea.

Although not very many new stores will be opened in the U.S., Urban Outfitters says it will continue to remodel its existing stores into its expanded footprint format. It maintains customers want an experience when they go shopping, but that seems to belie the retailer's own experience: Anthropologie hasn't recorded a single instance of higher quarterly comps in almost two years and its performance has deteriorated since the endeavor launched. In fact, it appears the decline is accelerating. 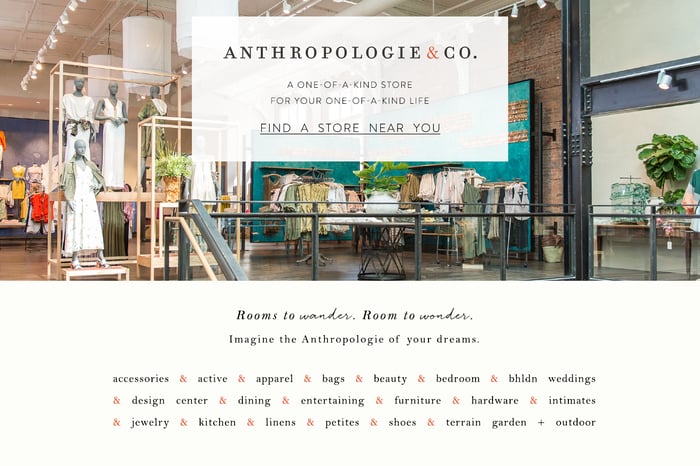 This past quarter Urban Outfitters said total net sales were flat, but only because its direct-to-consumer e-commerce segment grew at double-digit rates. Anthropology, on the other hand, was the retailer's worst segment, with comps falling 4.4% for the period. 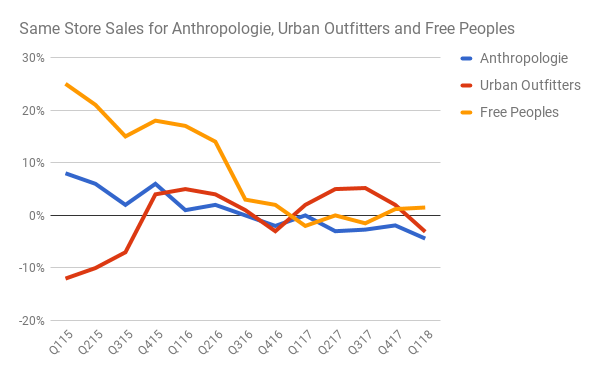 On its earnings conference call with analysts, David McCreight, Urban Outfitters' President, and Anthropologie's CEO, essentially blamed the quarter's fashion miss on going too casual. While the apparel market has decidedly moved in the direction of making everyday "dress down Friday," McCreight said the stores overcompensated and missed out on selling customers dressier clothes. He contended it's a relatively easy correction to make.

Still, even he seems to acknowledge that customers don't to want to spend more time in his stores (or anyone else's for that matter). The executive admitted all three brands experienced sluggish customer traffic because despite his brands delivering "some of the best, most creative store experiences in the world, however, it's clear that these experiences currently aren't enough to overcome the decline in traffic and the tepid interest in apparel in stores."

So if that's true, why is he doubling down on making his stores quasi-destination locations no one wants to visit? In addition to apparel, Anthropologie also features home goods from its BHLDN and Terrain brands, beauty supplies, and a dozen restaurants, half of which were acquired last year (it plans on opening another in the fiscal year 2018).

We all know the cause of retail's distress: Greater numbers of customers are doing their shopping online, which is causing fewer of them to visit the mall, whether to shop at a destination store or otherwise. 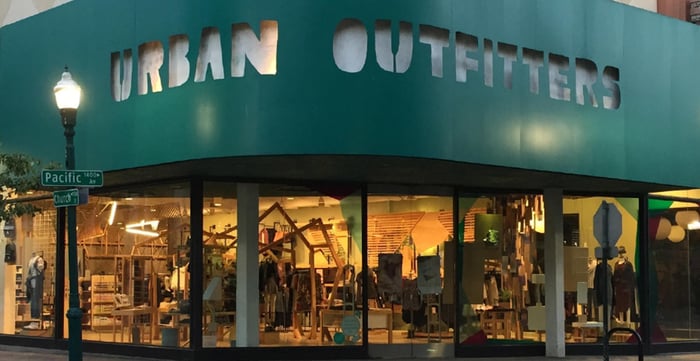 According to Credit Suisse, a record 8,600 stores will close their doors this year, more than even the number that shuttered during the recession, and that will only serve to accelerate the move by customers to the online arena. Analysts estimate e-commerce will account for 35% of all retail sales by 2030.

It's smart that Urban Outfitters says it won't be investing very much in opening up new stores in the U.S., regardless of concept, preferring instead to see stores expand in international markets. But its decision to keep expanding Anthropologie still smacks of refusing to admit it made a mistake. Making its stores larger can only mean it's going to take longer to find what you want. Just think about the difficulty of finding that one item you want in an Ikea and having to traverse the whole store to get there. Apparel stores don't translate well to a "treasure hunt" experience and the restaurant industry is in the midst of a protracted slump.

The Free People and namesake Urban Outfitter brands have hit-or-miss track records lately, though in the past both were retail industry stalwart performers. Even so, despite falling on hard times as well, they're still able to bring in customers more often than not. The Anthropologie story is one of a brand in a steady decline that's only getting worse.

There is probably some opportunity abroad and Urban Outfitters is committing more resources to its digital efforts, both seemingly solid moves in a difficult environment, but it also remains wedded to the belief that Anthropologie will be a "dominant lifestyle brand." Having unveiled the vision three years ago, and only seeing brick-and-mortar retail going into more of a tailspin, there just doesn't appear to be much progress made toward that aim and its refusal to admit it made a mistake suggests it will only go lower.