Investors shouldn't expect too many surprises when it comes to earnings calls at Accenture (NYSE:ACN). The company has met Wall Street expectations for seven of the last eight quarters and is likely to do the same when it reports its third quarter numbers on Thursday before market open. The analyst consensus puts expected revenue at $8.83 billion, toward the high end of management's guidance of $8.65 billion to $8.90 billion. Wall Street also sees adjusted earnings of $1.52 per share, an increase of 8% over the same quarter last year.

While revenue and earnings get the bulk of the attention during earnings reports, I want to dig a little deeper -- particularly to see how Accenture is performing in its target growth areas. I'm also interested in seeing whether the company can continue to allocate capital as successfully as it has in the past. 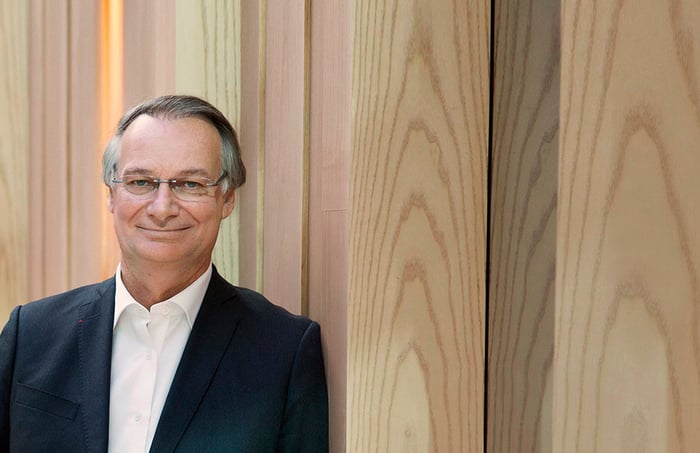 The plan to grow the top line

Accenture has enjoyed progress growing digital, cloud, and security services, in addition to developing markets. Regarding the former, CFO David Rowland expressed optimism for the remainder of the year during the previous earnings call:

[W]e are pleased with our overall results so far this year. And we're encouraged by the trends we see in the market and the potential for even stronger growth and momentum in the second half of the year.

In the second quarter, Accenture reported double-digit growth in digital, cloud, and security services, which now make up more than 45% of total revenue -- up from the approximately 40% reported at the turn of fiscal 2016. The company has invested heavily to stay ahead of the curve, announcing or closing 15 acquisitions in just a few months, the majority of which fall under this segment.

As for its growth abroad, the company has found success growing its footprint in Asia Pacific, Latin America, Africa, Middle East, and Turkey. Year to date, it has grown revenue 10% to $3.1 billion in these regions, and management expects that growth to accelerate during the second half of the year.

However, it's no secret that the world is becoming more dependent on digital technology each day. The IT consultant is not the only company aggressively pursuing the space. Cognizant Technology, IBM, and a slew of smaller competitors are also going after a piece of the pie. While Accenture is trying to stamp itself as the leading consultant in digital technology, it may come at a steep price.

Gross margins have declined over the past three years. The company has seen a slight improvement in margins since August of last year but whether it can keep up this momentum remains to be seen. 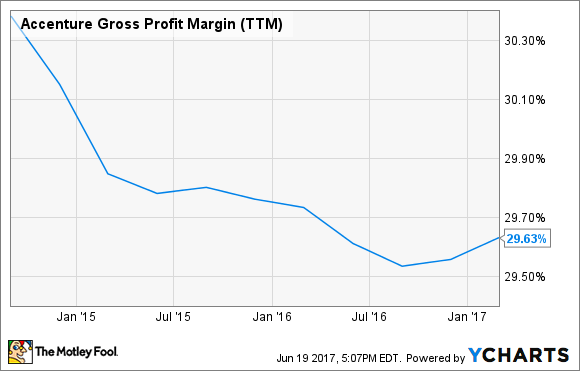 Another item I'll be watching is day services outstanding, or DSO. This is a metric indicating the average number of days it takes the company to receive compensation for services provided. A rising DSO indicates the company is not being paid as quickly. Last quarter, Accenture reported a DSO of 42 days, up from 39 days in previous periods. This can be due to less creditworthy clients or more favorable customer terms. Given the competition in digital consulting, the latter is more likely in Accenture's case.

For the second quarter, Accenture reported trailing twelve month return on invested capital (ROIC) of 48%, while return on equity (ROE) and return on assets (ROA) were 52% and 19%, respectively. Higher returns on capital are expected for a capital light, service-driven business like Accenture. Though these numbers are impressive, all three metrics are actually trending in the wrong direction. ROIC and ROE are at their lowest levels in the past two years, and ROA is the lowest it has been in five quarters.

Declining returns on capital over a short period of time are not reason enough to be concerned, but if the trend continues, it may warrant a closer evaluation of the company's investments.

Accenture management expects to close the second half of 2017 strong. It already raised guidance once this year. But while revenue and earnings will make headlines come Thursday, investors should keep a close eye on these underlying metrics and trends.