Amazon.com, Inc.'s (NASDAQ:AMZN) $13.7 billion acquisition of Whole Foods Market, Inc. (NASDAQ:WFM) last week was a shot across the bow for the grocery industry.

Food retailers, including Wal-Mart (NYSE:WMT), Costco (NASDAQ:COST), and Kroger (NYSE:KR), all fell by 5% or more, with Kroger stock down double-digits that day.

The combination of the world's foremost e-commerce business with the most respected brand in organic and natural groceries creates a threat unlike anything the industry has ever seen, but even before that news broke, the sector was already struggling. Grocery stocks plummeted last Thursday after Kroger reported disappointing first-quarter results and lowered its earnings guidance for the year. The S&P 500 food retail sub index fell by more than 15% that day as the news weighed heavily on peers like Sprouts Farmers Market (NASDAQ:SFM), Supervalu (NYSE:SVU), and Whole Foods.

Below are three factors that are challenging the industry, even before the Amazon-Whole Foods deal. 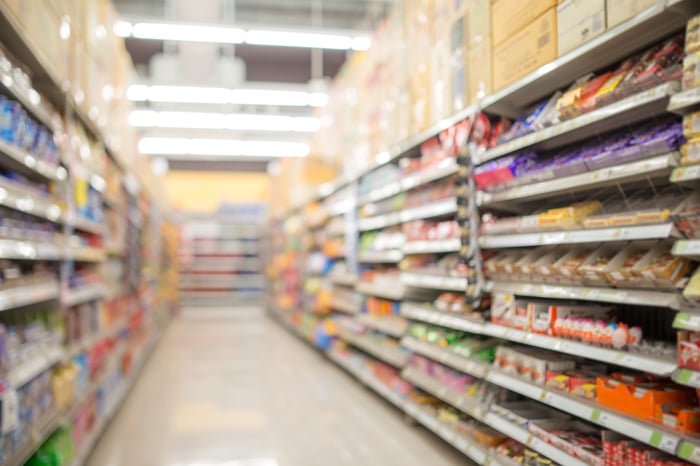 Lower commodity food prices may sound like good news for supermarkets, but they've weighed on revenue, compressed profits, and accelerated a price war. Food prices have fallen for the longest sustained period in 50 years as egg prices recovered from an avian flu epidemic and beef, poultry, and dairy prices have largely been down.

A number of chains, including Sprouts and Kroger, noted deflationary pressures when they lowered their guidance last year, and lower prices were largely responsible for the end of Kroger's 52-quarter streak of same-store sales growth earlier this year.

At the same time, higher labor costs resulting from minimum wage hikes and a tighter labor market have forced supermarket chains to pay workers more. Wal-Mart lifted its base wage to $10/hour last year, and Kroger said on its earnings call last week that it was lifting its pay in some competitive markets.

Deflationary pressures are expected to ease up later in the year, but the damage to grocery stocks has already been done.

Amazon's acquisition of Whole Foods is the most obvious example of the tightening competitive landscape in the industry, but even before the Whole Foods deal, Amazon was stepping up its investments in groceries. It expanded AmazonFresh to a number of cities last year, and opened the first two AmazonFresh pick-up stations earlier this year in Seattle. It's also testing the cashierless Amazon Go convenience store, also in Seattle, which has the power to revolutionize the whole industry if the technology behind it proves successful.

Elsewhere, German discounter Lidl just opened the first of as many as 600 stores in the US. The chain known for rock-bottom prices is expected to pressure Wal-Mart, having leveled its Asda subsidiary in the U.K., and also dollar-store chains. Its fellow German discounter says it will add another 800 stores over the next five years, upping the pressure on downscale stores. Meanwhile, entrenched chains like Wal-Mart, Costco, and Target continue to add new stores, and meal-kit concepts like Blue Apron (NYSE:APRN) have popped up, taking billions of dollars in sales from traditional grocery stores.

The rub with all this additional competition is that someone has to lose. Unlike other industries, volume sales of groceries are essentially fixed as individual appetites aren't growing and the U.S. population expands by only about 1% annually. In other words, room for growth is very limited in the market.

Supermarkets haven't experienced the upheaval that, say, department stores have, but the changing retail landscape is affecting storefronts of all kinds as falling traffic is bad for any brick-and-mortar business. Notably, while supermarkets are struggling, so are many restaurant chains, though pizza delivery continues to be one of the few food concepts that have thrived since the recession, as Domino's Pizza and Papa John's shares have soared. As Americans get used to shopping online and streaming movies and TV shows, it only makes sense that they would want their food delivered as well, which also explains the growing popularity of meal kit services.

Supermarkets are adapting -- many have partnered with Instacart or other delivery services, and chains like Wal-Mart and Kroger have invested heavily in grocery pick-up kiosks as a compromise between delivery and in-store shopping. But there's a cost to these adjustments. Wal-Mart doesn't even charge for its pick-up service, yet it still has to pay for the additional level of service involved, as well as the buildout costs for the kiosks.

As consumer habits change, grocery chains will have to continue to adapt, and that likely means increased costs, at least in the near-term. With Amazon's reputation for crushing industry margins, a challenging situation now only looks worse.