Income investors love high-yield dividend stocks -- stocks that pay out a high dividend relative to the value of their stock price. But here's the thing: Some stocks pay out too much money as dividends.

Generosity may be a virtue, but when a stock pays out more money in dividends (the dividend yield) than it earns as profits (the payout ratio), that's being generous to a fault. It's a practice that could prove unsustainable, and if it leads the company to cut its dividend, it could leave investors in the lurch. 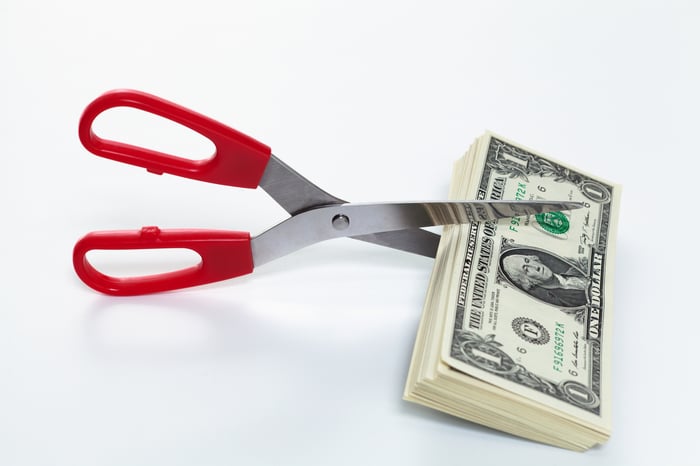 These three dividends could be in for a cut. Image source: Getty Images.

That's the danger that investors in Frontline (NYSE:FRO), in BP plc (NYSE:BP), and in Eni S.p.A. (NYSE:E) face as well.

Sinking in a sea of oil

Big oil, according to the market prognosticators, is in a bear market once again. With oil prices down below $43 a barrel on Tuesday, the oil market as a whole is off 23% from where it started the year. OPEC is cutting production in an attempt to shore up prices. Problem is, there's such a glut of supply already in storage that just cutting the production of new oil isn't enough to change pricing immediately.

This is bad news for oil companies. It's particularly bad news for a company like Frontline, which makes its money shipping oil around the globe to countries that need it -- because if everyone already has enough oil in storage, then they don't have any real need to pay Frontline to ship over some more oil.

You can see this dynamic at play on Frontline's income statement, which had been showing some recovery on the revenue front but saw revenue fall 22% in Q1 -- and profit is down three times as much, at 66%. That marked the fourth straight quarter of declining profit for Frontline, and it's starting to put pressure on the company's dividend, which sits 58% higher than the profit Frontline earns to pay it with. Adding to the company's problems, cash reserves are dwindling, down 35% from 2015 levels at $181 million, and debt levels are swelling, up 44% from 2015 and rapidly approaching $1.1 billion.

With its forward dividend now set at $0.60, Frontline is already on course to pay less in dividends over the next 12 months than it paid over the past 12 months. I wouldn't be surprised to see that dividend go even lower.

BP -- no longer quite "beyond petroleum"

Once upon a time, oil company British Petroleum declared itself "BP" and claimed the name stood for "beyond petroleum." That didn't last very long. By 2011, BP had exited its solar-power business, and two years later, it was out of the wind biz as well. Today, BP probably translates better as "basically, petroleum."

With oil selling for under $43 a barrel, that's not great news for folks who like BP's dividend.

After first raising its dividend to $0.40 back in 2014, BP has kept it there for two more years. Problem is, no sooner had BP raised its dividend than its revenue and profit began to fall. From a recent high of $380 billion in 2013, BP's revenue fell by more than half -- to less than $183 billion -- last year. Profit, which reached $1.23 per share in 2013, amounted to literally just one penny in 2016 -- and they were negative the year before that.

Today, with $0.11 in trailing profit, BP is paying out nearly four times as much cash in dividends as it's earning from the oil it produces -- a situation that simply cannot stand. Unless oil prices mount back up over $50 soon, I'd be shocked if we don't see BP announce a dividend cut, and soon.

Eni-body see where our profit went?

The situation is similar at oil company Eni S.p.A., Italy's answer to Britain's BP. The downturn came quicker to Eni than it did to BP, with sales cresting at $168 billion in 2012 -- and falling by nearly two-thirds to below $59 billion last year. Profit suffered an even worse blow, plunging from $2.84 per share in 2012 to reported losses in each of 2015 and 2016.

Today, with profit rebounding somewhat in Q1, Eni boasts $0.09 in trailing earnings per share -- but that's barely a tenth of what the oil company is paying its shareholders in dividends annually.

Granted, analysts still have high hopes that both BP and Eni will see their profits return to more normal levels this year. (Frontline may take a bit longer. Analysts forecast losses for Frontline this year and a bit of profit in 2018, with more stable profitability not returning before 2019.) Projections are for profit to come in at $1.42 per share for Eni this year, and $1.91 for BP -- and then to march steadily higher as oil prices stabilize and rise.

With oil selling for well under $50 a barrel, though, I'm not sure how realistic those projections are. Anyone buying these "oil stocks" for their dividend had better keep a close eye on the price of oil itself -- because unless it goes up, these dividends are going down.