Chipotle Mexican Grill stock has plunged this week because of a recent guidance update -- even though Chipotle's 2017 forecast hasn't changed in the past two months.

Since hitting a new 52-week high just shy of $500 in mid-May, shares of Chipotle Mexican Grill (CMG 0.47%) have sagged, punctuated by a 7.3% plunge on Tuesday. Chipotle stock closed at just $417.71 on Wednesday, its lowest level since March.

Chipotle's wipeout on Tuesday appears to have been driven by a recent securities filing "to reaffirm and clarify its guidance" for the rest of the year. Shareholders were apparently displeased with Chipotle's forecast. Yet the company didn't change its guidance at all. This makes the recent pullback in the stock a nice buying opportunity for long-term investors. 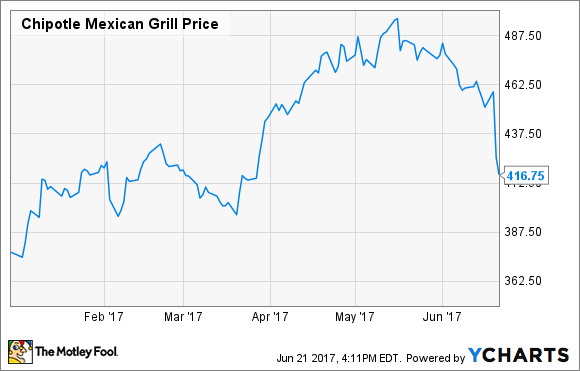 In an SEC filing posted on Monday, Chipotle noted that food costs are likely to increase in Q2 over the first quarter, as will marketing and promotional costs. Investors reacted as if this margin pressure were a surprise. Yet management had already highlighted all of the data points cited in this week's filing in Chipotle's Q1 earnings release and/or the subsequent earnings call.

For example, Chipotle stated that food costs will come in at about 34.2% of sales this quarter, up from 33.8% in the first quarter. This lines up precisely with CFO Jack Hartung's statement on the Q1 earnings call that food costs as a percentage of sales were likely to increase by 40 basis points, or 0.4 percentage points, relative to Q1, because of high avocado costs.

Similarly, the filing indicated that marketing and promotion costs would total 3.6%-3.7% of revenue this quarter, up from 3.4% in the first quarter. Hartung had already stated that this would be the case, during the first-quarter earnings call.

In fact, the only things that have changed about Chipotle's 2017 forecast since last October are that it now expects a slightly lower full-year tax rate, and that management now refers to its $10 EPS target as a stretch goal.

Notwithstanding all of the media coverage and the stock reaction, Chipotle Mexican Grill didn't reduce its guidance this week. Based on the extent of investors' disappointment, it seems clear that many people expected Chipotle to easily beat the revenue and cost forecasts management had provided in late April.

Instead, investors should be encouraged that Chipotle is maintaining its 2017 guidance despite a payment-card security breach that the company disclosed in late April. The negative publicity associated with security breaches of this sort often drives a short-term drop-off in customer traffic. As a result, it would have been unrealistic to expect meaningful acceleration in sales trends over the past two months.

As long as Chipotle can avoid further mishaps, such as another food-safety lapse or security breach, it should be able to gradually reclaim its reputation and drive meaningful long-term sales growth. Investors may be anxious for signs of a revenue and earnings recovery, but all that really matters is that Chipotle continues to progress in rebuilding its business.

As a result, only patient investors should own Chipotle Mexican Grill stock right now. The company has a good chance to recover from its self-inflicted wounds, but there's no way to be sure how long that will take.