The office furniture company fell after missing expectations to start its fiscal year. Here's what investors need to know.

Shares of Steelcase Inc. (SCS) were down 13.8% as of 3 p.m. EDT on Thursday after the office furniture specialist announced weaker-than-expected fiscal first-quarter 2017 results.

Quarterly revenue climbed 2.3% year over year (or 4% on an organic basis) to $735.1 million, and translated to a 16.7% decline in adjusted earnings to $0.15 per share. Analysts, on average, were anticipating higher adjusted earnings of $0.19 per share on revenue of $745 million. 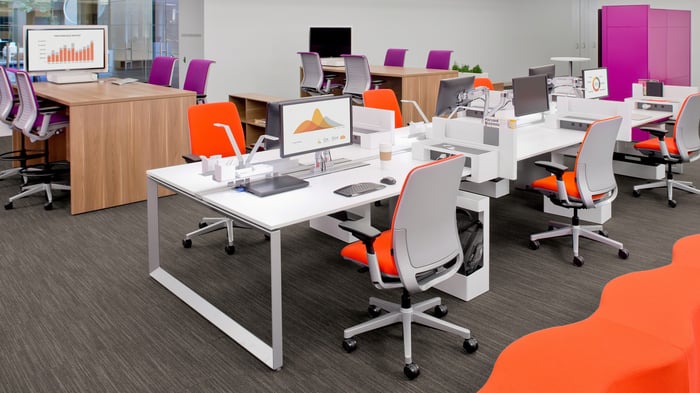 Even so, Steelcase CEO Jim Keane noted that while order patterns overall were mixed by segment, the results were "consistent" with the company's expectations. Keane also elaborated that order growth from new products in the Americas has been "strong," and that the company is on pace to launch new products this fiscal year at a faster pace than in any of its past five years.

But Steelcase expects current-quarter revenue to be in the range of $750 million to $780 million, which should translate to earnings per share between $0.21 to $0.25. Both ranges are well below Wall Street's models, which called for earnings of $0.35 per share on revenue of $793.7 million.

In the end, this was a simple case of Steelcase falling short of the market's expectations and offering underwhelming guidance. So it's no surprise to see shares pulling back on Thursday.