It's been less than five years since cloud-based human capital management and financial management provider Workday, Inc. (NASDAQ:WDAY) went public. In that time, the stock has more than doubled, handily outpacing rivals Oracle and SAP, which are up around 50% during the same period. 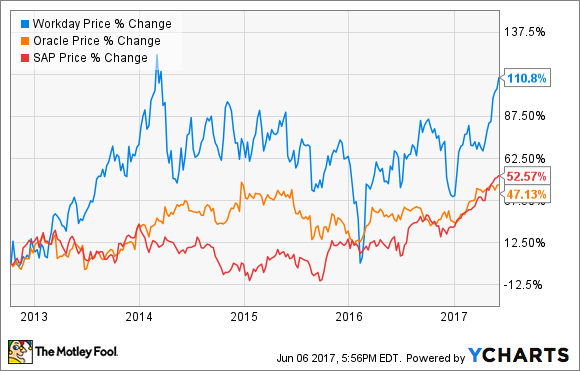 Workday's returns since its IPO have been impressive, but peeling back the onion a bit, half that increase has occurred since the beginning of this year as Wall Street appears optimistic about improved offerings and increasing market share. With its recent run, it's understandable that investors would be hesitant to invest in a company that is still seeking profitability. In fact, many investors may be thinking about cashing in their chips. However, the company still appears to have room to run. Here are four reasons I like the company and its stock, even at today's prices.

As Workday matures, it's only natural that growth at the company slows, which did happen for a time at Workday. The chart below shows Workday's quarterly revenue growth from its IPO until July 2016. 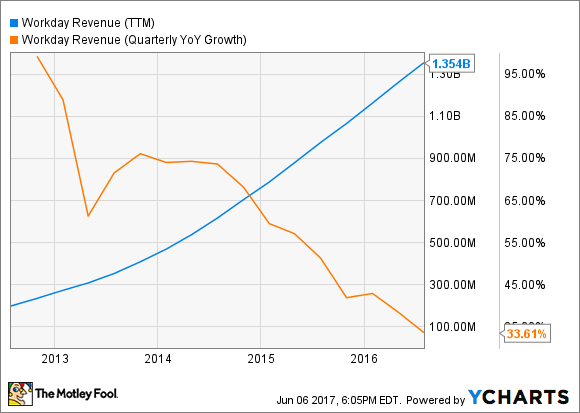 However, since then, growth has picked up in every quarter, accelerating the most in the most recent quarter ending in April. 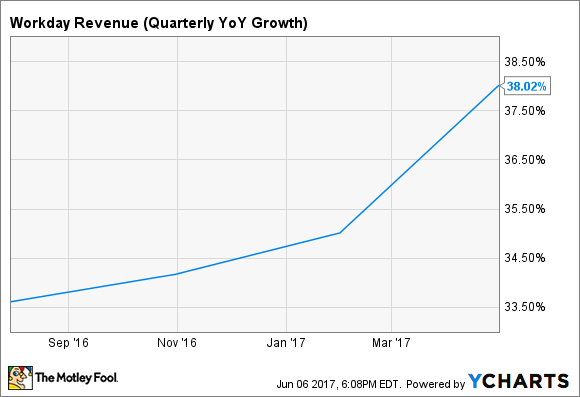 Even more impressive is that Workday's bread-and-butter source of revenue, subscription fees, were up 42.7% in the last quarter, an increase from 39% during the same period last year. Over the last year, Workday has increased momentum with Workday Financial Management, the company's core finance and accounting management application, along with other add-on solutions. It has also succeeded in obtaining larger enterprise customers as the company said it had its highest growth in its annualized contract value in three years.

Success outside of core product

One of the reasons for the uptick in revenue growth is the momentum in Workday Financial Management. In Q2, Workday added 29 new core financial management customers, including Nasdaq and and Nuffield Health, the U.K.'s largest not-for-profit healthcare provider. Workday also announced deals with 21st Century Fox and CNA Financial Corporation.

In addition to success in its financial management suite, Workday Planning, which offers the ability to collaborate on financial and workforce plans, now boasts over 140 customers, which CEO Aneel Bhusri called one its best new product launches. Workday Learning, its learning management system, is up to 165 customers. The company is not resting on the laurels of its past successes either, as the company looks to gain momentum in its new analytics offerings. Bhusri made the following comment in the company's latest earnings call [transcript via Seeking Alpha] :

On the [heels] of the success of Workday Planning and Workday Learning we are seeing increased levels of activity around Workday Financial Performance Management, a new SKU [stock keeping unit] we introduced at the start of the fiscal year and high levels of interests in Workday Prism Analytics, our advanced analytics offering that will become available with Workday 29 in the fall. And stay tuned for some other exciting offerings that we will discuss in the upcoming months.

The HCM [human capital management] field is where Workday has had most of its success. Although not all its sales are related to HCM, with trailing-12-month revenue of $1.7 billion and a total addressable market estimated by IDC at $13 billion, Workday still has ways to go in capturing more share. However, analytics and financials are estimated to be $19 billion and $27 billion markets, respectively. If Workday can capture meaningful market share in these areas, its growth may prove to be in the early innings.

As a pure SaaS [software as a service] provider, Workday is more attractive to smaller budgets that may put on-premise solutions out of reach. Therefore, it's a natural fit for the mid-size market where it has seen a lot of success. 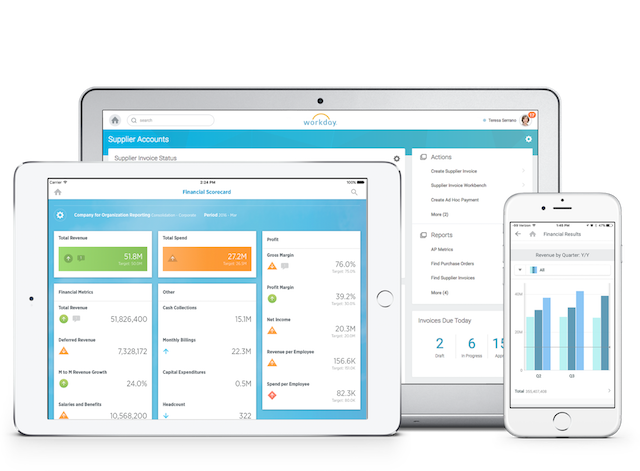 With Nasdaq and 21st Century Fox, Workday has shown it can succeed with larger enterprises, too. However, the company had even bigger wins in the HCM space. This year, the company has added Amazon, Wal-Mart, and Target as customers. Qantas Airways also signed up, covering 45,000 employees in 26 countries. Human capital management is Workday's strength. Now that it has its foot in the door with heavy hitters, expect the company to make inroads in the much larger financial management market.

Workday stock currently trades at over 12 times sales. Salesforce, which has a business model comparable to Workday, is trading at 7 times sales. Despite Salesforce being a more mature company, Workday still appears richly valued at first glance. However, I believe it may still have room to run.

Last summer, Oracle purchased cloud enterprise resource planning provider Netsuite for $9.3 billion, a valuation of 11 times NetSuite's previous 12 months revenue, which could provide insight into what Workday is worth. This acquisition provides a good yardstick for Workday as Netsuite exhibited 15 straight quarters of revenue growth over 30% prior to the acquisition -- a feat accomplished by Workday over a longer time frame. With the overall market trading at higher levels than last summer, especially among tech companies, paying 12 times sales for a company with Workday's growth is not far off from what Oracle paid for NetSuite.

Additionally, Workday boasts a market capitalization of $21 billion. Salesforce was a $21 billion company in July 2011. At that time, similar to Workday, it also traded around 12 times sales with revenue just under $2 billion. Not too many analysts or investors would have called the company undervalued. Today, Salesforce sports a market capitalization just under $65 billion, triple its value from 2011. Whether Workday can execute as well as Salesforce remains to be seen, but between human capital management, financial management, and analytics, Workday's total addressable market is estimated to be over $65 billion. According to Gartner, the customer relationship market in which Salesforce specializes is estimated to be $36.5 billion in 2017. Although there are no guarantees that Workday can become as successful as Salesforce, I see many similarities between the two companies.

Between accelerating revenue growth, the addition of successful product lines, and signing up big customers, Workday has a lot going for it. This has been reflected in the stock price. However, the market may just be underestimating how large Workday may become.