Turning VR into a business is easier said than done, but these four have a shot at leading the industry.

Virtual reality has been a topic of conversation for years, but it's been far from a big business. The HTC Vive has popped up, Facebook's (META -1.19%) Oculus is now available, and Sony's (SONY -0.71%) PlayStation VR are some of the industry leaders, but they're far from household staples.

Where VR may gain some traction in coming years is in VR arcades or theaters. Here are four U.S. publicly traded companies that could play big roles in building the VR business of the future. 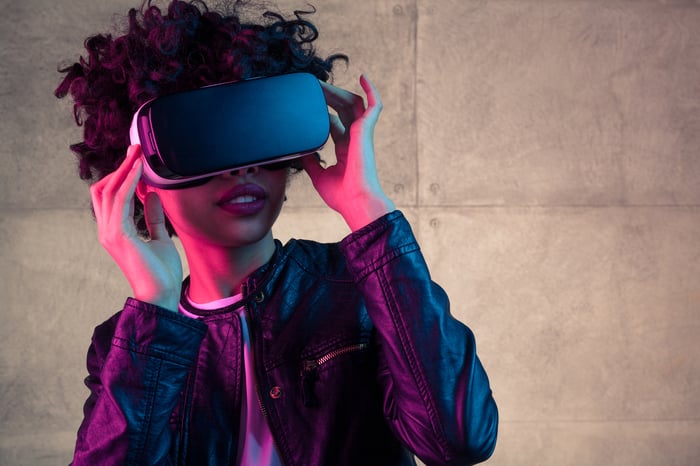 HTC and Facebook's Oculus platform are the two clear leaders in VR today. Oculus also works with Samsung Gear VR, so it's a broader hardware platform than other competitors. The Oculus site is also one of the most complete platforms for developers, with a store that connects users with content.

For now, Facebook is pushing into the VR space largely hoping to get users to use the technology at home. Most VR arcades today are using HTC or other platforms, not Oculus. VR arcades are popular in Asia and are growing in the U.S., though, so if Facebook can adapt its model to move beyond sales to home users, bringing in business customers like arcades, this could be THE leading VR platform.

Sony's PlayStation VR headset is one of the best in the industry and plugs right into a PlayStation 4. That makes it easy to use and accessible to millions of customers. But it could also limit Sony's long-term potential in VR.

Two surprisingly aggressive VR companies are IMAX (IMAX 1.07%) and AMC Theaters (AMC). The two have launched an IMAX VR Center in New York City within an AMC multiplex. IMAX is developing its own VR content and has a flagship location in Los Angeles where it's testing the VR concept on its own.

The two companies are offering a place to watch VR content, although that could change into more game content depending on what's successful. As a content and technology company, IMAX is a key player to watch in VR. It could bring some very interesting content to the industry, and if it can develop an experience that works well in the theater setting it can leverage partnerships with companies like AMC to grow in VR. Right now, IMAX and AMC are just feeling out what works in the industry, but don't be surprised if this becomes a big business for them in the future.