From warfare to earth-fare, drones are everywhere today.

It seems everywhere you look these days, you find drones buzzing around.

In the newspapers, information about drones most commonly appears in the form of military "drone strike" headlines. Just like a fighter jet, military drones can carry bombs and missiles and attack targets on the ground. The main differences between piloted fighter jets and pilot-less drones are that the latter: (1) are remotely operated by a pilot on the ground, (2) are smaller and carry less ordnance, and (3) fly slower, consume less fuel, and therefore are able to remain airborne and "loiter" around an area looking for targets for longer.

Therefore, looking for targets and shooting targets are the two primary uses of military drones today. In contrast, commercial drones are being used for a variety of purposes -- from package delivery to heavy construction, maintaining energy infrastructure, and even crop-dusting. 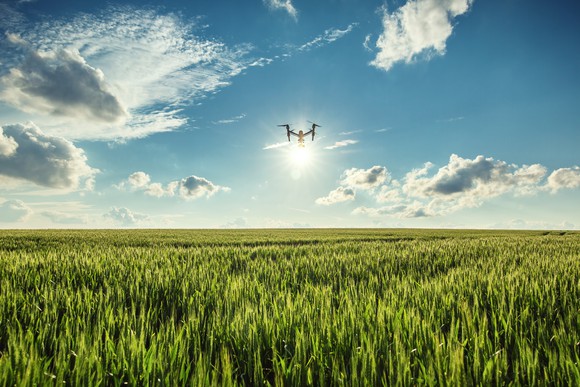 Here's just one thing that drones are currently being used for today. Image source: Getty Images.

How are drones used?

How are commercial drones being used today? Let me count the ways! Generally speaking, the purpose of a drone is to cut costs for its operator. A drone performs the same tasks that a piloted helicopter or airplane might perform, but because it's smaller, cheaper to build, and doesn't require a professional pilot to fly, it performs those tasks more cheaply. Thus, anything you can imagine a piloted aircraft doing, you can find (or will soon find) businesses using drones for the same thing.

Here are just four examples of what drones are currently being used for today.

You've probably heard by now how Amazon.com is trying to put drones into service delivering packages from its warehouses. What you may not have heard is that Amazon arch-rival Wal-Mart has a similar plan in the works. UPS is experimenting with package delivery by drone, flying drones off of mobile delivery vans to reach locations off the beaten path. Britain's post office, the Royal Mail, is likewise looking into drone package delivery.

Accounting firm PriceWaterhouseCoopers sees drone use as a $5 billion opportunity in the construction industry by 2020 and a big driver of cost-reduction. Combining efficient digital data collection with lower costs from not having to pay pilots, drones can be used to survey the progress of construction projects with "accuracy previously unknown in the industry," says Fortune magazine. With better data in hand, construction companies can "more efficiently deploy resources around a job site, minimize potential issues, trim costs, and limit delays."

Already, start-ups are springing up to deploy software specially designed to help drones do this kind of work, and companies such as 3D Robotics are designing drones specifically with an eye to performing construction surveys. In Spain, the Roman Catholic church is even using drones to help complete construction of Barcelona's Basilica i Temple Expiatori de la Sagrada Familia, a project that began in 1882.

Reaching as high as 300-plus feet in the sky, wind turbines are incredibly difficult things to inspect by eyeball. Yet everywhere you look, windmill farms are dotting the landscape all around the globe. Energy companies are beginning to use drones to inspect windmills for signs of stress.

And it's not only "green energy" that has found a use for newfangled drones. When it appeared on the market late last year, AeroVironment's (AVAV -2.17%) new "Quantix" drone was immediately touted as a tool for the oil industry, capable of flying 40 miles of pipeline on a single charge and surveying the status of oil pipelines all along the way. Indeed, one of the very first commercial uses of drones recorded was when oil company BP obtained FAA permission to use an AeroVironment Puma drone to help monitor its oil fields and pipelines in Prudhoe Bay, Alaska. With Quantix weighing in at a svelte five pounds, with only a 3.2-foot wingspan but an ability to fly 45 minutes before recharging, surveying pipelines -- and stopping leaks before they turn into man-made (and PR) disasters -- will soon be cheaper than ever.

Equipped with advanced sensors, small drones can survey farm fields to monitor the health of crops and the hydration of soil. AeroVironment also touts Quantix's abilities in this "field," noting that the drone's dual 18 megapixel video cameras can take high-resolution color and multispectral video of the ground from 400 feet up. And Quantix's batteries hold enough charge to allow the drone to survey 400 acres of cropland per flight. While up there, Drones for Dummies reports that drones such as Quantix can "detect the presence of crop-wrecking bugs and then even deploy hyper accurate pesticide applications."

In fact, they already are doing this. In 2015, the Federal Aviation Administration approved a 200-lb. RMAX unmanned helicopter for use in spraying crops and deploying fertilizer. Just one year later, Juniper Research estimated that 48% of all drones sold for commercial use last year were sold for use in the agricultural sector. And now, Bank of America is saying it expects that drone sales targeting better agricultural performance could account for up to 80% of the commercial drone market -- and $82 billion in sales -- over the next decade.

This means the most surprising result of this survey is this: What are drones currently being used for today? More often than not, they're farming.