At the company's annual shareholder meeting this May, roughly 62% of the votes were in favor of having ExxonMobil (NYSE:XOM) more deeply analyze and disclose the risks posed to its business from climate change. That was up sharply from 38% of the vote a similar proposal garnered in 2016. Shareholders large and small clearly want to know what climate risks are on the horizon, and understandably so, but what about the opportunities climate change presents?

Well, it didn't take long to receive an answer. ExxonMobil and its partner Synthetic Genomics Inc. (SGI) announced a breakthrough in their long-standing $600 million collaboration to develop what some consider the Holy Grail of energy: algae biofuels. After announcing a setback in 2013, this week the pair revealed that they have stumbled on a new genetic switch that allows photosynthetic algae to produce twice the oil content within their cells while maintaining the same growth rate.

The companies have hailed it as a "breakthrough" in their development efforts, with ExxonMobil quick to tie this milestone to the opportunities for its business presented by climate change. So should investors breathe a sigh of relief or remain more cautious given a long list of failures of algae biofuels to date? 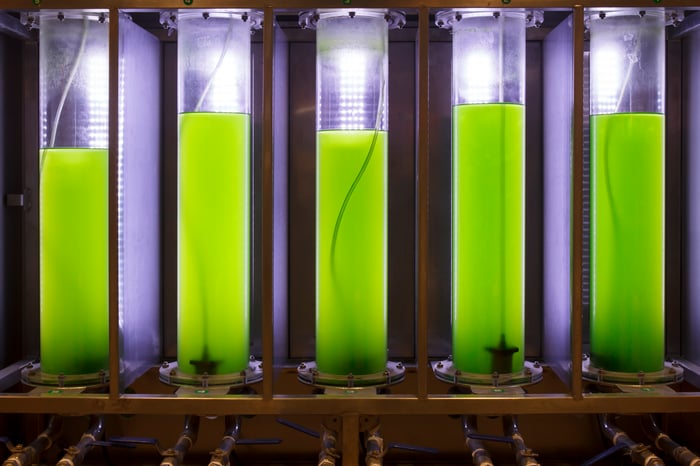 The timing is poetic in a way. Four years ago this month, most of the internet mischaracterized an announcement from the partnership. After spending $100 million of a pledged $600 million, ExxonMobil and SGI announced they had failed to find a wild-type algae that met their lofty goals. That is, non-genetically engineered algae samples found after (literally) sailing around the world collecting water samples failed to produce enough oil to be economically viable in a commercial production system. Although quick to pile onto the blame train for algae biofuels, most missed the point that the collaboration was next turning to engineered biology. It still figured to be the best shot on goal yet for delivering on the promise of algae biofuels.

The recent announcement proves that the genetic treasure trove amassed from SGI's circumnavigation really did provide an advantage. After all, even if the non-engineered algae samples didn't prove viable, they collectively contained a ridiculous amount of genetic information hinting at what to do next. Throw in new CRISPR gene-editing techniques that weren't available in 2013, and you arrive at a doubling of oil content produced per individual algae cell without affecting the growth rate. A breakthrough indeed.

Of course, ExxonMobil and SGI were careful to note that although this was a major breakthrough in their collaboration, additional improvements were needed before the technology could be commercialized. A look at the numbers explains why.

While 64 million acres may seem like an expansive area, it's not that ridiculous. The United States plants 40 million acres of corn each year to replace less than 7% of the nation's gasoline supply with ethanol, with the remainder being exported. Increase that acreage by 50%, replace it with algae oil production systems, and we could, on paper, replace 48% of our total crude oil consumption -- including chemical production -- with net-zero-carbon algal fuels.

It's not that simple, of course, but the point is that further increasing the productivity of the algae will reduce the amount of land required for production. It may sound hypocritical, given that a twofold improvement is considered a breakthrough, but further advances in microbial growth rates and process control could potentially allow for similarly large leaps in production. At that point, investors could really begin to get excited.

The good news is that the cost of inputs for such a system is incredibly low, which is what makes algal oils the Holy Grail of liquid energy in the first place. Sunlight is free; industrial CO2 isn't far behind; the algae strain in development can grow in salty, non-potable water; and existing crude oil refineries can process algal oil into transportation fuels identical to petroleum-derived diesel.

The bad news is that while operational costs are relatively cheap, the majority of the costs are realized upfront. It requires a lot of energy and piping and concrete to build algae ponds and runways that cover hundreds and thousands of acres. It may be what keeps the technology, and ExxonMobil's dreams of discovering economical algae biofuels, on the sidelines for good -- no matter the productivity breakthroughs.

Therefore, this announcement is a mixed bag. Investors shouldn't discount that algal biofuels may still be the Holy Grail of energy production, but they may not be the Holy Grail that saves ExxonMobil from its current climate risks.

Editor's note: A previous version of this article referred to Synthetic Genomics as Synthetic Genetics. The Fool regrets the error.