Value investors sometimes have to be willing to be bold if they want to get a great deal. To help you generate a few stock ideas that could be great buys right now, we asked a team of Foolish investors to highlight a company that they think could be an unconventional bargain. Here's why they picked Royal Dutch Shell plc (NYSE:RDS.A)(NYSE:RDS.B), International Business Machine (NYSE:IBM), and Priceline Group (NASDAQ:BKNG). 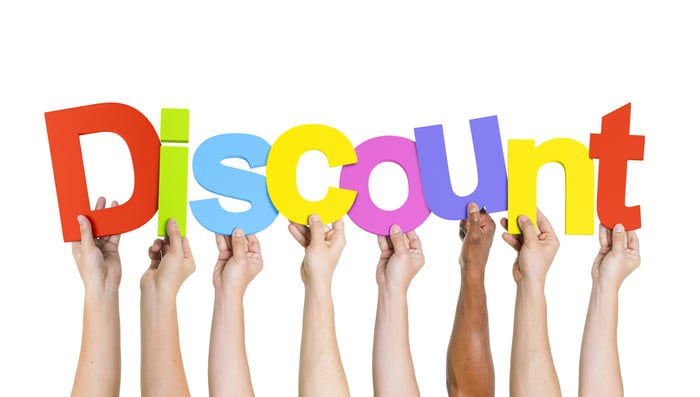 Keith Noonan (IBM): Staring down 20 consecutive quarters of sales declines and the likelihood that its next earnings release will extend this unenviable streak, IBM stock may require an investor to have a degree of boldness to get on board. That's true even as the stock trades at just 11 times forward earnings estimates and packs a nearly 4% dividend yield.

With sales of its legacy hardware and software offerings stuck in reverse, and uncertainty surrounding the extent to which the company's newer business ventures will deliver long-term success, there are reasons the stock trades at such a low multiple. However, I think those who take the plunge will be rewarded over time.

The company's strategic-imperatives segment, which consists of analytics, cloud, security, mobile, and machine learning services, is growing at a healthy clip -- with a combined 12% increase in year-over-year sales last quarter and room for continued gains thanks to some standout technologies. The company's cognitive-solutions segment grew just over 2% last quarter, but $4.1 billion in sales is nothing to sneeze at, and its Watson cognitive-computing platform is also integrated with the company's cloud platform. Cloud revenue increased 33% last quarter, and though the possibility exists that the company's cloud business will run up against a wall because of competition from Amazon.com and Microsoft, it appears to have avenues to ongoing success in the fast-growing market.

IBM's strategic-imperatives businesses are also delivering better margins than those that are fading -- a factor that has management guiding for a return to earnings growth this year. Between earnings momentum, a low multiple, and a hefty dividend, IBM has a turnaround story that's worth the risk.

Reuben Gregg Brewer (Royal Dutch Shell plc): Royal Dutch Shell is offering investors a roughly 6.7% yield. That's enticing to say the least at a time when the S&P 500 yields around 2%. The problem is that Shell is an integrated oil giant, and we all "know" that oil is doomed. At least that's what appears to be the general consensus, since carbon fuels are on the outs today.

Over the long term, that's probably true. But getting from today to a carbon fuel-free future isn't going to be a quick transition. And then there are the other things that oil (and natural gas) get used for, such as chemicals. This carbon fuel is hardly dead yet. Better yet, Shell is actively working to improve its future even if oil prices remain low.

For example, it made a bold investment during the oil downturn that increased its debt load by 50% in a single year. It's addressing that issue with plans to sell $30 billion worth of assets -- it's already completed or inked deals for roughly two-thirds of that total. And since the big acquisition, the company's return on capital employed has started to move higher, closing a historical gap with longtime industry leader ExxonMobil. Shell has also gotten itself back into the black with enough cash flow to cover its generous dividend and its capital spending. 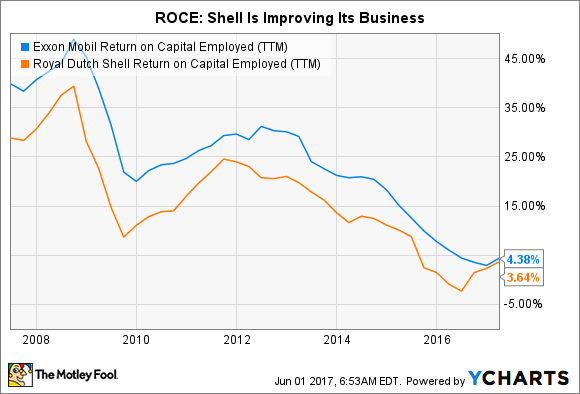 If you're willing to wager that the oil industry isn't dead yet, Shell is a good way to play it. You'll get a generous dividend and a business with improving fundamentals -- even if oil prices remain stuck in their current, relatively low price range.

Not your typical value stock

Before we harp on the valuation, let's review how this company makes money. Priceline Groups owns a number of leading travel-related websites. Beyond priceline.com, this company also owns Open Table, Kayak.com, Rentalcars.com, and its crown jewel, Booking.com. These various sites attract travelers who want to bargain-hunt for their next vacation, and Priceline Group earns a commission each time something is booked on its site. With millions of consumers flocking to its sites every year, those commissions add to up to billions in revenue and soaring profitability. 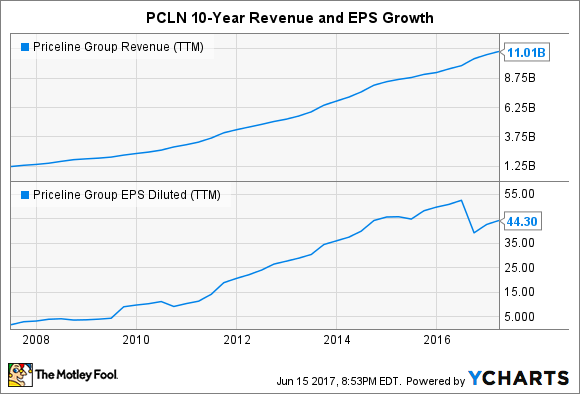 I think the odds are good that Priceline can keep its growth streak going, because the global online travel market is estimated to be worth more than $492 billion. That's a truly massive market for Priceline to attack, so I can't help feeling that Wall Street's estimate of 17% profit growth annually from here is achievable.

With growth on the horizon, I think the best way to value Priceline is by looking at the forward P/E ratio. This metric shows that the Priceline Group's stock is trading around 21 times next year's earnings estimates. That's not a number classically considered to be "cheap," but I think it is a bargain for this high-quality business.