Shares of biopharma AVEO Oncology (NASDAQ:AVEO) had a wild day today -- losing nearly 12% early before finishing strong, and posting intraday gains of nearly 14% -- after the company announced two financial transactions that will provide about $14 million in gross proceeds. The funding provided by a combination of debt and newly issued shares will be able to fund planned operations through the end of 2018, according to management.

Today's news follows a surprise announcement last week from the Committee for Medicinal Products for Human Use (CHMP) in the European Union, which recommended AVEO Oncology's lead drug candidate for marketing approval. The European Medicines Agency still needs to approve the drug, but it generally follows CHMP recommendations. As of 3:43 p.m. EDT, the stock had settled to a 5.1% gain. 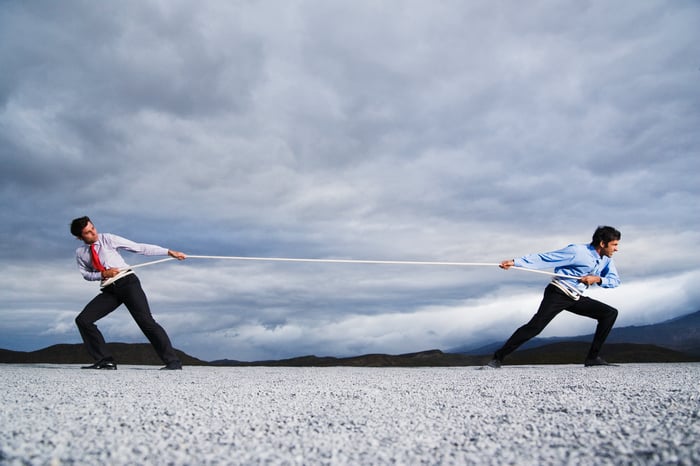 Before the surprise announcement last Friday, Wall Street had little to no faith in AVEO Oncology, which carried a market cap of $77 million this time last week. Analysts and investors have quickly been playing catch-up, however, and have pushed shares nearly 200% higher in just three days.

The funding announcement today only added to the volatility. While management was wise to issue shares under an existing agreement and take advantage of its good fortune, the offering price wasn't set by negotiations or general interest level but instead occurred at at-the-market pricing. In other words, the company launched out of the gate this morning by pushing approximately $9 million in newly issued shares onto the market, like it or not. (The remaining $5 million of the $14 million total gross proceeds was drawn from a credit facility.)

That helped push shares lower this morning, but investors saw an opportunity and pounced, which resulted in the strong recovery over the course of the day.

Why? The positive recommendation from CHMP on Fotivda for treating renal cell carcinoma is obviously good news, but investors are looking to the release of data from a phase 3 trial for the same drug and indication currently under way in the United States. That readout is expected to occur in the first quarter of 2018. Plus, there are additional combination studies under way or on the radar for the once-forgotten drug candidate. Now that it's showing promise, all bets are off.

Things are moving awfully fast for AVEO Oncology right now. That increases the chances that investors (and traders) are pulling the trigger first and asking questions about the details later. It's still best to slow down, dig through the study results, digest them, and then make a decision about an investment. If the company really does have a winner on its hands, then you'll have plenty of time to ride that success even if you slow things down, especially considering its relatively low $350 million market cap right now. By contrast, rushing into a position could backfire if things don't add up as traders hope.