Nike Inc. (NYSE:NKE) announced fiscal fourth-quarter 2017 results on Thursday after the market closed, with solid growth led by strength in both Nike's international and direct-to-consumer businesses. With shares of the sportswear and footwear juggernaut up nearly 8% in after-hours trading, let's take a closer look at how Nike ended its latest fiscal year. 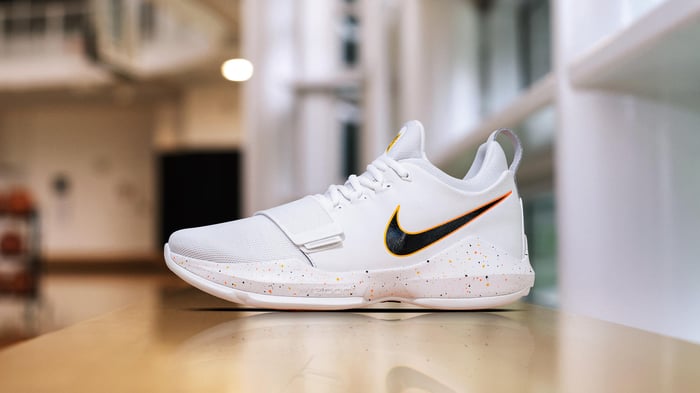 NIKE continues to create both near-term wins in today's dynamic environment and a lasting foundation for future growth. Through our Consumer Direct Offense, we're putting even more firepower behind our greatest opportunities in Fiscal 2018. It will be a big year for NIKE innovation and we'll bring those stories to life through deeper consumer connections in our key cities around the world.

For the current fiscal first quarter of 2018 -- and keeping in mind year-over-year comps are difficult given a combination of the Olympics last year, the European Football Championship, foreign-exchange rates, and Nike's strategic exit from the Golf Equipment business -- Nike expects reported revenue to be flat compared to last year's fiscal Q1. On a normalized basis, however, Nike's growth will remain roughly in line with the rates we've seen in its past couple of quarters.

Looking to the full fiscal year of 2018, Nike expects currency-neutral revenue growth in the mid- to high-single-digit range, with broad geographic growth led by continued strength overseas. In addition, CFO Andy Campion stated Nike expects adjusted gross margin "to expand beyond the high end of our stated long-term goal of 30 to 50 basis points per year."

All things considered, this was another solid performance with which Nike demonstrated its ongoing industry dominance on a global stage. As the company continues to deliver on its long-term goals, it's no surprise to see shares approaching a fresh 52-week high as of this writing.