A little over two weeks ago, Amazon.com (NASDAQ:AMZN) announced a deal to acquire organic grocer Whole Foods Market (NASDAQ:WFM) for $42 per share, or roughly $13.7 billion. It was immediately apparent that the agreement would have massive implications for the future of the industry. The market saw shares of several large grocery chains plunge on the news in response, among them a nearly 6% single-day decline from Costco (NASDAQ:COST).

After all, it stands to reason that as Amazon uses Whole Foods to impose its margin-destroying, market share-taking ways on the grocery space, it could come at the expense of low-cost businesses like Costco.

But this raises the question: Should investors buy shares of Costco on the dip? And perhaps even more interesting, could there possibly be a case to buy Whole Foods today? Let's take a closer look to find out. 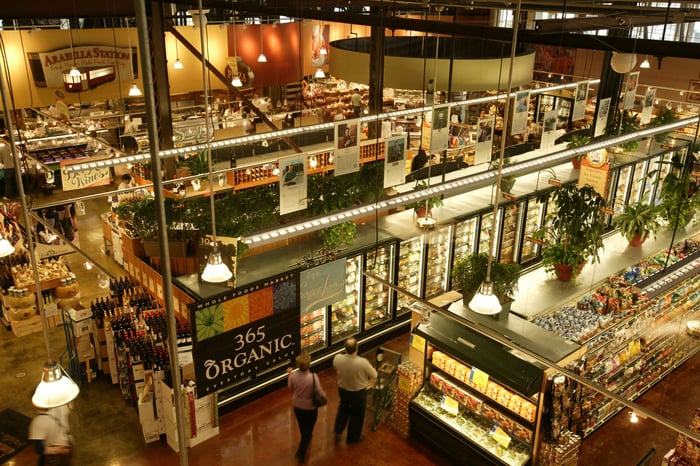 So why buy Costco today? For one, Costco has consistently demonstrated its uncanny ability to weather today's changing retail landscape, delivering solid growth despite the shift to online retail sources in recent years. Last quarter, for example, sales climbed 8% year over year to $28.22 billion, including a 5% increase in comparable-store sales. Costco can largely thank high shopper loyalty and its membership-based model for that strength. The company achieved an impressive 90.2% membership renewal rate last quarter in the U.S. and an 87.5% renewal rate worldwide.

But there are a couple things investors should watch to that end. First, Costco implemented its usual annual fee increases of $5 to $10 per member -- a move that will impact around 35 million member households -- at the beginning of June, so we should keep an eye out to ensure membership renewal rates remain high as a key indicator of the stickiness of Costco's business. Assuming they do -- as per usual when Costco increases rates -- it will go a long way toward continuing to insulate Costco from any margin-destroying moves that Amazon might decide to push going forward.

What's more, it will take time for Amazon's vision for Whole Foods (which remains unclear at this point) to play out. So Costco should still have plenty of time to adjust its own way forward accordingly.

The case for Whole Foods Market

As it stands, Whole Foods stock closed on Friday at $42.11 per share -- that's slightly above Amazon's agreed $42 acquisition price -- and traded as high as $43.84 per share in the days following the acquisition announcement.

But why? For the one and only reason you might want to buy Whole Foods now: The prospect of another acquirer stepping in with an even more competitive bid to rival Amazon's offer.

To be sure -- and perhaps predictably -- multiple law firms promptly announced investigations into whether Amazon was paying enough for Whole Foods under the agreement and whether Whole Foods has breached its fiduciary duty to investors by accepting the deal. After all, while Whole Foods stock was propelled to a fresh 52-week-high on the news, shares are still well off their 2015 highs as the chain has been forced to repeatedly cut prices and slow new store development plans as it fended off competition.

Many Wall Street analysts and fellow Fools alike couldn't help but wonder whether another grocery giant would step in to improve Amazon's bid. In doing so, those rival bidders could either expand their own brick-and-mortar grocery presence or simply prevent Amazon from doing so in an effort to stave off the impending competitive threat.

But make no mistake: This option looks less likely with each passing day. On June 23, Whole Foods confirmed that it has not received any other offers, which is why shares have continued to creep back toward Amazon's bid.

So, in the end, while there's certainly a possibility that could change, I think investors today would do better to buy shares of Costco while they're still down.