With the stock market seemingly bumping up against a new all-time high every few days, it's getting harder for value investors to find good stocks to buy. In fact, the S&P 500 currently trades at a gaudy price-to-earnings ratio of 25.6, well above the mid-teens average throughout its history. That said, there are some values out there, especially in the energy sector given oil's recent plunge back into bear-market territory.

Two companies that caught my eye are pipeline giants Kinder Morgan (KMI 0.87%) and Enterprise Products Partners (EPD 0.54%). Despite generating exceptionally steady cash flow over the past year, both companies' stocks are down double digits from their 52-week highs, making them compelling buys for long-term investors. That said, for investors who are hunting for value, Kinder Morgan is the clear top choice for two reasons. 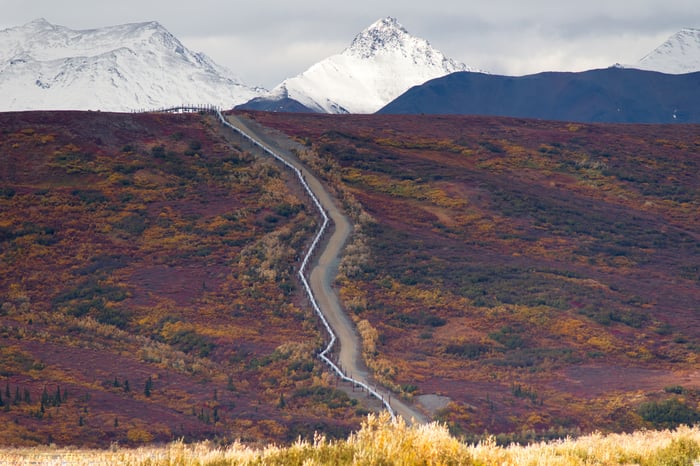 1. It's ridiculously cheap on a cash-flow basis

Typically, the easiest way to value a stock is to look at it price-to-earnings ratio. However, that number isn't helpful when evaluating pipeline companies because they often take large depreciation charges and other writedowns that can wipe out earnings. For example, Kinder Morgan only reported $552 million (or $0.25 per share) in net income last year after booking a $610 million loss on an equity investment and recording $2.3 billion of depreciation and amortization. Because of that, the stock looks quite pricey at nearly 75 times earnings given its current $19 share price, especially when Enterprise Products Partners trades around 21 times earnings.

That said, both companies are much cheaper when we look at cash flow, which is why that metric is more important when valuing pipeline companies. In Kinder Morgan's case, it generated $4.5 billion of distributable cash flow last year, or about $2.02 per share. At its current price, shares are trading at just 9.4 times cash flow. Contrast that with Enterprise Products Partners, which currently trades at 13.3 times its distributable cash flow. While that is a more reasonable valuation multiple for a pipeline company, it's toward the lower end of the value range. 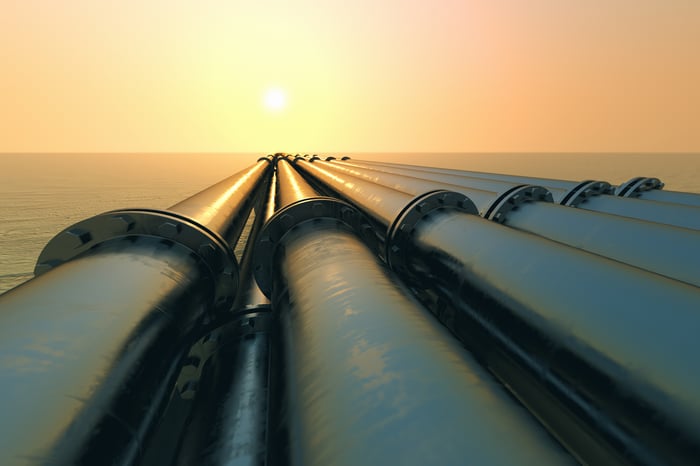 2. It's even cheaper when factoring in future growth

Investors currently value Kinder Morgan as if it will never grow cash flow again, which couldn't be further from the truth. That's because the company has $11.7 billion of growth projects in development that should enter service through the end of 2019. The company plans to invest 88% of that capital into fee-based pipeline and terminal projects, which it anticipates will supply it with $1.5 billion of annual adjusted EBITDA by 2020, assuming its controversial Trans Mountain Pipeline expansion comes online as expected. That forecast suggests adjusted EBITDA will increase about 20% over the next three years, without factoring in any benefit from its oil business. If the company completes its $1.5 billion in high-return oil projects over the next five years, the carbon dioxide segment's distributable cash flow will increase from around $750 million to more than $1 billion annually by 2019, assuming crude prices cooperate and hit $60 a barrel in two years. These projections imply robust cash flow growth for a company of Kinder Morgan's size over the next few years if everything goes according to plan.

Enterprise Products Partners also expects to grow cash flow at a brisk pace over the next few years because it has $8.4 billion of capital projects in its backlog. For a company that has the same $80 billion enterprise value as Kinder Morgan, these growth initiatives have the potential to supply similar needle-moving growth. Furthermore, about a third of those projects should enter service this year, with the balance split between 2018 and 2019. It's also worth noting that long-term fee-based contracts underpin all those projects, which face minimal risk of getting delayed due to permitting issues or environmental concerns since most run through the pro-energy state of Texas.

That lower-risk growth is one reason Enterprise Products Partners trades at a higher valuation than Kinder Morgan. In a sense, investors are discounting Kinder Morgan's growth because of increasing worries that its Trans Mountain Pipeline expansion will face long delays due to recent elections in Canada and intense opposition. Given that this project represents 46% of its total backlog, delays could have a significant impact on its growth assumptions. That said, the higher risk could lead to greater future rewards because investors can buy Kinder Morgan's growing cash flow stream for such a low price these days.

Given the sell-off in the energy market this year due to tumbling crude prices, both Kinder Morgan and Enterprise Products Partners are compelling value stocks right now, especially compared to the rest of the market. That said, Kinder Morgan is the better choice for investors looking for a deep value stock since it sells for a much cheaper cash flow multiple than Enterprise Products Partners, despite having equally impressive growth potential.

Why Kinder Morgan Stock Topped the Market on Thursday
397%