Investors were obviously impressed by Oracle's (NYSE:ORCL) recently announced fiscal fourth quarter in which cloud revenue continued to soar and earnings-per-share (EPS) excluding one-time items obliterated expectations. Oracle shares jumped 8% following the news, and are up 31% in 2017. Toss in Oracle's 1.5% dividend yield and it makes a strong argument for Oracle being a better stock to buy than Microsoft (NASDAQ:MSFT).

But before Microsoft fans throw in the towel, its relatively meek performance this year -- its share price is up 11% -- could prove to be great news for value investors. After factoring in Microsoft's 2.25% dividend yield, folks seeking both growth and income have their own argument as to which is the better buy.

Oracle's transition to cloud solutions has also been a boon to its annual recurring revenue. As co-CEO Mark Hurd pointed out, Oracle sold an impressive $855 million in annual recurring cloud revenue last quarter pushing its total for the fiscal year to over $2 billion.

Not surprisingly, Oracle's legacy hardware business continues to wane, sinking 13% to $1.11 billion. But that's quickly becoming a side note as Oracle continues its transformation. Another positive from last quarter was Oracle's expense management, which eked up a mere 3%.

Given Oracle's push into new offerings and cutting-edge markets, the slight jump in overhead was more than acceptable, and helped drive a 10% increase in adjusted EPS to $0.89, well above expectations. The question that has plagued Oracle is whether or not it can continue its rapid cloud growth, and it's clear investors got the answers they were hoping for. 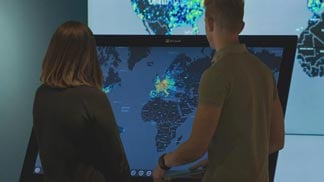 Though Oracle's 60% increase in cloud sales to $4.57 billion last year was impressive, it pales in comparison to Microsoft's annual run rate of more than $15.2 billion. CEO Satya Nadella got Microsoft pointed in the right direction long before Ellison set aside is anti-cloud bias and finally climbed onboard, and the results are evident.

In a market expected to generate nearly $250 billion in revenue this year, Microsoft is the hands-down leader in the cloud largely for the same reason Oracle is gaining steam: A focus on SaaS. Outside of advertising, business process and software delivered via the cloud are the two largest opportunities with a combined $90 billion in sales expected this year.

Last quarter's 93% rise in Microsoft's Azure cloud platform revenue was nice, but it was the positive impact it had on SaaS results that really impressed. Microsoft's Dynamics 365 customer relationship management delivered in the cloud soared 81%, its Office 365 revenue grew 45%, which were just two of the reasons its service revenue sky-rocketed 40% to $8.7 billion last quarter.

Despite an increase in research and development costs, Microsoft has kept a lid on spending, which resulted in a 30% jump in EPS to $0.61 in its fiscal third quarter. In addition to its dominant cloud SaaS position, Microsoft is also leading the augmented reality (AR) charge, which is expected to generate $83 billion in revenue by 2021.

There's no denying Oracle's up-and-coming cloud presence, though its ridiculously high year-over-year growth should be taken in context. Let's face it, its cloud sales comparables are on the low end relative to industry-leading Microsoft, but at least Oracle is finally backing up its talk with results.

But Microsoft's current cloud performance and relative value combined with forays into AR and artificial intelligence (AI) to name only a couple opportunities with unlimited potential, give it the nod for investors in search of long-term growth.