Grocery stocks plummeted on the news, with Kroger (NYSE:KR), Supervalu, Sprouts Farmers Market, Wal-Mart (NYSE:WMT), Costco, and Target falling by at least 5%, with some down well into the double-digits. 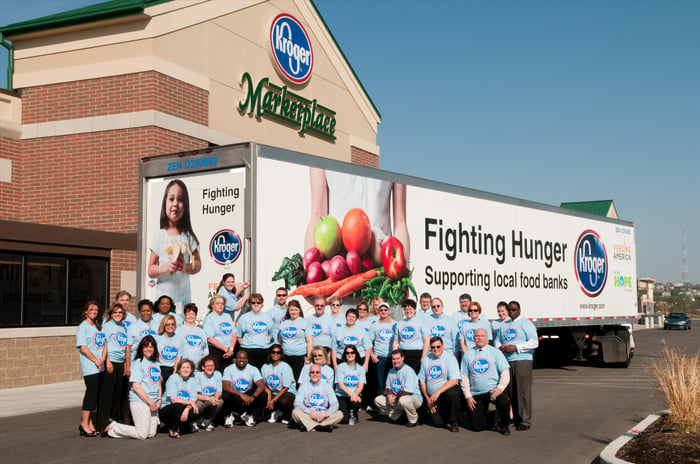 The blockbuster deal made clear Amazon's long-held ambitions in the grocery industry, and with Whole Foods' 444 domestic stores soon to be under its umbrella, the greatest disruptor of the 21st century is ready to take aim at the $800 American food retail industry.

Kroger shares took the news hard, with the stock falling as much as 17% after the announcement. The nation's largest traditional grocer could be the biggest potential loser in the deal since 60% of Whole Foods stores are located within 10 miles of a Kroger location, and Kroger is already struggling after two straight quarters of comparable sales declines following a 52-quarter streak of comparable sales growth.

While it would seem natural for Kroger to be wary of the Amazon-Whole Foods combination, at least one company executive isn't bothered by it.

At the Oppenheimer Consumer Conference last week, CFO Mike Schlotman said, "I actually fell great about it," when discussing Kroger's competitive position amid the Amazon-Whole Foods deal. "Something we're doing continues to resonate with the customer," he said, noting that Kroger has been gaining market share, despite falling comparable sales as food deflation has weighed on comp sales across the industry.

Schlotman seems to think that the threat of delivery and Amazon along with it is overblown, saying, "Part of me refuses to believe that everybody is just going to sit at home and everything is going to be brought to their doorstep and nobody is ever going to leave home to do anything again."

Schlotman is right, of course, about grocery delivery. Everybody isn't going to sit at home and never leave the house again, but e-commerce overall is growing by about 15% annually, and it looks set to continue at that pace, especially as Amazon pushes into new frontiers like groceries. Even Wal-Mart has gotten on board with its Jet.com acquisition and the rapid expansion of its grocery pick-up program. In its most recent quarter, domestic online sales surged 63%.

What Schlotman seems to be missing, though, is that grocery is a low-margin industry, and losing even 2% of its sales to the e-commerce channel is enough to damage its bottom line. Kroger stock also plummeted when it reported earnings the day before the Amazon news broke, as investors punished it for lowering full-year earnings guidance, a sign that the company is already facing steep competition.

It's a mistake to underestimate a juggernaut like Amazon. CEO Jeff Bezos famously once said, "Your margin is my opportunity," and the company has a way of pressuring industry margins wherever it goes, whether it be book publishing, shipping, or video streaming. Unlike traditional grocers, Amazon doesn't need to make a profit selling produce and dairy. It just wants more customers and more sales as it aspires to build a monopoly-like power by becoming a one-stop shop for everything online, and now in the real world, too.

Amazon's entry into groceries may not turn the industry upside-down, as some anticipate, but it will almost certainly affect competitors like Kroger. At the very least, I'd expect Whole Foods to lower prices significantly.

Kroger isn't standing still. The company's acquisition of Vitacost.com in 2014 gave it a valuable e-commerce platform, and it's been rapidly expanding its Clicklist grocery pickup program. It also partners with Instacart to make delivery available from some stores.

Still, at a time when the stock is at a two-year low and comparable sales and profits are falling, hubris is a bad look. Kroger has a lot of work to do recoup the stock's losses over the last month. Blowing off the threat from Amazon isn't going to help.