Please ensure Javascript is enabled for purposes of website accessibility
Log In Help Join The Motley Fool
Free Article Join Over 1 Million Premium Members And Get More In-Depth Stock Guidance and Research
By John Ballard – Jul 3, 2017 at 10:23AM

EA's lucrative Ultimate Team mode and the trend toward digitally delivered games is increasing gross margin, and these growth drivers have a while to play out.

With the video game industry's ongoing shift to a digital distribution strategy, Electronic Arts' (EA -1.52%) gross margin continues to expand, reaching 73.2% in fiscal 2017, up from 69.2% the previous year. This was due to continued growth in full game downloads, extra in-game content, subscriptions, and mobile game sales.

Management's initial guidance for fiscal 2018 calls for gross margin to reach 74.9%, driven by growth of its popular in-game feature called Ultimate Team, which lets players build their own teams and play against others', in addition to the release of Star Wars: Battlefront 2, and mobile game sales. Ultimate Team revenue was 17% of EA's $4.8 billion in total revenue last year, and grew 29% in the fourth quarter.

We'll take a look at the opportunities EA has with respect to Ultimate Team and full game downloading that could help gross margin expand well beyond fiscal 2018.

What is Ultimate Team? 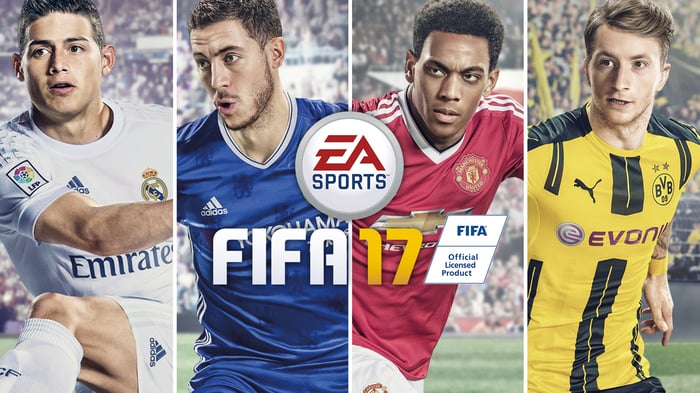 Ultimate Team essentially serves as the gateway to esports for EA's top two sports titles. With Ultimate Team, gamers purchase in-game card packs, featuring real-world athletes. Whichever athletes players draw from a pack, they can use those athletes in-game to assemble dream teams, which players can then take online to compete with others in competitive game mode.

This has become a very appealing feature for Madden and FIFA, the only two games to include the Ultimate Team feature. Ultimate Team revenue has been driven mainly by FIFA 17, one of the top-rated sports games on console, as well as being one of the top-streamed games on Amazon.com's Twitch.tv, which is a popular destination for esports enthusiasts. A new story mode was included with FIFA 17 which was very popular and brought more people to the game. In turn, those people tried out Ultimate Team, helping FIFA grow its Ultimate Team player base 13% year over year through the fiscal fourth quarter of 2017.

EA could expand Ultimate Team to other games

It's quite an accomplishment for EA that one virtual mode makes up nearly one-fifth of the company's total revenue, especially when you consider all of the big games the company makes, like Mass Effect, The Sims, Battlefield, the Star Wars games, along with its popular sports titles.

The company could potentially create an even bigger business out of Ultimate Team by spreading the feature to other titles in the catalog. At a recent investor conference hosted by Morgan Stanley, CFO Blake Jorgensen said the company is looking at adding a similar element like Ultimate Team to the other competitive titles in EA's catalog (Quote via Gamesindustry.biz):

Like Battlefield or Battlefront, [or] our Star Wars game, which are very similar in the depth of play -- we can possibly add a similar mechanic to that. We spend a lot of time thinking about it. ... Not for tomorrow, but over the next couple of years you're going to see a lot more of that in our portfolio.

While I'm not sure how an Ultimate Team-like feature might work in Battlefield, a military-based shooter game, it's easy to imagine how successful a similar feature could work in Star Wars: Battlefront, given the popularity of the Star Wars universe, with all of the interesting weapons, settings, and characters that franchise has available. It seems like content tailor-made for a virtual card game.

Along with Ultimate Team, continued growth in full game downloading can also keep EA's gross margin ticking up in the coming years. Full game download revenue grew 44% to $724 million and made up 33% of unit sales in fiscal 2017. As more gamers choose to buy games direct over console instead of physically in-store, it means less inventory, such as game discs the company has to produce, and that should help margins gradually move higher over time.

EA's gross margin expansion story is not over

Ultimate Team and full game downloads are just two factors impacting EA's gross margin. EA also has a growing revenue channel from mobile games that will help push digital revenue to a higher percentage of total revenue in the future. Altogether, EA has plenty of options to continue expanding margins well beyond the year ahead.