The China-based online retail giant has been crushing the market this year, and the bandwagon looks ready to keep rolling for years to come.

Retailers around the world have suffered mightily in 2017 as e-commerce alternatives kept up their pressure on traditional brick-and-mortar stores. Hence, Alibaba shares rose steadily from January to May, right alongside fellow e-tailing giant Amazon.com. Then Alibaba held a successful and convincing analyst day in early June, sending share prices skyward while Amazon's stubs took a small haircut due to this international competitor's apparent rise.

Alibaba's sales increased by 60% year over year in the recently reported fourth quarter, and that revenue growth is accelerating. You'll see a similar growth trend in Alibaba's free cash flows. The move from physical retail stores to a new e-commerce model is very real, and it's easy to read in Alibaba's financial results.

Looking ahead, Alibaba is exploring global growth while its home-market Chinese consumer base grows more affluent and able to afford the occasional retail splurge. This company is riding powerful economic trends, not short-lived fads. Look for Alibaba to continue its market-beating growth for years to come. 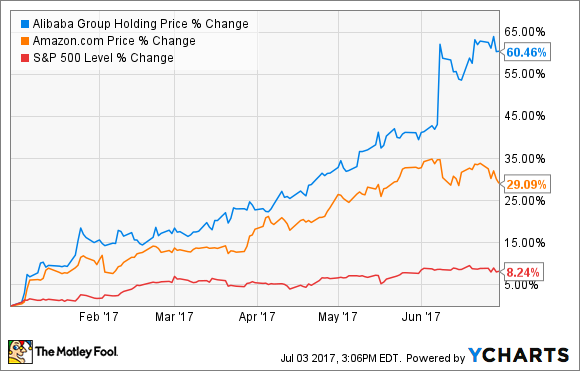