Michael Kors Holdings Ltd (NYSE:CPRI) shareholders experienced more pain when the company reported its 2017 fourth quarter earnings results last month. Total revenue decreased 11.2% to $1.06 billion and adjusted EPS fell to $0.73, a greater than 25% year-over-year decline. This type of disappointing performance is nothing new to long-suffering Kors' investors: The quarter was just the latest in a series of poor results that have absolutely punished the company's stock price in recent years.

What has kept many shareholders hanging on, though, including myself until recently, was the company's tantalizing valuation. For the fiscal year 2017, the company reported adjusted earnings of $4.21. This gives shares of the company a price-to-earnings ratio of just 8.2!

In today's fully valued market, valuations that low are certainly hard to find. Surely any trouble the company is currently experiencing is already baked into the price, right? Up to now, that has been my justification for holding onto shares but, after reviewing the transcripts provided by S&P Global Market Intelligence from the company's latest conference call and analyst investor day, I no longer believe this to be the case.

Even though the strategy and vision laid out by Michael Kors' management shows sharp reversal from previous practices, it still seems muddled. 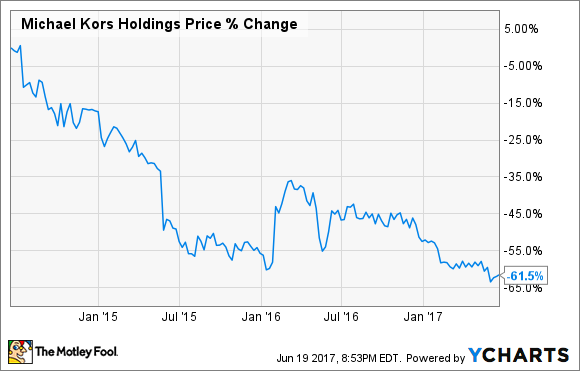 When the company reported its 2017 fourth quarter earnings, it announced a "retail fleet optimization" plan to reduce the number of its full-price retail stores by 100-125 locations over the next two years. The company expects to incur about $100-125 million in one-time charges for these closings but then expects to realize about $60 million in annual savings going forward. None of this should be surprising to investors as many retail companies have been reducing their store count by letting go of their least profitable stores.

What makes this egregious in the case of Michael Kors, however, was management's refusal to consider the changing landscape of brick-and-mortar retail as it aggressively expanded its store footprint the past few years. Consider: On April 1, 2017, the company operated 827 retail locations (not including licensed partners). Exactly one year prior to that, the company operated 668 stores. That's a 23% increase in just one year! Yet now the company wants to close at least one hundred stores over the next two years? 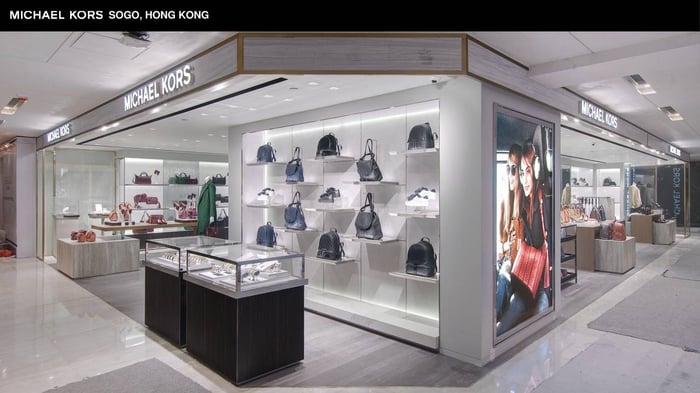 It's not like management hasn't been questioned on the company's questionable expansion strategy in the past. Declining mall foot traffic and the rise of e-commerce are not exactly trends that were unknown a couple of years ago. For instance, in 2016's second quarter conference call, CEO John Idol even admitted he was questioned on the company's rapid rollout plan regularly:

And again, as we've said to you many times, because you've all questioned us regularly, I might say, on why do you open more stores, well, we're profitable when we open more stores, and people, while online shopping is absolutely a trend that is going to move the needle for the company, people will still go out and shop in a store. That won't -- at least while I'm alive, won't have evaporated.

Contrast that statement with how Idol described the reasoning behind the decision to close stores given in the company's most recent conference call:

So what's happened is, is there's a number of stores in the fleet that are either going to -- they're either -- are now unprofitable or going to turn unprofitable, and that's as a result of declining revenues and because of declining traffic in certain...malls. We wouldn't call these the most high-profile locations, so we don't think it's going to do anything to the brand integrity by closing a number of these locations.

In less than two years Idol went from touting the profitability of Kors' stores and pooh-poohing the idea of e-commerce significantly affecting brick-and-mortar sales, to lamenting declining foot traffic and stores turning unprofitable. A little vision and foresight a mere year and a half ago could have saved the company-and shareholders-a lot of pain!

Management still doesn't get it

It's not just management's decision to close stores after its previous rapid expansion but, at first glance, it also seems a strange selection of stores to close. The compnay made it clear it would be "full-price retail stores" that it would be shuttering, not outlet stores. This despite Idol stating during the conference call that "our primary focus as a company is to sell full-price merchandise and present Michael Kors in the best and most appropriate exciting environment for our consumer." Indeed, throughout the conference call, management made it clear it was focused on raising the average selling price of its products.

If this truly is the company's goal, however, it seems to be a curious decision to close full-price retail locations and not discount stores in outlet malls. When Idol was asked this very question by an analyst during the company's Analyst/Investor Day earlier this month, he responded:

... the Outlet business today represents about 25% of our store count, if I remember it correctly. And that will go to about 30% of the store count as we close these other stores. So again, in our mind, we always kind of had this 2:1 ratio in our head. I can't sit here and tell you it was the right ratio or the wrong ratio, it was just something that we had kind of believed in.

What this amounts to is management saying; it might be right, it might be wrong, but don't worry, because we kind of believe in it. In today's data-driven world, playing retail with these types of hunches and guesses is fighting with one hand tied behind your back. Not exactly the stuff of Bezos, Jobs, or Zuckerberg.

Opening locations not only requires preparing a space but recruitment, hiring, and training of staff as well. What's more, new stores often cannibalize sales from nearby existing locations. Closing stores is costly too. More than $100 million in one-time expenses is nothing to sneeze at for a company this size. Surely significant cost savings could have been realized if management had made the decision to close stores before so rapidly expanding. Furthermore, Michael Kors doesn't seem to have a grip on what's the right mix for discount and full-price stores.

As a Foolish investor, I aim to hold great companies over a long time horizon, through ups and downs. Yet there is a time to sell. Though I probably should have seen it earlier, that time has come (and passed) for Michael Kors. Though the company remains tantalizingly cheap, I am no longer confident in the company's management to lead the company through this difficult and challenging retail landscape. Though the company could head higher quickly if it ever figures it out, I'll be sitting this one out on the sidelines.