Please ensure Javascript is enabled for purposes of website accessibility
Log In Help Join The Motley Fool
Free Article Join Over 1 Million Premium Members And Get More In-Depth Stock Guidance and Research
By Asit Sharma - Jul 5, 2017 at 11:20AM

You'll cover a wide swath of the freight industry by investing in these three great dividend plays.

The freight industry, which encompasses land, sea, and air shipping, as well as logistics, can be tricky for investors to master. Its various sectors experience cyclical success, and they don't always move in tandem.

For example, an oversupply of vessels alongside falling transport prices -- as measured by the Baltic Dry Index -- have hammered ocean-freight companies over the last three years. In the meantime, trucking, rail, and air-freight companies have seen stock-price improvements that have roughly tracked the broader-market's gains. 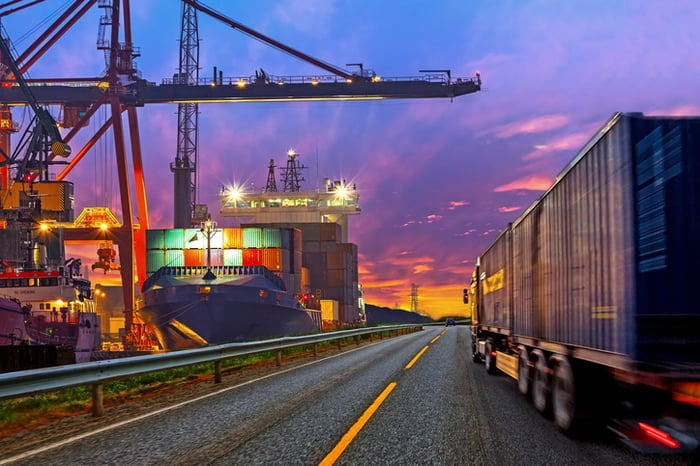 FedEx hasn't let its ubiquity and enormous reach keep it from growing. The global shipper actively seeks to increase volumes, and constantly prowls for accretive acquisitions. Its 2016 purchase of European competitor TNT Express, for $4.9 billion, boosted annual revenue by $7.4 billion, or about 15%.

Parallel to its revenue strategy, FedEx has operated in investment mode over the last few years to maintain its competitive advantages. The organization increased capital expenditures by 6.2% in fiscal 2017, and in the current 2018 fiscal year, management plans to ratchet up "CapEx" by more than 15%, to $5.9 billion. Modernization of the company's air fleet and expansion of ground capacity are the current focus of investment dollars.

FedEx has increased its dividend each year since 2010. The current quarterly payout of $0.50 produces an annualized yield of 0.92%. Now, a yield of just under 1% may not seem the most electric of returns. But since the company's April 1st, 2016 dividend check of $0.25, it's doubled the size of the quarterly payout in just over a year. Because FedEx's stock has soared 33% since that payout, the yield has remained compressed, masking the benefit investors are receiving.

With a payout ratio of just 20.4%, the FedEx dividend has quite a bit of room to expand. And in buying this company, an investor can participate in the air, ground, and logistics sectors of the freight industry through a relatively safe and dominant player.

A true freight giant like FedEx, Union Pacific's vast 32,100 miles of track cover the western two-thirds of the U.S. But the organization is deeper into global commerce than most people realize. A decent portion of the railroad's freighted products end up as exports, as many of its lines terminate at points within an extensive port network:

Over the last three years, Union Pacific's revenue has weakened, as both volume and average revenue per carload have declined, particularly in coal and industrial products. Last year's $19.9 billion in overall revenue represents a drop of 17% from 2014's $23.9 million top line. Yet, through productivity improvements and a tight control over capacity, Union Pacific has maintained its operating margin of 36.5% over the same period.

Squeezing equivalent operating income over declining revenue dollars has kept investor confidence high -- since the beginning of 2014 to date, UNP has posted an annualized total return of roughly 12%.

Union Pacific's dividend-increase streak also extends back to 2010. Investors enjoy an annualized yield of 2.2% on the quarterly payout of $0.605. While the rail-company's payout ratio of 44% isn't as low as FedEx's, it's still a quite reasonable reading, which also indicates room for future dividend bumps. On balance, an investment in UNP should provide steady price appreciation and favor those who reinvest their quarterly dividend checks.

Thomasville, North Carolina-based Old Dominion Freight Line has prospered by focusing on a single portion of the trucking industry: LTL, or less-than-truckload services. As opposed to a truckload shipment, in which a single customer's goods are delivered from point A to point B, a typical LTL shipment contains numerous items from a variety of customers that are headed to multiple destinations. LTL shippers operate network service centers to move goods between trucks en route to their final destinations.

By methodically expanding its network service centers, Old Dominion has grown from the seventh-largest to the fourth-largest LTL shipper in the U.S. over the last seven years. And it hasn't sacrificed profitability for growth: During the same time period, net annual profit margins have increased from just over 3% to 10%.

While the ODFL ticker is somewhat volatile, the stock has outperformed the market -- and most other transportation companies -- as of late, gaining a cool 226% over the last five years.

Old Dominion doesn't boast of a long dividend streak. In fact, it issued the first dividend in its history only in March of this year. The new $0.10 quarterly dividend equates to an annualized yield of just 0.41%. But this represents an enticing opportunity for dividend investors.

Old Dominion generates ample cash: Last year, it converted roughly 20% of each revenue dollar into operating cash flow. In addition, the company has very little debt on its books. At the end of the first quarter of 2017, the company held just $95 million in long-term debt against $2.2 billion in net property and equipment.

Given the organization's profitability, cash generation, low leverage, and a dividend payout ratio that measures less than 3%, Old Dominion's inaugural dividend is ripe for steady increases. For example, just to bring the dividend in line with the 1% yield of the S&P Transportation Select Industry Index (a relevant benchmark index), the company would have to increase the current quarterly payout nearly 2.5 times -- a potential boon for dividend investors. So buy less than a truckload, but do add in Old Dominion to complement investments in dividend stalwarts FedEx and Union Pacific.