The Nasdaq 100 has dramatically outperformed the broader stock market, climbing 16% so far in 2017. That's roughly double the gains of benchmarks like the S&P 500, and it reflects the strong performance of many of the technology stocks that make up the Nasdaq 100. However, none of the top three performers in the index so far this year are actually pure technology stocks, although they all rely on and have driven forward technological advances of their own. Below, you'll learn how Vertex Pharmaceuticals (NASDAQ:VRTX), Tesla (NASDAQ:TSLA), and MercadoLibre (NASDAQ:MELI) have done so well to start 2017 and what lies ahead for the three outperformers going forward. 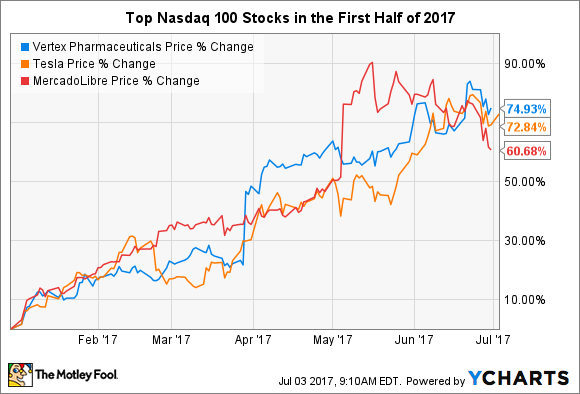 Vertex Pharmaceuticals has dedicated itself to the fight against cystic fibrosis, a genetic disorder that has dramatic impacts on the lungs and parts of the digestive system. The approval of Kalydeco in 2012 was a groundbreaker for the company, and the later approval of combination therapy Orkambi in 2015 showed that Vertex has every intention of helping the widest possible population of sufferers of cystic fibrosis to get the relief they need.

2017's gains for Vertex come largely from phase 3 trials of tezacaftor, another drug that the company is testing in relation to cystic fibrosis. Both of the trials involved using the new drug in combination with Kalydeco, and taken together, the data supported findings that the combination works better than a placebo and in some cases better than Kalydeco by itself. Moreover, as Vertex continues to look to expand the allowed indications for its already approved drugs, the company expects to broaden its reach and capture more profits from serving a larger number of patients. If that happens, then the stock will likely have further to run.

Tesla has also seen its stock soar so far in 2017, and progress on a number of fronts has kept the electric car giant moving forward. CEO Elon Musk has done a good job of developing the big-picture story of Tesla's future, which includes not only the near-term launch of the mass-market Model 3 vehicle but also the newly planned Model Y crossover, pickup truck, and even a commercial semi truck. 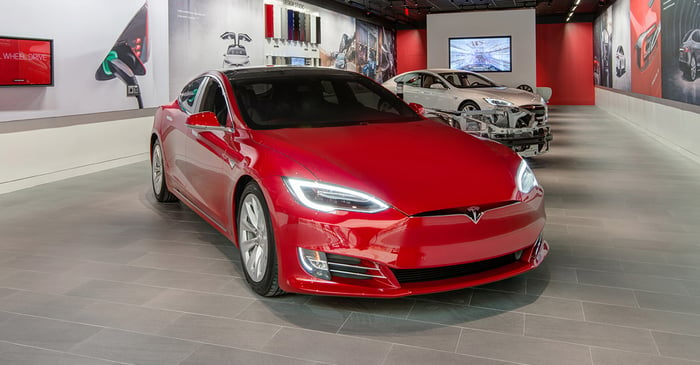 Tesla has made headlines as its market cap has soared beyond those of well-established auto giants in the industry. With the impending launch of the Model 3, Tesla will have to meet expectations about deliveries and execution in order to satisfy growth investors looking for proof of concept from the automaker. However, as long as Musk and his team can keep building long-term potential for the company, Tesla investors will stick with the stock.

Finally, MercadoLibre has posted impressive gains, and most of them have come about as a result of renewed strength in the Latin American economy. The company's focus on e-commerce has given it the status of a regional powerhouse, and like its U.S. counterparts, MercadoLibre has sought to expand its scope to capture a broader range of businesses and services. Starting as an online marketplace, MercadoLibre has built out an electronic payment processing company, a shipping service, and a financing company to help customers make purchases more efficiently.

MercadoLibre has more potential for growth ahead because of the relatively undeveloped nature of the e-commerce market in Latin America. Many transactions in the region still occur in cash, giving the company's MercadoPago service a lot of upside potential. Despite extremely high valuations, MercadoLibre is still growing at a healthy clip, and after years of tough conditions in Latin America, recent rebounds suggest that a new wave of growth could help support the consumer economy in key nations throughout the region. Even if the stock pauses here, MercadoLibre has plenty of potential for gains in the future.

These three stocks have done extremely well so far in 2017, and each of them has the capacity to move higher from here. If they do, then they could help drive the Nasdaq 100 toward even better performance during the rest of the year and beyond.