Please ensure Javascript is enabled for purposes of website accessibility
Log In Help Join The Motley Fool
Free Article Join Over 1 Million Premium Members And Get More In-Depth Stock Guidance and Research
By Timothy Green - Jul 6, 2017 at 7:30AM

IBM, Qualcomm, and Chipotle all have something to prove this month.

With July 4 celebrations in the rearview mirror, investors can now turn their attention to the slew of quarterly reports coming down the pike this month. International Business Machines (IBM 0.79%), after a weak first-quarter report, will need to convince investors that an eventual return to revenue growth is in the cards. Qualcomm (QCOM 0.57%) is facing a different kind of challenge, with Apple withholding royalty payments because of an ongoing lawsuit. And Chipotle Mexican Grill (CMG -1.64%) is faced with the task of winning back customers after sales plunged last year.

Here's what investors need to know about these three companies' upcoming quarterly reports. 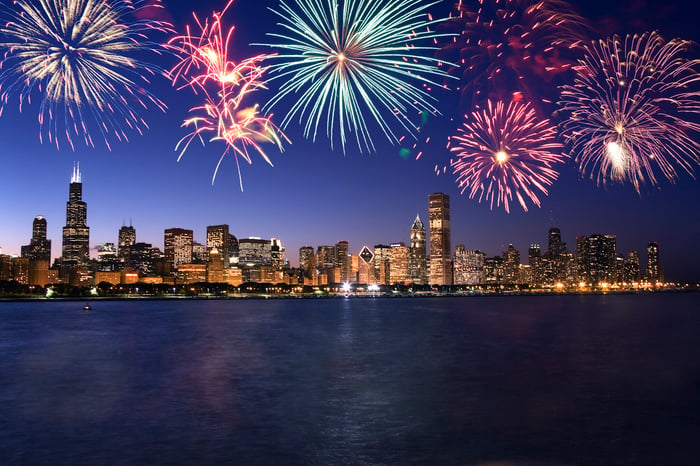 IBM disappointed investors when it last reported quarterly results in April, falling short of expectations by reporting a 2.8% year-over-year revenue decline. The company blamed a delay in closing a few major services deals for the revenue weakness. IBM still expects adjusted earnings per share to rise this year, but after five years of declining revenue, the stock is unlikely to recover without a return to revenue growth.

At least one of those delayed deals has since closed, with IBM signing a $1.7 billion cloud services agreement with a major U.K. financial institution. IBM will report its second-quarter results after the market closes on July 18, and it will need to show that the first quarter was indeed a blip. Another revenue miss could send the stock tumbling.

On the other hand, if IBM produces better-than-expected results, the stock could soar. Shares trade for just 11 times the company's adjusted earnings guidance, and there's the potential for margin to expand in the coming years as software-heavy businesses account for a larger percentage of total sales. The narrative at the moment is that IBM is struggling to compete against cloud-computing rivals. IBM needs to change that narrative by returning to growth.

Apple sued Qualcomm for $1 billion earlier this year, with the iPhone giant claiming Qualcomm charged unfair royalties and withheld payments. Apple escalated the battle by withholding payments to its contract manufacturers for the royalties those manufacturers owed to Qualcomm. With no sign that this behavior will cease, Qualcomm was forced to slash its third-quarter guidance.

Qualcomm will report its results on July 19 after the market close. The company expects revenue to take a $500 million hit thanks to Apple's tactics, and for non-GAAP EPS to decline by as much as 35% year over year. Qualcomm's previous guidance assumed that at least some payments would be made, but it now appears that any payments will be insignificant.

With the potential for the Apple lawsuit to drag on for quite some time, Qualcomm may be facing a prolonged period of lower revenue if payments continue to be withheld. Management will probably speak at length about these issues on the conference call, and fourth-quarter guidance will reflect the lack of Apple-related payments, assuming nothing has changed on that front.

Analysts are expecting adjusted EPS to decline in fiscal 2017 and 2018, in part because of these issues, although the range of estimates is wide, reflecting the elevated level of uncertainty surrounding the company. Investors will learn more about Qualcomm's long-term view later this month.

Fast-casual pioneer Chipotle continues to recover from the food-safety crisis that led sales to plunge last year. Comparable sales are growing again, with the company expecting a high single-digit percentage increase this year. Sales will still be well below peak levels, but Chipotle has at least stopped the bleeding.

Chipotle will report its second-quarter results after the market closes on July 25. Marketing costs are expected to rise by 20 to 30 basis points compared with the first quarter, thanks to a new advertising campaign, which will lead operating costs to increase as a percentage of revenue. Whether Chipotle can bring marketing costs down to pre-crisis levels while still growing sales is an open question.

Analysts are expecting Chipotle to produce earnings of just $8.21 per share this year and $12.08 per share next year, below a peak of $15.10 per share in 2015. The stock trades for around 27 times peak earnings, suggesting that investors are optimistic that a return to form is coming soon. If Chipotle's turnaround falters in the next few quarters, some of that optimism may disappear.