If you're interested in buying a bank stock, one of the first that's likely to come to mind is Bank of America (NYSE:BAC). But given its performance through the financial crisis, you'd be excused for wondering how risky its stock is.

Will it expose your portfolio to losses? Or is it a stock that will allow you to rest easy at night?

With this year's stress tests in the rearview mirror, we have a pretty good idea of how risky Bank of America's stock is.

The overarching purpose of the stress tests is to see whether banks have enough capital to survive a severe downturn in the economy, one in which the unemployment rate hits 10% and stock and real estate prices plummet, among other things. The Federal Reserve determines this by estimating what would happen to the value of a bank's assets under adverse conditions like these.

The key for a bank is to be able to maintain a 4.5% common equity tier 1 capital ratio, also known as a CET1 ratio. There's no reason to delve into the details of this measure other than to say that it reflects how much high-quality, highly liquid capital a bank holds on its balance sheet relative to a risk-adjusted estimate of its assets.

A bank that can maintain that ratio not only passes the stress tests -- or the first round of the tests, anyway -- but would also presumably be able to make it through an acute economic downturn without having to dilute shareholders. And it was this dilution that caused so much damage to Bank of America's stock in the last crisis after the bank, to raise capital, more than doubled its outstanding share could by selling shares at a deep discount to its book value. 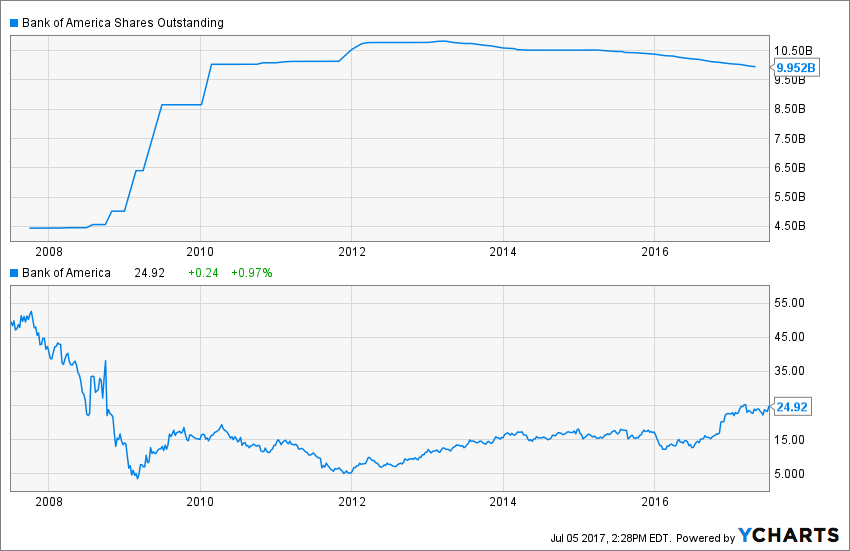 Bank of America and the stress tests

Based on the results from this year's stress tests, Bank of America most likely wouldn't have to dilute shareholders in the same way in a future crisis. That's because the Charlotte, N.C.-based bank has more than enough capital to survive even an acute downturn without having to issue more shares.

It's true that Bank of America was projected in this year's tests to suffer a $26.4 billion loss over the test's nine-quarter time horizon, concentrated most heavily in loan losses, but the nation's second biggest bank by assets nevertheless emerged from the Fed's hypothetical gauntlet with more capital than it's required by regulators to hold.

Going into the stress tests, Bank of America's CET1 ratio was 12.1%. The figure fell to 8.9% after being subjected to stress, but it was still nearly double the 4.5% regulatory minimum a bank must maintain for industry overseers to consider it sufficiently capitalized.

How Risky Is Bank of America Stock? @themotleyfool #stocks $BAC Next Article
Current