Few businesses have as strong of a track record of long-term success and shareholder wealth creation as Walt Disney (NYSE:DIS). The entertainment titan's empire spans across theme parks, cruise ships, movie studios, cable and broadcast TV properties, and a powerful consumer products division. Its vast collection of brands -- including Pixar, Marvel, Lucasfilm, and, of course, Disney itself -- is unmatched. All of this has helped the global entertainment distribution machine deliver strong revenue, profit, and cash flow growth for decades, making longtime investors a fortune along the way. 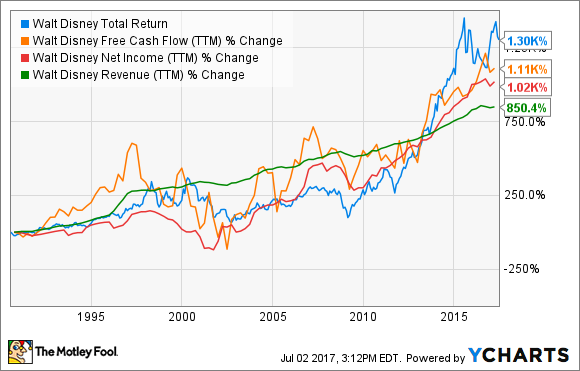 On that note, here is the major bear argument against Disney. 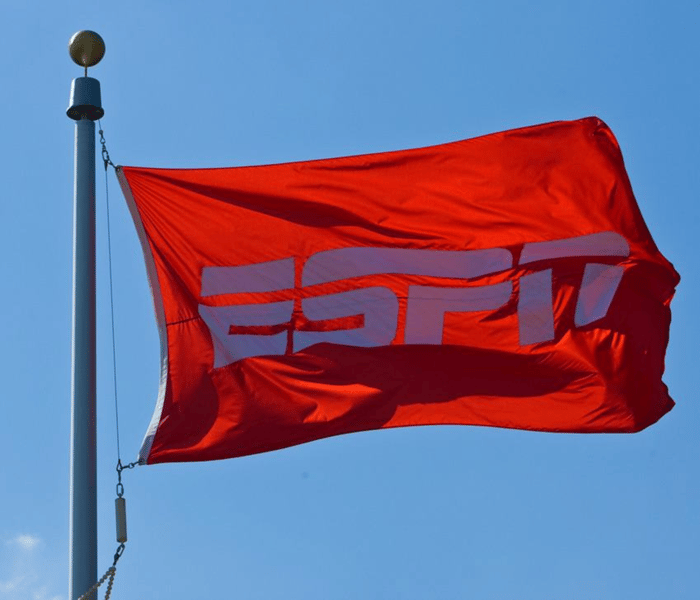 The staggering growth of online streaming video services such as Netflix, Amazon Prime Video, and Hulu has contributed to an accelerating number of people canceling their cable subscriptions. These cord-cutters are bad news for sports entertainment titan ESPN, the crown jewel of Disney's media properties that's responsible for about a quarter of its operating income, some $4 billion in annual cash profits.

ESPN has bled more than 13 million subscribers in recent years, from a peak of about 100 million in 2011 to less than 87 million today, according to Nielsen. Furthermore, the people who do still subscribe to ESPN are tuning in less frequently to watch sporting events and highlight shows. Even SportsCenter -- ESPN's flagship sports news program that some have called the most valuable show on TV -- has seen its audience decline sharply over the last decade.

Although viewership has declined, the cost of rights to live sports events has risen significantly. Big games still draw large audiences, and competition for those eyeballs is increasing. Rival Fox Sports continues to bid aggressively on the rights to college football, soccer, baseball, NASCAR, and mixed martial arts in an attempt to close the ratings gap with ESPN. And powerful new entrants recently entered the arena, such as Twitter and Amazon paying hefty sums to live stream NFL games.

These trends have reduced investors' excitement for Disney's stock. Shares are down about 12% from their highs reached back in August 2015, even as earnings per share are up more than 17% during that time. In other words, Disney's price-to-earnings multiple is down sharply as investors are now reluctant to pay as much for every dollar of earnings due to the uncertainty surrounding ESPN and Disney's other cable properties. 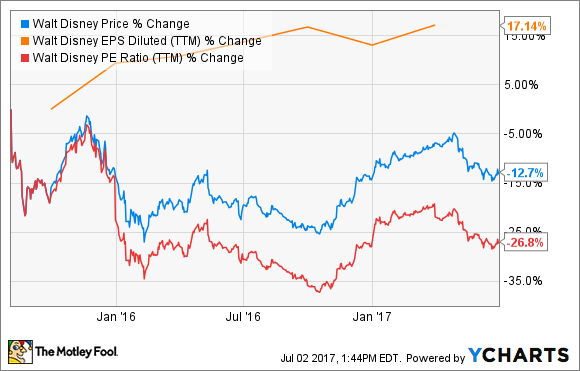 Some investors have gone so far as to call for a spinoff of ESPN in order to give shareholders the option to decide for themselves whether they want to continue to own the sports network. The idea is that those who are comfortable with the risks surrounding ESPN would be able to invest in it directly -- and those who aren't can still choose to invest in a more streamlined Disney that would not be as exposed to the threats currently facing ESPN. In theory, both businesses would then be valued more highly by the market than they currently are as a combined entity.

However, Disney has resisted doing so. Instead, the company is slashing costs at ESPN, including layoffs of popular -- and highly paid -- sports commentators.

Moreover, Disney has made ESPN available on many of the most popular streaming services and "skinny bundles" -- cheaper TV packages with fewer channels -- including Sling TV, Hulu, DIRECTV Now, PlayStation Vue, and YouTube TV. In fact, some analysts believe the subscribers ESPN gains from these deals could largely offset its traditional cable subscriber losses in the years ahead.

Additionally, Disney intends to launch its own direct-to-consumer ESPN-branded streaming service later this year. Management says the service will be largely complementary to its existing ESPN programming and should, therefore, allow the network to maximize the value of its sports rights without cannibalizing its cable business, or jeopardizing its affiliate relationships. It's also possible that the service could eventually evolve into a full-fledge stand-alone streaming option.

Winners tend to keep on winning

ESPN has been underestimated before -- and each time, it was a mistake. Skeptics doubted its survival and the entire premise of an all-sports network when it launched back in 1979. And ESPN was largely an afterthought when Disney acquired 80% of the network in its acquisition of ABC in 1996. Yet in the years that followed, ESPN went on to dominate sports entertainment.

Whether it remains a part of Disney, is sold to another company, or returns to the markets as an independent enterprise via a spinoff, ESPN will continue to be a powerful force in sports with a large and passionate fan base. As such, it should not be taken lightly, and it's quite possible -- perhaps probable -- that today's skeptics will also be proven wrong.

Greater than the sum of the parts

More importantly, Disney's business remains strong when viewed as a whole. While operating income in its media networks declined 3% year over year in the second quarter, companywide revenue increased 3%, operating income rose 5%, and earnings per share jumped 10% on an adjusted basis and 15% on a GAAP basis. These are not the financial results of a business in distress.

Disney's growth was driven by strong performances in its parks and resorts segment, fueled by stellar attendance at its new Shanghai Disney resort. Studio entertainment results were also solid, with video-on-demand results powered by the home entertainment releases of recent hit movies like Moana.

This highlights the power of Disney's diverse revenue streams: When one division falters, others are there to pick up the slack. It's a formula that's allowed Disney to deliver wealth-generating returns to its shareholders for decades -- and it will likely continue to do so for many years to come.

The Walt Disney Company: The Bear Case From a Bull @themotleyfool #stocks $DIS Next Article
Current