The cruise industry is cresting, but that's not all that's driving the stock prices of these three well-known leisure travel companies.

The "big three" cruise lines are benefiting from a number of concurrent trends. Lower fuel prices, higher consumer spending in developed countries, and burgeoning travel demand among Asian tourists are three of the most significant current drivers of recent cruise industry success.

In addition, as I discussed recently in an article on the best cruise-line dividends, the cruise industry has expanded its passenger counts at a solid 4.5% compounded annual growth rate, or CAGR, since 2009. This is a function of the factors above, but also reflects the travel preferences of baby boomers and an increasing penchant among millennials to spend their earnings on experiences instead of material products.

The cruise passenger CAGR is noticeable for its smooth ascent and general lack of volatility: 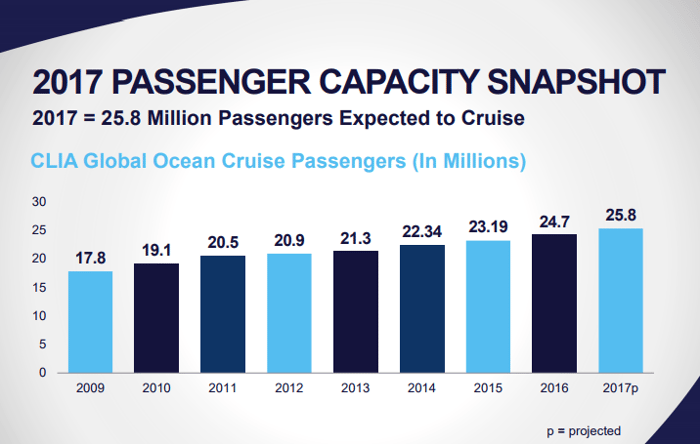 Steady and nearly predictable passenger growth has allowed this dominant trio of cruise lines to plan capacity in a rational manner, adding new ships to their fleets at a pace that can be absorbed by market expansion.

For investors, there's another implication of a steady 4.5% CAGR. In a good year, in which pricing holds steady, each of these cruise companies has the theoretical capacity to bump total revenue by at least the passenger growth rate, if not by a few percentage points more.

Indeed, in Q1 2017, Carnival and Norwegian showed top-line improvements of roughly 6.5%, while Royal Caribbean boosted its revenue versus the prior year by 4.7%. 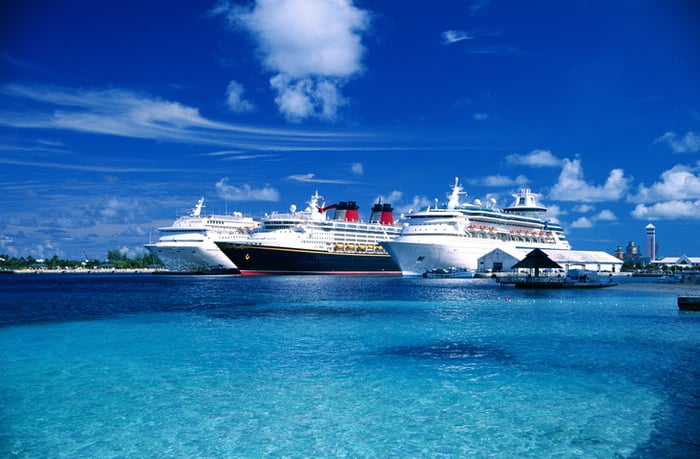 The first quarter of 2017 appears to bode well for the coming quarters. Each of the cruise lines reported a robust "wave season," characterized by both solid bookings and pricing power. Wave season, which typically occurs from January through March, marks the three months in which a majority of vacation cruise travel is booked, and it's a period of heavy promotion and competition among cruise lines.

Norwegian Cruise Lines CEO Frank Del Rio notably remarked during the company's first-quarter earnings conference call that the 2017 wave season was the strongest that Norwegian -- and likely the industry -- had seen "in quite some time."

And so far this year, Carnival, Royal Caribbean, and Norwegian are each efficiently managing their capacity and revenue per passenger. Alongside financial reporting for the most recent quarter, all three organizations raised expectations for full-year 2017 net revenue yields (net revenue divided by total available passenger cruise days). Carnival projects an increase in net yields of 2.5% this year, close to Norwegian's expectation that net yields will rise 2.25% in 2017. Royal Caribbean expects its net yields to grow between 4% and 5.5% by year-end.

The torrid year-to-date performance of these industry leaders may unnerve some investors, yet it's quite possible that all three could hold onto their gains, and perhaps even appreciate more in the coming months. Here's some context to consider: 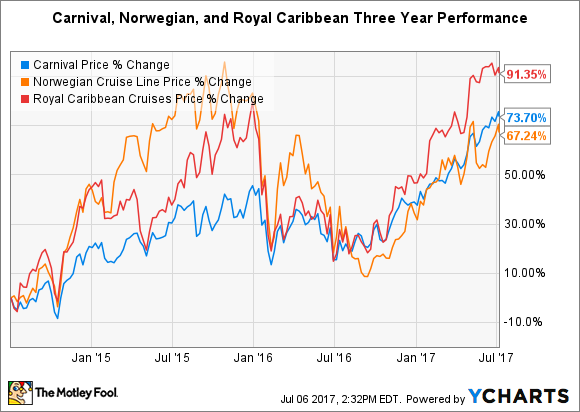 This time last year, the uncertainty surrounding Brexit weighed heavily on cruise-industry stocks, which rely on European passengers as a core revenue stream. That uncertainty has dissipated. As the chart above demonstrates, the recent price movement of cruise stocks, in addition to industry trends and strong operational fundamentals, also represents a resurgence from steep declines that hit a trough in the summer of 2016.

Thus, looking forward, as long as the global economy can continue to exhibit modest growth, these leading cruise lines may ply within a sweet spot on the high seas. Travel trends, efficient operations, and moderate valuations point to a decent back half of 2017, and perhaps beyond.