And it's not enough to offset DISH Network's satellite-subscriber losses.

Sling TV has attracted over 2 million subscribers since its debut at the beginning of 2015, according to data from Comscore. The over-the-top (OTT) live-streaming service was one of the first of its kind, paving the way for Sony's ( SONY 0.81% ) PlayStation Vue and AT&T's ( T 0.06% ) DIRECTV Now. Those competitors combined for just 1.1 million subscribers.

Despite the success of Sling TV, its parent company DISH Network ( DISH 3.94% ) is still bleeding subscribers. Management says Sling TV can help make up for the downward trend in subscriber count, but investors should have doubts. Nonetheless, it's safe to say Dish would be much worse off without Sling. 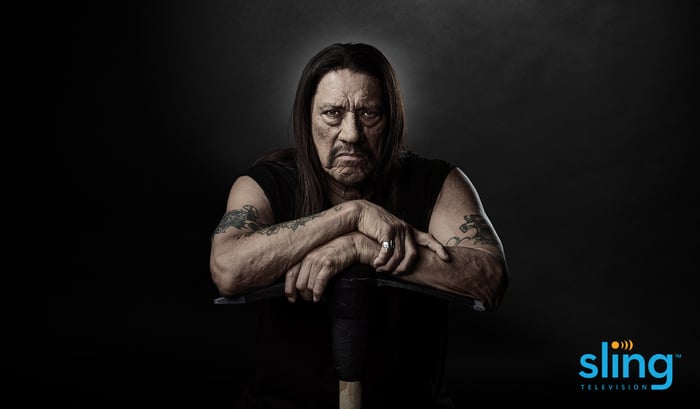 Sling TV launched months before PlayStation Vue and nearly two years ahead of DIRECTV Now, but the biggest reason it's been able to dominate the market is because it's actually targeting a different market. Vue and DIRECTV Now are complete cable TV replacements. They even have the same tiered pricing structure as cable, for the most part.

Sling is actively targeting a different segment of the population compared to Sony and AT&T. Sling TV eschews local broadcasters, while Sony and AT&T are trying to get more to come onboard. Additionally, it offers two separate base plans of channels that give subscribers a bit more control over which channels they take, and which ones they don't. On top of that, it has several add-on packages that subscribers can pick from.

The way Sling is packaged often allows customers to get more of what they want for less. That's particularly appealing to cord-nevers, who skew toward single-person, lower-income households.

That strategy has allowed Sling TV to attract a lot more subscribers than Sony and AT&T, which are more targeted toward cord-cutters, who are typically looking for something to completely replace cable. By comparison, cord-nevers don't have the same ingrained television habits, so a few extra channels for $20 presents excellent value.

What's more, Sling TV subscribers generate much lower revenue than satellite customers. While DISH's average revenue per user (ARPU) has climbed from $83.77 to $86.55 since launching Sling, that number is starting to trend downward. In the first quarter of last year, DISH generated $87.94 per subscriber every month. Comparatively, AT&T's video subscriber ARPU continues to trend upward.

Management argues that lower revenue isn't a big deal because Sling has lower costs. Customer acquisition costs are lower, installation costs are practically non-existent, and programming costs are naturally lower, as well. But if you look at the lifetime value of a subscriber, the satellite business is far more valuable to DISH. Replacing a satellite subscriber with a Sling subscriber is not an even trade.

Competitors are facing a similar problem. AT&T lost 233,000 traditional video subscribers last quarter between DirecTV and U-Verse. Meanwhile, DIRECTV Now experienced a hangover from its aggressive promotions, and the margins and lifetime value of the OTT service is likely lower than the services it's replacing.

While Sling TV is proving very popular with customers, DISH still isn't in a great position with its television business.